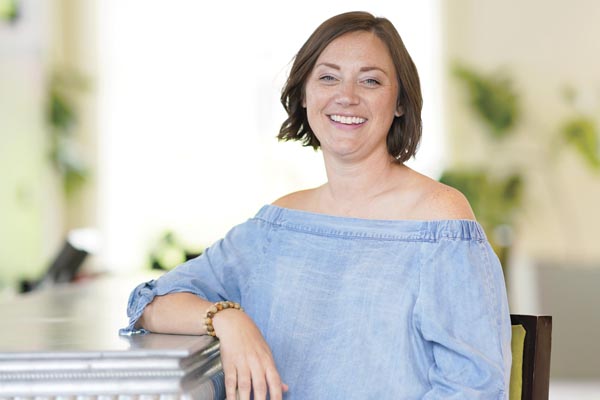 If you came across Brooke Thomas with her family and friends “eating their way through Nashville,” as she describes it, you’d never know she was really there for cancer treatment at Vanderbilt-Ingram Cancer Center. Thomas has metastatic triple-negative breast cancer, and admits that in the beginning she was often asking herself, “Why me?” But she soon flipped the question on its head and asked instead: “Why not me? Why would I be any different from anybody else?”

Thomas has leaned on 12 years of experience as a medical social worker and found ways to stay positive and upbeat through it all — and she has a lot to be positive about these days, thanks to an amazing response to her treatment as part of a clinical trial at Vanderbilt-Ingram. The trial involves PARP inhibitors, a class of drugs with an expanding role in cancer treatment.

A resident of Athens, Georgia, Thomas was referred to Ingrid Mayer, MD, MSCI, Ingram Professor of Cancer Research and co-leader of the Vanderbilt-Ingram Breast Cancer Research Program, by her local oncologist, who had trained under Mayer as a resident at Vanderbilt. She phoned Mayer to check about clinical trial options, and just one week later, Thomas made the first of many road trips to Nashville.

During their initial meeting, Mayer explained to Thomas that PARP inhibitors might work well for her because she has a BRCA 2 mutation. “The analogy is, if you’re deficient in BRCA, it’s like having a table with three legs. If you give somebody with a BRCA deficiency a PARP inhibitor, you’re knocking down another leg — and on two legs, the table can no longer stand. That’s why cells that are BRCA deficient die when exposed to a PARP inhibitor,” said Mayer.

The clinical trial, led by Vandana Abramson, MD, associate professor of Medicine, aims to treat patients with BRCA-mutated breast cancers by combining immunotherapy with PARP inhibitors. Since starting the trial in October 2019, Thomas has had a great response. She’s now close to a 50% reduction in her tumors — a response Mayer is very happy about.

“[Thomas] is extremely intelligent and extremely upbeat, and she has a wonderful attitude. She’s a go getter. I enjoy immensely seeing her and I’m grateful she’s doing well, just because she’s just such a pleasure to interact with,” said Mayer.

David Cortez, PhD, professor of Biochemistry and Ingram Professor in Cancer Research, has studied PARP inhibitors for 10 years now — before the first one was approved by the U.S. Food and Drug Administration (FDA) in 2014 as a treatment for BRCA-mutated advanced ovarian cancer. Since then, PARP inhibitors have been approved for other uses, including types of breast cancers, pancreatic cancers and peritoneal cancers.

To explain how PARP inhibitors work in cancer treatment, Cortez likes to think of it like a Goldilocks scenario. He says that normal healthy cells have perfect amounts of DNA repair capacity, which is the ability for cells to fix DNA damage and make sure that new cells contain the right genetic information. Cancer cells have lower levels of DNA repair capacity — but the level is “just right” for them, since it allows them to keep creating new mutations, though not so many that the new cells can’t survive. If you apply a PARP inhibitor to those “just right” cancer cells, it can push them over the edge so that they can no longer fix their DNA damage, and die as a result.

Specifically, what the PARP inhibitor does is stop PARP enzymes from being able to do their essential job in DNA repair. The reason PARP inhibitors work best in patients with BRCA-mutated cancer is because the cancer cells in these patients are already impaired at fixing their DNA through the BRCA repair pathways. So, adding a PARP inhibitor makes it even more difficult to accomplish necessary DNA repairs, and then it’s nearly impossible for the cancer cells to stay alive.

But, as with most biological phenomena, it’s not exactly that simple. “In my lab, we are interested in the mechanism of action of PARP inhibitors. It turns out that the simple description of how we think they work, while true, is incomplete. As we’ve learned more and more, there’s more and more complexity,” said Cortez.

Thus, the exact mechanisms of PARP inhibitors are still emerging through the ongoing important work of Cortez and many other labs. Cortez also notes that the development of PARP inhibitors took a very long time, and it wasn’t obvious all along that they were going to work.

“The reason that PARP inhibitors ended up being approved as a cancer therapy was because of the basic science that laid the groundwork to understand how to use them, who to use them in, and how they work. And it’s really that basic science foundation that is critical for all cancer therapies,” said Cortez.

Despite not knowing all the answers just yet, for many patients like Thomas, PARP inhibitors do work extremely well. In April 2020, the FDA approved a PARP inhibitor for newly diagnosed advanced ovarian, fallopian tube or primary peritoneal cancers, regardless of BRCA status.

Marta Crispens, MD, MBA, professor of Obstetrics and Gynecology and director of the Division of Gynecologic Oncology, said PARP inhibitors have proven to be an effective treatment.

“The most exciting thing in the standard care setting is that if you look at the data from the upfront maintenance trial, you just never see that sort of prolonged response to really anything. Those survival curves are amazing — the difference in the progression-free survival is huge. That’s very exciting, and says that patients who have a BRCA mutation can really, really benefit from this, and really do much better than they would have otherwise,” Crispens said.

Fortunately, new data is starting to show that PARP inhibitors are also promising for patients without BRCA-mutated cancers. Research is currently underway in a clinical trial led by Crispens at Vanderbilt-Ingram that uses PARP inhibitors in patients with non-BRCA mutated recurrent ovarian cancer. As part of the trial, patients receive a PARP inhibitor with another anti-cancer agent to determine whether it’s possible to induce an environment that will make the tumor respond to the PARP inhibitor.

“The idea is that even if you don’t have a BRCA mutation, we can make the tumor work that way by some manipulation. So, we might be able to expand the appropriate use of PARP inhibitors beyond the subgroups where they are currently very active. That’s why we’re kind of excited about this — both for the potential for ovarian cancers as well as the potential for other tumors,” said Crispens.

One reason to expand the use of PARP inhibitors to as many cancer types as possible has to do with the unique advantages they offer compared to other common cancer treatments. Thomas likes that it’s a pill she can take at home, and she’s had very minimal side effects. “I’m still exercising, and doing stuff with my kids all the time. I mean, just kind of living a normal life, I would say,” she said. 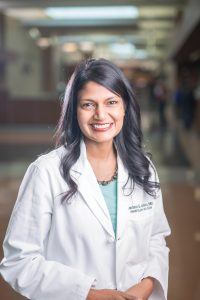 Mayer is glad to be able to offer a treatment like PARP inhibitors to her patients. “It’s a less toxic, more effective, more targeted type of medication than non-selected treatments like chemotherapy,” she said.

Ronald Alvarez, MD, MBA, professor and chair of the Department of Obstetrics and Gynecology, agrees with Mayer. “For so long, all we had for ovarian cancer was surgery and chemotherapy. This drug plus other targeted drugs are really starting to allow us to have a broader toolbox of agents that we can utilize in ovarian cancer, so that’s exciting to me,” he said.

At present, the main downside to PARP inhibitors is that, just like most cancer treatments, patients eventually develop resistance to them and then treatment stops working. This is where Cortez’s research to understand how PARP inhibitors work on the molecular level becomes so essential.

“What we’ve found, and other groups have found in other studies, is that there’s other functions for PARP that are involved in what seem like very complex ways of replication-coupled DNA repair, and these other mechanisms of PARP function turned out to be important for resistance, at least in cells. Whether they are also important in people is what we’re actually currently trying to discover,” said Cortez.

Cortez is collaborating with Abramson on an upcoming clinical trial to study why and how resistance occurs. “We want to be ready to give those patients another option, or a combination therapy that might prevent that resistance mechanism from developing,” said Cortez.

Abramson is excited about this new collaborative work. “The new study will offer patients whose cancers are progressing on olaparib [a PARP inhibitor] an opportunity to potentially reverse that resistance. Biopsies before treatment will help us figure out which patients are most likely to respond,” she said.

Mayer is hopeful about the potential for the new clinical trial to help patients in the future. “The clinical trial that Cortez and Abramson are developing is so important because if this is going to happen to all patients who have stage IV BRCA-mutated cancers, we do need a way out that is better than what we’re doing right now,” she said.

Between multiple clinical trials and cutting-edge basic science research, Vanderbilt-Ingram is at the forefront of PARP inhibitor therapy. Patients like Thomas are grateful to a network of Vanderbilt physicians that allowed her to receive what has been a life-changing treatment.

But not all cancer patients are as lucky. “Despite the really clearly improved outcomes, lots of women with BRCA-mutated ovarian cancer who are not treated at Vanderbilt are not being offered PARP inhibitor maintenance,” said Crispens — suggesting it’s vitally important to get the word out to other treatment centers.

Though she lives over five hours away, Thomas said Nashville has come to feel like a second home because of the incredible care she’s received at Vanderbilt-Ingram.

Every few weeks, Thomas brings pieces of her Georgia home with her up to Nashville; she’s been known to have up to six people come with her to appointments, each ready to rally around her in support and — before the COVID pandemic — go out on the town. “I mean, there could be worse places to get cancer treatment than Nashville,” said Thomas with a laugh — as always, finding the positive in every situation.