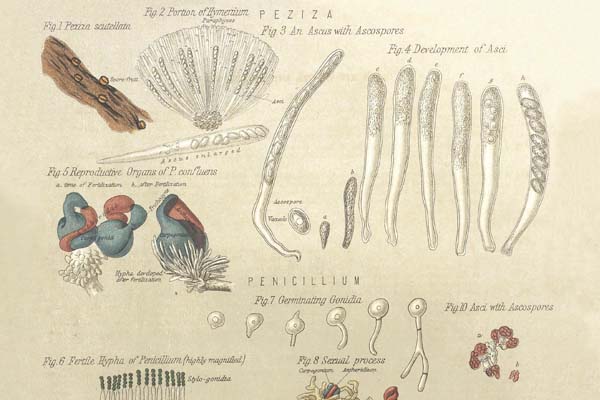 SPORE may have been just an acronym, not a nod to the biological definition, when the National Cancer Institute (NCI) launched its Specialized Programs of Research Excellence in 1992. But the SPOREs are living up to their catchy name. They are behaving like biological spores: casting their funding “seeds” far and wide to germinate entirely new research areas, build the careers of investigators and change oncology care.

Vanderbilt-Ingram Cancer Center is home to two SPOREs, in Gastrointestinal (GI) Cancer and Breast Cancer, which have been continuously funded since 2002 and 2003, respectively.

“Having SPOREs has allowed us to build the framework, the organizational capabilities, for strong research and clinical programs,” said Jennifer Pietenpol, PhD, Executive Vice President for Research at Vanderbilt University Medical Center, director of Vanderbilt-Ingram and co-principal investigator of the Breast SPORE.

“SPOREs define the cancer centers and medical centers that can bring all the assets to bear for a productive discovery pipeline for a disease,” added Pietenpol, the Benjamin F. Byrd Jr. Professor of Oncology and holder of the Brock Family Directorship in Career Development. “We have distinctive capabilities through our framework to make discoveries, translate them to interventions, and offer those innovative interventions to patients and communities.”

SPOREs are a key part of the NCI’s efforts to promote collaborative, interdisciplinary translational cancer research. Each SPORE focuses on a specific organ site or type of cancer and involves basic, clinical and population research scientists working together to move discoveries from the laboratory to people and to take observations made in the clinic and community back to the laboratory.

“It’s remarkable to have this long legacy of having homegrown basic science discoveries translate into clinical trials that potentially benefit patients. That’s the overarching mission of every SPORE,” said Ingrid Mayer, MD, MSCI, Ingram Professor of Cancer Research and co-principal investigator of the Breast SPORE.

In early 2019, Lori Carver got the news that the metastatic breast cancer she was being treated for had progressed.

Carver, one of Mayer’s patients, knew that she had been fortunate in her response to treatment. She was first diagnosed with estrogen receptor-positive breast cancer that had already spread to her bones in 2013. Chemotherapy and radiation followed by anti-estrogen endocrine therapy kept the cancer in check for some time. When it progressed, she was able to take a drug that had been recently approved, palbociclib (Ibrance). The cancer remained stable for two-and-a-half years, she said.

“After the Ibrance stopped working, I started a clinical trial, but after a couple of months, I still had progression,” Carver said.

new drug had just been approved in May 2019 though, and Carver qualified to take it. After three months on alpelisib, her disease is stable again.

Alpelisib is the first phosphoinositide 3-kinase (PI3K) inhibitor to be approved for the treatment of advanced or metastatic estrogen receptor-positive breast cancer, and it represents one of the success stories of the Vanderbilt-Ingram Breast SPORE.

It turns out that about half of estrogen receptor-positive breast cancers have mutations in PI3K signaling pathways, which promote cell proliferation and survival. Investigators at Vanderbilt-Ingram, including the Breast SPORE’s former co-leader, Carlos Arteaga, MD, demonstrated in cell and animal models that mutations in the PI3K pathway contribute to breast cancer’s resistance to anti-estrogen therapies and that blocking the PI3K pathway restores sensitivity to these therapies.

“The pre-clinical studies translated into three clinical trials that we did through the SPORE,” Mayer said. “And those led to a very large Phase III global trial that ultimately resulted in approval of the first PI3K inhibitor. Without our pre-clinical studies, initial trials and midpoint trials, the Phase III trial would have never been done.

“We played an important role in the approval of alpelisib for PIK3CA-mutated, estrogen receptor-positive breast cancers, and that was all SPORE-supported research.”

“There’s no cure for metastatic breast cancer; it can be managed as long as there’s something that’s working,” Carver said. “As a patient with stage 4 cancer, you just hope that science continues to move forward and find new drugs that help us extend our lives and have good quality of life.”

The Breast SPORE has also tackled triple-negative breast cancer, a type of breast cancer with a higher mortality rate overall, and especially in African American women.

“We’ve always aligned the SPORE projects to the needs of our catchment area and to the strengths of investigators here,” Mayer said. “Triple-negative breast cancer disproportionately kills African American women in our area.”

Pietenpol and colleagues discovered that triple-negative breast cancer includes multiple different molecular subtypes, which they reported in the Journal of Clinical Investigation. This discovery has had a global impact on clinical studies, Mayer said.

“It has shifted the way that we design clinical trials for patients with triple-negative breast cancer; we are designing much smarter trials than we did before when our treatments were ‘one size fits all,’” Mayer said.

In addition to making discoveries that are changing colorectal cancer care, the GI Cancer SPORE pioneered the inclusion of patients on the research team as advocates.

During Ron Obenauf’s final treatments for metastatic colorectal cancer in 2005, his oncologist, Jordan Berlin, MD, suggested that he become an advocate. Obenauf agreed and joined the GI SPORE. He has participated in monthly meetings at Vanderbilt, attended national cancer meetings, given presentations to promote research and colorectal cancer screening and, with his wife Ardeth, financially supported research at Vanderbilt-Ingram.

“I’ve been very thankful for the opportunity to serve as a member of the research team,” Obenauf said.

“Having a patient advocate on each project has been a distinguishing feature of our SPOREs, and one that other SPOREs around the country have now adopted,” said Robert Coffey, MD, Ingram Professor of Cancer Research and principal investigator of the GI SPORE.

“We put a face on cancer,” Obenauf said. “We give the patient’s perspective and create a sense of urgency about the need for new and improved treatments.”

The GI SPORE has longstanding efforts in drug discovery and in exploring how colorectal cancer becomes resistant to therapies that target the EGF receptor (EGFR), such as cetuximab and panitumumab, which are mainstays of treatment for advanced colorectal cancer.

Coffey and his team discovered a novel form of resistance: the production of small RNAs that increase Wnt signaling, which has roles in cell growth and proliferation. Their report in Nature Medicine showed that blocking Wnt signaling in cells and animals restored responsiveness to cetuximab.

Charles Manning, PhD, Ingram Professor of Cancer Research, and colleagues found that tumors that are resistant to EGFR-targeted therapies become dependent on glutamine, rather than glucose, as an energy source. The investigators are now testing two drugs that cut off glutamine as an energy source, in conjunction with novel glutamine-based PET imaging methods that are unique to Vanderbilt.

“Our goal is to use imaging to predict in advance who will benefit from the treatment and tie it to a gene signature that can be tested anywhere, without needing the specialized imaging,” said Berlin, Ingram Professor of Cancer Research, Vanderbilt-Ingram associate director for Clinical Research and co-director of the administrative core for the GI SPORE.

“One of the lasting legacies of our SPORE may be that in the near future, when a patient with colorectal cancer progresses on an EGFR-targeted therapy, we will be able to evaluate the mechanism of resistance, have a way to treat it and keep people alive longer.”

Some of those treatments may include new drugs developed at Vanderbilt.

“We have been very bold; we’re not afraid to go after tough targets,” Coffey said.

The targets have included the Wnt signaling pathway, difficult because of its complexity and the number of proteins involved, and the proteins RAS and MYC, considered “undruggable” because they lack “pockets” for binding small molecule pharmaceuticals.

A Wnt pathway inhibitor developed during a previous cycle of GI SPORE funding will soon begin clinical testing, and RAS inhibitors have been licensed to a pharmaceutical company for further development. The current program will work toward an inhibitor of MYC, which is thought to drive up to 70% of human cancers.

Coffey and his colleagues are also characterizing and exploring colorectal cancer stem cells, which may be a source of cancer recurrence. They have identified two molecular markers of colorectal stem cells, and with philanthropic support from the Obenaufs, they have generated mice with “glowing” green or red cells, depending on which marker they express.

“We can use a fluorescence colonoscope to look at tumors in the mice before and after treatment … and ask how much is red, how much is green, what are the stem cells that repopulate the tumor?” Coffey said.

Understanding the molecular details of these stem cells could lead to new therapies to keep cancer from coming back.

“There’s a large group of patients whose tumors are removed, treated, seem to be completely gone, and then recur,” Berlin said. “It’s likely due to reactivation of quiescent stem cells, and strategies to target these cells may prevent recurrence.”

In addition to focused research projects, SPOREs support core resources that provide valuable services to investigators within and beyond the SPORE.

Examples include cores for Administration and Engagement, Biostatistics and Bioinformatics, and Pathology and Tissue Informatics.

Listing of current SPORE projects and leaders at VICC.

The Breast SPORE has launched a new resource: an Immunophenotyping Core that will characterize the immune cells present in tumors and the tumor microenvironment, and how they respond to treatment as part of studies seeking to improve immunotherapy responses in breast and other cancers.

“When research dollars are difficult to obtain, it’s valuable to know that we have a way to fund a good idea,” Coffey said. “We’ve been very strategic in the way we’ve used pilot and career development funds.”

The projects often produce findings that garner independent grant funding or that become one of the research projects in the next iteration of the SPORE. Two of the projects in the current Breast SPORE evolved from career development awards in the previous funding cycle.

The collaborative culture at Vanderbilt has provided fertile ground for its long-running SPOREs. And the collaboration extends to other SPOREs and institutions around the country.

“The cross-pollination from our extensive collaborations has led to incredibly fruitful discoveries and faster advancement of science in general,” Mayer said.