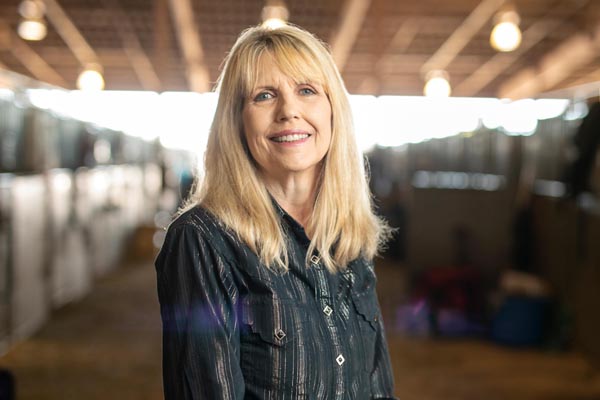 As a barrel racer, Bari Brooks is accustomed to dealing with a trio of obstacles.

The rodeo sport entails staying astride a horse as it careens around three 50-gallon drums arranged in a cloverleaf pattern.

After being diagnosed with breast cancer, she had to put the racing on hold and make it past three more challenging obstacles: surgery, radiation and chemotherapy. By participating in a clinical trial, she helped remove one of those obstacles for others with early-stage breast cancer. Many of them won’t have to undergo chemotherapy because of the landmark study for which Brooks volunteered at Vanderbilt-Ingram Cancer Center.

The TAILORx (Trial Assigning Individualized Options for Treatment (Rx)) study, reported at the 2018 American Society of Clinical Oncology meeting in Chicago and published in the June 3, 2018, New England Journal of Medicine, looked at the current standard of care for a subset of women with early stage breast cancer — care that almost always has included both chemotherapy and endocrine therapy — and after nine years of following these women, found that most of them (about 70 percent) actually don’t need chemotherapy.

The finding will impact approximately 30,000 women a year in the United States, said Vanderbilt-Ingram Cancer Center’s Ingrid Mayer, MD, MSCI, an author of the TAILORx study.

Chemotherapy has serious toxicity risks, so it’s ideal to avoid it if it’s not needed, Mayer said. Its well-known short-term side effects include nausea and hair loss, but it can also cause uncommon but devastating long-term heart and nerve damage and increase the risk of leukemia later in life.

“This is practice and paradigm changing, a big shift in the standard of care,” said Mayer, Ingram Professor of Cancer Research. “The issue is, nowadays when you treat cancer, you want to go back to the ‘Goldilocks and the Three Bears story,’” Mayer said. “You don’t want things too cold or hot; too soft or hard; too big or too small; you want things just right. You want to do what you need to do to have the best possible outcome on your cancer without incurring unnecessary and potentially damaging and permanent side effects. That’s the issue with chemotherapy.”

“It was unclear who we really needed to treat with chemotherapy,” Mayer said. “If we don’t believe everybody needs chemotherapy, could we tease out those who didn’t and use their genomic signature to do that?”

Prior to the study, which began in 2006, it was clear that women with a high risk of recurrence needed chemotherapy and those with a low risk did not. But the thought was many women with breast cancer were being overtreated.

The design of the TAILORx study worked like this: women with estrogen-positive tumors between 1 and 5 centimeters and no lymph node involvement were given a score on the Oncotype DX Breast Cancer Assay, a genetic test that gauges the activity of genes involved in recurrence and helps sort out women with very high or very low risk.

Of particular interest in the TAILORx study was the large number of women with an intermediate score. “These women in the middle were the big question mark,” Mayer said.

This intermediate score group included 6,711 women or 69 percent of the women enrolled in the study, which was sponsored by the National Cancer Institute (NCI), part of the National Institutes of Health (NIH), and coordinated by the Eastern Cooperative Oncology Group (now the ECOG-ACRIN Cancer Research Group). The study was carried out at 1,182 sites in the United States, Australia, Canada, Ireland, New Zealand and Peru, including Vanderbilt University Medical Center where 38 women were enrolled.

Then came the landmark news: the outcome for the two groups of women with intermediate scores (scores of 11-25) was the same — chemotherapy had no advantage. After nine years, 93.9 percent were alive in the endocrine treatment-only group, compared with 93.8 percent in the group that also received chemotherapy. In the group of women receiving endocrine therapy alone, 83.3 percent were free of breast cancer, compared to 84.3 percent in the group who got both treatments.

Ingrid Mayer, MD, MSCI, is one of the authors of the TAILORx study and recruited patients for the clinical trial. Photo by John Russell.

“The percentage of recurrences or new cancers was the same in both groups, regardless of whether they received chemotherapy or not, suggesting that hormone therapy is good enough,” Mayer said. “You don’t need to go the extra mile with chemotherapy. There’s no advantage. If you can avoid chemotherapy, that’s a great win. For most, chemo is damaging and annoying while you get it, but most of the side effects go away. But there are some side effects that become permanent and can be life-changing. In addition to heart and nerve damage and a heightened risk of leukemia, many women develop ‘chemo brain,’ where they lose some memory and cognition. For women with a job or lifestyle where they have to multitask and be sharp on their feet all day, chemo brain can be devastating. It can end someone’s career.

“Women can become quite crippled. Imagine a woman who plays the piano for a living, or for her own enjoyment, and suddenly she can’t play anymore. It’s not to be taken lightly. The chance of getting permanent side effects is small, but it’s not fun if you’re that one person who gets struck by lightning.”

Endocrine therapy also has side effects — menopause-type symptoms such as hot flashes, weight gain and pain in joints and muscles. Tamoxifen also causes a slight increase in risk for uterine cancer, but endocrine therapy is not considered as toxic and high risk as chemotherapy, Mayer said.

For patients older than 50 years in the intermediate score group, the TAILORx findings provide clarity. There is no benefit of chemotherapy. The answer is somewhat less clear for women 50 years or younger.

The study showed that women younger than 50 with a score above 21 were shown to have some benefit from receiving chemotherapy. “They don’t necessarily need to have chemotherapy, but a discussion about the pros and cons is advisable with this group,” Mayer said.

Brooks, 58, of White House, Tennessee, learned she had breast cancer from a routine mammogram in July 2009 when she was 49. Following a biopsy confirming the results of the mammogram, her Vanderbilt primary care physician Mohana Karlekar, MD, assistant professor of Medicine, sent her to “the two Ingrids,” oncologist Mayer and breast surgeon Ingrid Meszoely, MD, associate professor of Surgery and Ingram Associate Professor of Cancer Research.

After getting a second opinion at another Nashville hospital, Brooks returned to Vanderbilt and recalls being “blown away” during her first appointment with Mayer, Meszoely and radiation oncologist Anuradha “Bapsi” Chakravarthy, MD.

“They met with me and my husband. They had a white board. They explained what their jobs were and what had to be done,” Brooks said. “Their approach was great, giving us all the information at once. We didn’t have to go from clinic to clinic.”

She ended up in the endocrine therapy plus chemotherapy group and, because she preferred having chemotherapy, she didn’t have to make the choice about whether to remain in the study, she said.

“I get emotional today talking about the study,” Brooks said in her office at Vanderbilt University, where she works in human resources supporting several areas including the Schools of Medicine and Nursing. “I see the great work that we do here at Vanderbilt and I feel privileged to have participated in this study to help determine which women with breast cancer need chemotherapy. I did it to make things easier on the women coming behind me. Because of this study, thousands of women a year won’t need chemotherapy. Sure, I was focused on my survival, but this was something I could do to help both myself and others.”

Brooks and Barry, her husband of 33 years, have a 30-year-old son. She has been a barrel (horse) racer since she was a child, and after a few years off after surgery, radiation and chemotherapy, she’s back riding her beloved horses.

“My diagnosis made me realize I’m mortal. I knew my cancer was 90 percent treatable and my chances of survival were high, but I still thought I could die,” she said. “You start thinking about what your life has meant.  A lot of good things came out of my breast cancer, not just the study. You get your priorities straight and you realize that it doesn’t matter where you are in your career or if you’re successful. All of a sudden that doesn’t matter. It confirmed the people I thought really loved me, really did. I realized it was about how I have lived my life and what I want to be remembered for.”

Mayer said she is grateful to Brooks and the other women who chose to enroll in the study. A few — about 12 percent — left because they weren’t randomized to the group they had hoped. “Human beings are awesome and want to help other human beings, and some women go into this thinking they’re going to be OK with whichever group they’re assigned to, but when push comes to shove they’re not OK, and that was to be expected. They had the option, if they were randomized into the group without chemo, to say ‘no,’” Mayer said.

The TAILORx study provides clarity both for the many women facing breast cancer and for their physicians who have struggled with recommending chemotherapy for the majority of their patients with breast cancer.

“Before (the study) it was very much an educated toss of the coin; a decision that relied in part on a physician’s preference,” Mayer said. “Now it’s much more black and white. You have a test. If you have an intermediate score, there’s no guessing. It has made the discussion a heck of a lot simpler. We now have very concrete data. Part of our job is to de-escalate the fear as much as possible and reassure women they won’t be making a wrong decision by foregoing chemotherapy if chemotherapy is not indicated.”