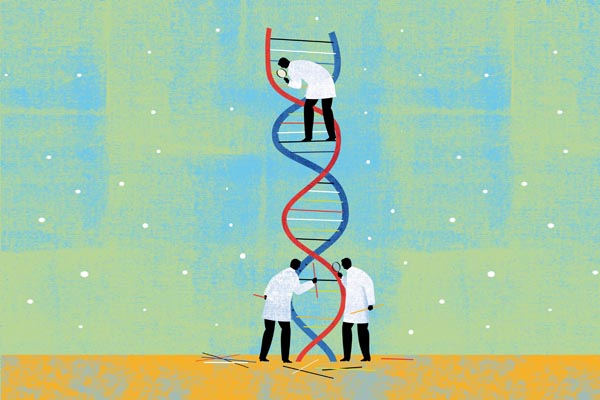 That’s the number of spots in a cell’s DNA that might be damaged every single day. Our DNA is under constant attack by the chemical products of normal cellular metabolism, ultraviolet radiation from the sun, chemicals in the environment, X-rays and other insults.

That’s also the number of spots in our genome that could become a cancer-causing mutation every single day — if the teams of proteins that recognize and repair DNA lesions, or signal for the cell to self-destruct, fail.

“It’s been known for a long time that DNA repair is critical to prevent cancer — that the loss of or inefficiencies in DNA repair cause mutations and changes in our chromosomes that lead to cancer development,” said David Cortez, PhD,

Ingram Professor of Cancer Research and professor of Biochemistry at Vanderbilt University.

Even cancer cells need to have some functional DNA repair pathways though, since too much DNA damage kills cells. Inflicting DNA damage with chemotherapies or radiation is a strategy for treating cancer.

“When they work, chemotherapy and radiation are overwhelming the DNA repair systems that are already compromised in the cancer cell, and the cancer cells die,” Cortez said. “The problems, of course, are that these treatments are toxic to normal dividing cells, and they don’t always work.”

Recent advances have led to selective targeting of DNA repair pathways to kill cancer cells without the toxic side effects of chemotherapy and radiation.

Patients with mutations in the “breast cancer susceptibility” proteins BRCA1 or BRCA2 are among the first to be treated with this new DNA repair-targeted approach.

BRCA1 and BRCA2 were discovered in the search for genes associated with inherited breast cancer. A woman who inherits a harmful mutation in either of these genes is about five times more likely to develop breast cancer than a woman who does not have the mutation, and the risk of ovarian cancer is about 10 to 30 times higher than normal. BRCA mutations also increase the risk of developing colon, pancreatic and other cancers.

At the time of their discovery, it was unclear how mutations in BRCA1 and BRCA2 contribute to breast cancer development.

BRCA1 and BRCA2 are DNA repair proteins. They repair double-strand breaks (breaks that cut both “sides” of the DNA ladder), and they coordinate the proteins that come together to respond to this type of DNA damage. 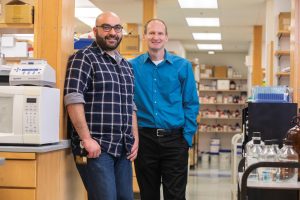 “These drugs are again overwhelming the cancer cells with DNA damage, but not by directly causing that damage,” Cortez said. “Instead, they’re blocking a repair pathway that the cancer cells have become addicted to. We call this ‘synthetic lethality.’

“This is the direction we’re going in the DNA repair and cancer field — taking the vulnerability caused by a DNA repair defect into account for selective therapeutic targeting of the cancer cells.”

Cortez has been focused on DNA repair pathway discovery since joining the Vanderbilt faculty in 2002. He and his team have a particular interest in the repair mechanisms that work in dividing cells.

Although damage that doesn’t get fixed in a non-dividing cell may cause problems or lead to cell death, it’s the unrepaired damage during cell division that creates genetic mutations and chromosomal changes that is most relevant for cancer, Cortez explained.

“Replication-coupled DNA repair is where we are discovering cancer vulnerabilities.”

Using a protein-based strategy they devised, Cortez and his team generated a complete “parts list” for the DNA “copy machine.”

The fix-it proteins “are the proteins that are added on to the copier to give it higher fidelity — to make it faster and more accurate and to fix any paper jams when there’s a problem.”

Some of the Cortez team’s studies have revealed mechanistic details for how known proteins fit into the repair and copy machinery. Others have discovered roles played by newly characterized proteins in existing repair pathways.

The team’s latest discovery, though, makes Cortez shake his head in disbelief.

“DNA repair is a very mature field,” Cortez said. “The Nobel Prize was given a few years ago to three scientists who studied DNA repair in the 1970s and ‘80s. The idea of finding a whole new repair mechanism … nobody would have thought this is possible.”

The new mechanism, which is initiated by a protein called HMCES (pronounced hem-seize), was reported in the Jan. 10 issue of the journal Cell.

HMCES was one of the proteins on the DNA copy machine parts list. It had no known function related to DNA replication or repair. Cortez and Mohni were

curious about HMCES because of its high conservation among species.

“There is a HMCES-like protein in every organism on the planet — in humans, flies, frogs, bacteria, the things that live in the thermal vents in the ocean … it’s there,” Cortez said. “That told us that it’s got to be doing something really important because it’s been around for billions of years of evolution, but no one had ever studied it in the context of DNA replication.”

The researchers deleted the HMCES gene in cells to look for problems with replication, but they didn’t find any. Cells missing HMCES were able to duplicate DNA and divide. When the researchers challenged these cells with agents that damage DNA, however, they discovered that HMCES was required to keep the cells healthy. But they were stumped by the findings. The DNA-damaging agents they used are known to cause specific types of damage that are repaired through various unrelated DNA repair pathways, Cortez said.

“Carmelo said, ‘The one kind of lesion that’s common amongst those types of DNA-damaging agents is an abasic site,’” Cortez said. “That insight was key.”

Abasic sites result when the base — the A, T, G or C — is lost without causing a break in the DNA. They are the most common type of DNA damage and happen as many as 20,000 times per day in human cells, Cortez said.

When abasic sites occur in double-stranded DNA, they are rapidly repaired by a pathway called base excision repair. But there was no known mechanism to repair abasic sites that occur in single-stranded DNA. The new findings demonstrate that HMCES fills this role. It binds to the abasic site and protects it from being incorrectly

repaired by a “bypass” polymerase that puts in a random base to keep replication going, with the potential of causing mutations.

Cells missing the HMCES protein accumulate DNA damage, are hypersensitive to DNA-damaging agents that cause abasic sites and have increased genetic instability.

A defect in the HMCES repair pathway may or may not contribute to cancer.

“We may never target HMCES,” Cortez said. “But discovering these potential vulnerabilities helps us even if we never target this particular DNA pathway. The more we learn about DNA repair, the more genes we discover, the more we can screen patients and ask: do they have defects in these genes?”

At National Cancer Institute-designated Comprehensive Cancer Centers like Vanderbilt-Ingram Cancer Center, patients with cancer can be screened for the most common DNA repair pathway defects. And it’s becoming increasingly possible to sequence DNA from tumors to fully characterize the mutations that exist.

For example, olaparib and other PARP inhibitors that are currently used for BRCA-deficient tumors might be effective for tumors with defects in the same repair pathway.

“There are not just two genes in that double-strand break repair pathway; there are probably 25 or more,” Cortez said. “So, if a clinician finds out a patient’s tumor has a mutation in one of the other 23 genes, the question is: should they use olaparib? We don’t know yet, but the feeling is that it should work because it’s the same pathway.”

Patients with defects in a different DNA repair pathway (mismatch repair) appear to be more sensitive to immunotherapies. The tumors generate new proteins that are recognized by the immune system, so strategies that unleash the immune response are successful in killing mismatch repair-defective cancers, Cortez said.

DNA repair-targeted medications might even be useful as cancer-prevention treatments one day. Scientists are currently debating whether to test olaparib as a cancer prevention agent for people with BRCA1 or BRCA2 mutations.

“Wouldn’t that be great … if we knew you had an inherited mutation in repair pathway X, and we had a drug you could take to lower your cancer risk back down to a normal risk level?” Cortez said. “I think it is possible. In fact, 25 years from now, I bet that’s happening. Maybe even sooner.”