Ron Duncan kept Googling his cancer diagnosis and coming up with the same answer: death.

Having just gotten the news from his primary care provider, he wanted to know what his options were with peritoneal carcinomatosis, a cancer that had originated in his appendix then spread throughout his abdominal cavity. His only inkling that something might have been amiss was pain in his lower abdomen, pain he figured was a hernia from strenuous athletic activity. He was 53 and in the prime of his life, a successful business executive who played multiple sports.

That was six years ago.

These days, Duncan is back playing softball doubleheaders. A highly specialized cancer treatment that entails combining surgery with chemotherapy saved his life. The Brentwood, Tennessee, man underwent hyperthermic intraperitoneal chemoperfusion (HIPEC) surgery on April 10, 2013, and had portions or complete removal of all of six diseased organs before having his abdominal cavity irrigated with heated chemotherapy.

Duncan had his appendix, spleen, gallbladder and omentum taken out along with portions of his small intestine and large intestine. He also had tumors excised from his liver. The heated chemotherapy destroyed any remaining microscopic cancer cells.

Duncan sent a message on the sixth anniversary of his “cancer-cleaning, awesome surgery” to thank Kamran Idrees, MD, MSCI, MMHC, director of Pancreas and GI Surgical Oncology and director of the Peritoneal Surface Malignancy Program at Vanderbilt-Ingram

Cancer Center (VICC). Idrees, who started the HIPEC program at VICC, is a highly skilled surgeon who had completed two fellowships, including one at University of Pittsburgh Medical Center, one of the premier HIPEC procedures training programs, under the tutelage of David Bartlett, MD.

“I wanted to do this to help people when they are at the brink of no hope,” Idrees said.

He worked with Bartlett from July 2009 to June 2011. After completing his fellowship, Idrees came to VICC in August 2012 to establish the HIPEC program. He and a colleague, Christina Bailey, MD, MSCI, who joined the program in 2015, have performed more than 100 HIPEC surgeries at Vanderbilt. It’s a surgical procedure that isn’t widely available. 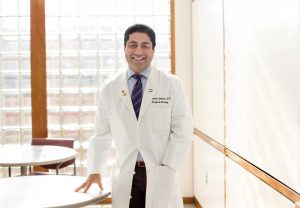 Kamran Idrees, MD, MSCI, MMHC, came to VICC in 2012 to establish the HIPEC program to offer hope to patients with abdominal cancer.

“Building a successful program, such as the one at our institution, could not have been possible without a true team effort and leadership support from the department of Surgery and VICC,” Idrees said.

Although approximately 60,000 patients a year are diagnosed with peritoneal metastasis in the United States, fewer than 1,000 HIPEC procedures were performed in 2015, according to a study published this year in JAMA Network Open. The study cited the limited number of HIPEC surgeons, lack of knowledge about the procedure and misperceptions about poor outcomes as factors for the low number of surgeries. The researchers in that study did a comparative analysis of HIPEC with more commonly administered surgeries for liver, pancreatic and esophageal cancers. They reviewed 34,114 cases and determined that HIPEC actually “had the lowest mortality risk, almost 50% to 75% lower than the other advanced oncology surgical procedures.”

Those statistics weren’t available when Duncan made his decision to go forward with the surgery. He found out about the surgery after demanding a treatment option. His oncologist told him about Idrees, describing him as a “radical new surgeon” who had been at Vanderbilt for only a few months, but warned Duncan that he would have to be deemed suitable for HIPEC surgery.

Five days later, he and his wife, Jill Duncan, met with Idrees.

“I loved him from the day he first walked into the room,” Duncan said of Idrees. “He was very stern. He shook my hand and greeted us. He pulled up the chart. Then he looked at me and smiled right at me. He said, ‘I believe you are a candidate.’ I said, ‘OK, what do I have to do?’”

Duncan was sent for a physical.

“They stripped me down and threw me some shorts and tennis shoes and ran me like a dog at the age of 53,” he said.

The test was strenuous, but Duncan had always been athletic, surfing the waves off Point Loma, California, while in college and playing basketball, softball, golf and baseball. Over the years, he had stayed in shape. He made it through the physical and reported back to Idrees’s office.

“You are a racehorse,” the doctor told him. “You are now a candidate for surgery.”

The surgery would be particularly challenging because the cancer had spread to so many organs. Idrees advised the Duncans that if he came out of the operating room in less than two hours it would be because the tumors were too entrenched. A successful surgery would take several hours longer.

The procedure requires a team that works like a well-oiled machine because there are so many moving parts, Idrees said. The team consists of nurses, anesthesiologists, pharmacists, perfusionists, oncologists and other specially trained clinicians. After the removal of the tumors, heated chemotherapy would be circulated through the abdominal cavity for 60 to 90 minutes then washed out.

Duncan reported for surgery at 5:30 a.m. on a Wednesday.

“In the middle of my epidural, I found out that the guy prepping me  for surgery had gone to Point Loma High School when I played baseball at Point Loma Nazarene University,” Duncan said. “We had surfed at the same beach near the same cliffs almost every single day for five years. We had probably surfed the same waves during the 1980s.”

He remembers laughing as he was wheeled down the hall toward the operating room and his anesthesiologist talking with him about his positive attitude, but when his gurney arrived at operating room number 24, he stopped laughing.

“That was the first time anybody had seen any tears coming out of the corner of my eyes,” Duncan said. “The anesthesiologist looked down at me and was trying to encourage me.”

The smile returned to Duncan’s face, and he told her that 24 was his number. A lifelong San Francisco Giants fan, he had met Willie Mays as a child. That was the baseball legend’s number, and he had made it his number too through high school, college and afterward. Every sports jersey he ever had was No. 24.

Then he was wheeled into the room, given anesthesia and told to count backward as he drifted off. Years later, Duncan would learn that 24 was the student number Idrees had been assigned in medical school.

Recovery from the surgery took half a year.

“I ended up on a first-name basis with some of the people at the Vanderbilt emergency room because there were a lot of things my body was going through,” he said. “I still look back on all that and think that’s nothing to pay for an amazingly healthy and blessed life.” 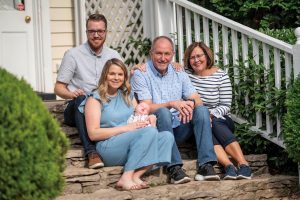 In 2018 Duncan founded The RAD Project to raise funds for cancer research, including peritoneal carcinomatosis, and to support families dealing with cancer.

“My wife, Jill, is unbelievable,” he said. “I know what a spouse and other family members go through, trying to sleep on a lounge chair for 14 nights straight or longer. I was the one on drugs without any pain. She was the one having to deal with all the stuff.”

The logo for The RAD Project includes the number 24. A good friend, Billy Montana, a Nashville singer and songwriter who has written multiple songs that have topped the charts, helped him organize two fundraisers at The Bluebird Café.

Duncan’s initials spell out RAD. It’s also a phrase he often used in his surfing days. Living in Nashville, he can’t surf anymore, but he plays on a softball team with his two sons.

“I have the most blessed and wonderful life,” he said. “I’ve been married to Jill for 38 years. My sons are just exquisite young men.”

Although he considers himself blessed, he said he’s asking for something more.

“This is my hope: that when someone Googles peritoneal carcinomatosis, the first thing that pops up doesn’t tell them there is no hope, it’s terminal and they’re going to die,” he said. “I don’t want anyone else to read that. That’s my prayer and my purpose.”