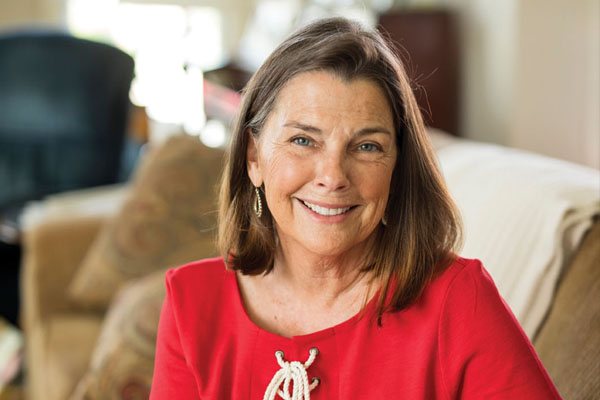 Anne Wolfe asked the doctor to spell it out.

She had come to see Kamran Idrees, M.D., a surgical oncologist at Vanderbilt-Ingram Cancer Center (VICC) knowing that she had a malignancy in her liver, but she didn’t know the type of cancer that had secretly invaded the organ.

“He looked at me and said ‘you have cholangiocarcinoma’ and I said ‘spell that for me, please,’” Wolfe said.

Idrees not only spelled it, but also wrote it out. He then carefully explained, step-by-step, what lay ahead. She learned she had a rare cancer that had started in the bile duct of her liver.

The teaching moment was one that was familiar to Wolfe, who had retired from a 33-year career in education. A Kentucky kindergarten teacher, she was accustomed to spending time exploring the unknown with beginner learners. Now she was the novice and eager to discover answers.

She had come to Vanderbilt University Medical Center seeking information on Oct. 30, 2015, about two weeks after having her gallbladder removed at another hospital. A biopsy had revealed the malignancy.

It started with “a stitch.”

Wolfe’s first symptoms began in February 2015. What felt like a pulled muscle in her side when she went to bed at night slowly evolved into stomach issues and pain when she ate. Cholangiocarcinoma is often considered a silent disease because its symptoms can be vague and similar to other conditions.

“It felt like a small stitch in my side,” she said. “It wasn’t something I thought much about. Over the summer I started having stomach issues. Everyone thought it was my gallbladder, but none of the tests pointed to that.”

An ultrasound detected something doctors believed to be a hemangioma, a non-cancerous growth found on the skin and organs. It forms due to abnormal collection of blood vessels. Surgery to remove her gallbladder was suggested, but Wolfe put off the surgery.

It wasn’t until the pain became unbearable months later that she scheduled the gallbladder surgery. The hospital sent a biopsy of the mass to Vanderbilt.

A lot had happened since Wolfe’s first ultrasound revealed the mass. As she looks back, she said all the events leading up to her meeting Idrees were for a reason.

Everything fell into place.

For most of her life, Wolfe lived in Breckinridge County about 65 miles southwest of Louisville, Kentucky. She and her husband worked in the school system and raised their son there.

It was a quirk of fate—actually an impulse decision—that would bring her closer to Nashville and VICC, where she could receive the highly specialized care required for her rare cancer.

“It’s odd,” said Wolfe. “One day we went out to the country to buy watermelons and we came back with a house. It’s crazy, but I know that if we had not moved to Bowling Green when we did, we would have never gone to Vanderbilt.

“Based on where we used to live, we would have looked at going to Louisville for care. I believe everything was put in place, in our path, for a reason.”

On Oct. 2, 2015—11 days before learning about the cancer—the Wolfes closed on their new home in Bowling Green, Kentucky. Their new location put them within an hour’s drive from VICC, one of the top centers in the nation for a surgical procedure she would undergo.

Whenever there is a tumor in the liver, one of the first questions the experts ask themselves is whether it’s primary, originating within the liver, or a secondary tumor, meaning the cancer has spread or metastasized to the liver. In Wolfe’s case, once it was discovered that the tumor was indeed a primary cancer, the next step was determining if the origin was within the liver cells or the bile ducts.

Cholangiocarcinoma is a bile duct cancer. Considered rare, with 8,000 people in the U.S. diagnosed annually, signs and symptoms of the disease typically go unnoticed until it reaches advanced stages. Surgery is potentially curative if the tumor can be removed completely and if the disease has not spread.

According to Idrees, surgical treatment is not always cut and dried. Wolfe’s cancer involved most of her liver so he had to figure out a way to remove the entire tumor while leaving enough liver behind so that she will not go into liver failure. He and a team of VICC colleagues came up with a plan for blocking blood flow and nutrients from getting to the diseased portion of her liver, which set the stage for the smaller healthy portion to regenerate.

“When she originally presented, the tumor was involving the right side of the liver,” said Idrees. “It comprised nearly 70 percent of the organ. The fascinating thing about the liver is—it is the only solid organ that is able to regenerate.

“But if I had resected the organ at the time she presented, we were looking at taking nearly 80 percent of her liver to ensure that we remove all of the tumor.”

Idrees said it is feasible to live off of 20 percent of the liver, as long as that portion of the organ is completely normal. The issue arises with the functionality of the remaining portion of the liver. If it does not kick in, the patient is at risk for liver failure.

“From a cancer surgery perspective, our goal is to completely remove the tumor, but we were concerned with the survival of the remnant side,” said Idrees. “The portion that would be left had no disease involvement.

“It was imperative that we not only remove the entire tumor with margins, but that we gave the keeper (remaining) side of the liver a chance to regenerate,” said Idrees. “We didn’t want to cut too much and then wait and see if the remaining portion of the liver would kick in.”

To help figure out the quandary, Idrees asked for help from Daniel B. Brown, M.D., director of Interventional Oncology at VICC.

Unable to see the diseased organ for themselves, Brown’s team created a 3-D model of Wolfe’s liver using the most advanced software to calculate the total liver volume that would remain post surgery.

It allowed the team to “see” what they were dealing with. It also introduced another procedural option that allowed Idrees to move forward with surgical resection—radioembolization with Yttrium-90 (90Y).

Radioembolization is a minimally invasive procedure that combines radiation therapy and the ability to occlude blood vessels to prevent blood flow and growth of the cancer cells in the liver.

“Basically, we shrank the tumor on the right side while the left side (healthy portion) increased in size,” said Brown. “Our efforts were an example of a unique collaboration between surgical and interventional oncology at Vanderbilt with the No. 1 patient benefit.”

Vanderbilt is among the top 10 percent of 90Y centers in the country, said Brown, who directs a 90Y registry at Vanderbilt.

“The most common application for 90Y is to palliate patients who cannot be resected,” said Brown. “This patient was an unusual indication. She needed the liver to shrink. If she progressed much further while waiting for the future remnant to grow, there was concern that she would not be resectable. We needed to do what we could to reduce the size of the tumor.”

The technology, said Idrees, not available a decade ago, is now used to medicine’s benefit to make tumors resectable. He also noted that if a cholangiocarcinoma patient is not a candidate for resection or for liver transplantation, chemotherapy alone is not curative, but it is able to extend life by weeks or months.

“I could not have been in a better place than Vanderbilt,” Wolfe said. “I think when you find a place you want your treatment and you feel good about where you are, it makes a big difference. From the first day I met Dr. Idrees, I knew I was in the right place.”

Wolfe’s surgery at VICC was set for Feb. 8, 2016. But before the surgical team could begin their work, one more test needed to be performed—a laparoscopy to determine that the left portion of the liver was disease free.

She went into the operating room not having any idea what the outcome would be.

“I don’t know who answered me, but I do know what she said—Yes. The answer was yes!”

Wolfe’s cancer journey is not over. Although in remission, she returns for scheduled CT scans every six months. She said she’s grateful that her most recent CT scan on March 1, 2017, was clear.

“The outlook for this cancer is very bleak,” said Wolfe. “But I feel very good. I have been able to do everything I wanted to do. I am very, very grateful.”

Wolfe, who enjoys traveling, is busy with one of her favorite pastimes—scrapbooking. Just back from a two-week cruise, she is designing the pages of her next project.

“I know it (the cancer) can come back,” said Wolfe. “Having my gallbladder removed actually saved my life. I would have gone several more months until I was in too much pain, and it could have gotten out of hand and there may have been nothing they could have done.

“I feel like I have been given some extra time and I need to make good use of it.”