VICC Momentum >&nbspEasy on the Eyes

Easy on the Eyes

Jude Kee’s amber eyes are framed with brown glasses—the better to see his favorite “Mickey Mouse Clubhouse” show, which he requests over and over again, or to read his favorite books, like “The Little Engine That Could” and “Llama Llama Hoppity-Hop.”

Since he was diagnosed with a rare form of eye cancer in 2014, Jude has been undergoing a novel treatment to keep both eyes intact so he can keep doing what any 2-year-old loves to do—reading books, blowing bubbles and playing outside in his child-sized car.Every year approximately 300 families in the United States must digest the news that their child has a rare form of ocular cancer called retinoblastoma. Affecting children 5 years old and younger, the majority of patients are diagnosed before they reach the age of 2.Paramount for doctors and families—saving lives. But a very close second—saving the eyes and vision.

Nearly 25 years ago, the traditional treatment involved either surgically removing the eye or radiation therapy that led to facial deformities as well as an increased risk of developing other cancers. Systemic chemotherapy was later introduced as an option in some cases, but carried with it adverse side effects and did not always successfully kill more advanced tumors.

“It was that desire to save the eyes with usable vision that has prompted many of us in the field to think about new ways to offer therapy,” she said. “Retinoblastoma has probably evolved more than any other disease in terms of treatment advancements over the last two decades.”

Doctors at Vanderbilt recently began utilizing an emerging therapeutic approach called intra-arterial chemotherapy or IAC in the treatment of retinoblastoma. It is the only center in the region and one of a few centers in the country offering the novel therapy.

The procedure delivers a high concentration of chemotherapy directly to the tumor via the ophthalmic artery using a catheter that is inserted into the groin and threaded to the eye under X-ray guidance. Patients are typically kept overnight for observation.

Jude is Vanderbilt’s first patient to undergo IAC treatment. After seven treatments, his tumors are shrinking—great indicators of the therapy’s success. 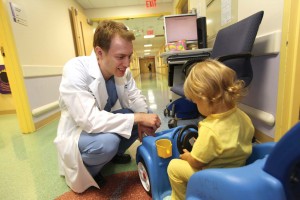 When Jude was first diagnosed in 2014 with tumors in both eyes, his parents were familiar with the newest therapy via a family friend dealing with the same diagnosis. Amy Kee, Jude’s mother, was aware that Anthony Daniels, M.D., M.S.c., assistant professor of Ophthalmology and Visual Sciences, Cancer Biology and Radiation Oncology, and director of Ocular Oncology at the Vanderbilt Eye Institute, came to Vanderbilt to lead the IAC program.

“We are so fortunate to have this treatment available at Vanderbilt,” said Kee. “We were given the option to follow the traditional treatment route. They would have removed his left eye immediately. We chose to try to save the eye and see where it took us.”

When describing the journey, Kee said they are “cautiously hopeful.”

“As long as we are seeing progress, we will move forward,” said Kee. “We will come out on the other side of this. He is able to go to school and have a normal life. We have not had to worry about his immune system being compromised and other issues typically associated with systemic chemo.

“Today he is thriving. He is more talkative. He is interested in books. He is more social. Sure, these could be developmental milestones, but we know from other parents with children with retinoblastoma that once they begin losing their vision they shut down and do the opposite of Jude.

“We know from testing that his retina is functioning better, and each time the readings improve,” said Kee. “That’s worth so, so much.”

Daniels, along with neurointerventionalist Michael Froehler, M.D., Ph.D., offers the full spectrum of treatments for retinoblastoma. The pair works closely with the oncology team under Friedman’s direction to ensure the best possible outcomes.

“It’s transformative,” said Daniels. “We are able to tailor treatments to each individual patient and each tumor. It is our expectation that IAC will become the primary modality of treatment for retinoblastoma at Vanderbilt.

“IAC also has the ability to prevent new retinoblastoma tumors from forming elsewhere in the eye. The patient never gets another new tumor in the eye because any early cancer cells that are present are killed before they can grow.”

Performed in the neuro-angiography suite at Monroe Carell Jr. Children’s Hospital at Vanderbilt, Froehler applies techniques similar to those used to treat brain aneurysms. He inserts a tiny catheter into the patient’s groin and threads it to the arterial branch leading to the eye to inject the chemotherapy cocktail prescribed by Daniels. Other techniques, including the use of a balloon to direct the flow of chemotherapy, are also used, depending on the individual patient’s anatomy.

In the Spring of 2013, Ronald Duncan went to the doctor seeking help for what he thought was an abdominal hernia. Not long afterward he received the devastating news that he had Stage IV appendiceal cancer.

Daniels is reporting success in the first application of intravitreal chemotherapy at Vanderbilt, which is being used to treat a child whose cancer returned after traditional chemotherapy. After three intravitreal treatments in combination with IAC, most of the vitreous seeds in that patient’s eye “have completely melted away,” according to Daniels.

“During this entire process, we were very mindful of Jude’s vision when choosing therapies,” said Kee. “It wasn’t just about getting rid of the tumors. We wanted to save as much vision as possible. We feel that we made the right decision and are giving our son the best chance.

“If it doesn’t work, we know that we tried and did everything we knew possible to save his eyesight.”