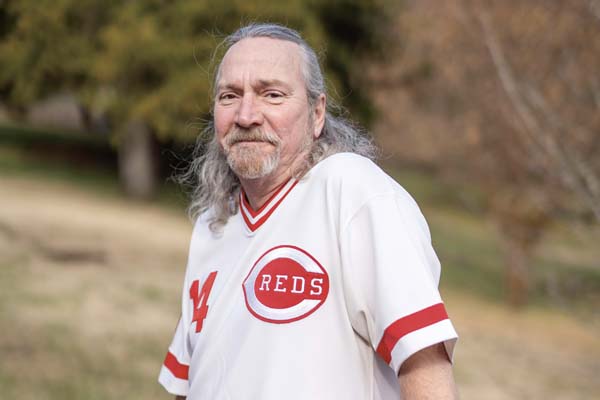 Blessings come in all shapes and sizes. Lately, I have been seeing them all around me. I guess I first started really noticing them when one of my best friends died from respiratory issues. His friendship was such a blessing, and because of that, I decided to quit smoking after 43 years. I got what I thought was a cold. Then I thought it was the flu. I got so sick I couldn’t go to my friend’s funeral.

Finally, I went to see the doctor, who after some tests and chest X-rays determined I had pneumonia. He gave me steroids and antibiotics to help me get better. It became a lot easier to not smoke when I couldn’t breathe. It seemed as though my friend was going to help  me quit smoking from up above. That was a blessing.

The next day, I got a call from the doctor who said he wanted to take another look at my lungs after I got over the pneumonia. That doctor was a blessing to have been so proactive. I got a call from scheduling to set up a return visit, but the call was from Vanderbilt-Ingram Cancer Center. I wasn’t expecting that. That was frightening.

As I checked in, I was scared and overwhelmed as I looked at all the obviously very ill people that filled the giant waiting room. A lovely lady named Linda Greer called me over to check me in. She could tell that I was rattled, and she put my mind at ease. She told me that I was where I was supposed to be, at the right time and in the best facility with the best people to help me. She was a blessing.

After that, there were X-rays, CT scans, PET scans, bronchoscopies, biopsies and all manner of tests until it was finally time to meet with the nurse practitioner to interpret all the results. Linda joked that she was a superstar and that she was the best. She was. She clearly and compassionately explained to me that I had lung cancer: non-small cell adenocarcinoma. We looked at the tumor on the screen. Yep, there it was. She explained it appeared to be only one spot in a good location for surgery on the right lung, which is larger, and that it was a type of cancer that is more treatable. More blessings.

After a few more tests, it was time to meet the surgeon, Dr. Eric Grogan. He reminded me of just how blessed I am. Finding this cancer so early, basically by accident, was a huge blessing. With this type of cancer, by the time I would have exhibited symptoms, I would have been in big trouble.

Then it was time to schedule surgery. My wife, Annette, and I had already booked our Aruba trip, and I knew how much it meant to her. I didn’t want to ruin that. The doctor said to go and relax. I told him I was going to go and exercise, eat well, relax and get ready for battle. He seemed to like that. We learned later that he is one of the top surgeons in the field. He is also a pretty good guy. Blessings.

So off to Aruba we went. Paradise. Good friends. Great food. Peace. I decided that every morning I would get up and walk to the beach, and that each afternoon in the heat of the day I would hit the fitness center.

The  first morning I went to see Victor who takes care of the exotic birds on the beach. I said hi to the birds, named Pepe, Guapo, Alba, Frederica, Rita, Laura, One, Two and Aruba. Finally, I stopped to see Sam, the toucan. Victor came over to me as I was talking to Sam and told me Sam had a tumor. I teared up and told Victor I did too. He told me not to worry and that everything would be OK. Even though I wasn’t quite sure I believed it, I agreed with him that everything would be OK and headed down the beach. The next day, I stopped in to see the birds and was talking to Sam when Victor came over. He said Sam’s tumor had disappeared. I looked . . . it was gone. I teared up again. I hoped that this was a sign.

I worked out every day and ate well and walked the beach. I figured my job was to get as strong as I could physically and get my mind ready for a fight. If you ask me, if you want to talk to God, you go to the beach or you go to the woods. As I walked the beach, I had some great conversations and found a lot of peace. Finally, the last day came, and we hugged our friends goodbye. It is always hard to leave the island, but this time was especially tough for me.

After a few days back at home and more tests, more blessings showed themselves. The nurse practitioner who did my final checklist for surgery turned out to be my friend’s best friend. My friend’s mother had lived across the street from me and had rescued me when I was down on my front porch with a pinched nerve. She had passed away recently from cancer, and I was honored to have been her pallbearer. I had met this nurse practitioner at the funeral.

One day as I sat in radiology at the Cancer Center, I realized that my daughter’s godmother, Dawn Sears, who had died of lung cancer within a year of diagnosis, had most likely sat in the chair where I was sitting. There were only three chairs. Before her death, she did a concert with other artists and raised over $1 million for research at Vanderbilt-Ingram Cancer Center . . . and now I was in the same space. We always try to give back with concerts like that. Nashville is beautiful that way.

I had a six-and-a-half-hour surgery on Aug. 17, 2018, and I spent four days in the hospital followed by months of healing at home. I am missing half a lung, but so far have been pronounced cancer free. No chemotherapy or  radiation needed. In another six months, we’ll look again and then each year after. In the last few months, I have lost three friends. I am not sure why I get a second chance.

As the bills start to come in, I realize how lucky I am to have great insurance through my wife’s employment and even luckier to have her by my side through this. So many signs along this journey have given me hope and confidence that things are going to be all right. So many people are pulling for me and praying for me.

I’m not going to fool myself. Things can go wrong. This is complicated stuff, and bad news can be just around the corner, but I don’t think you could get better news that includes the words “lung cancer” than I’ve been given. I have been blessed my whole life and continue to be. If I do start to feel sorry for myself, I think of all the people that I have met along this journey that have it so much worse. I think of all the skilled and compassionate people on my team. I think of all the people who love me and wish me the best.

A friend from high school who has been fighting cancer for 17 years congratulated me for winning the lottery of life. I can’t say I don’t have a little guilt. I must either have something more to learn or something more to give. It can’t just be random luck, can it?

Maybe the biggest blessing of all is to finally realize that time can be short. I always thought I was bulletproof. I know now I am not. Each day’s value has increased. I’m not going to put things off that really matter, and I’m going to worry a whole lot less about things that don’t.

Each day, I will try to remember to count my blessings.