Singer Anita Cochran had famous friends in the room when she celebrated her last cancer treatment, but the person with her who mattered the most was her 89-year-old father. 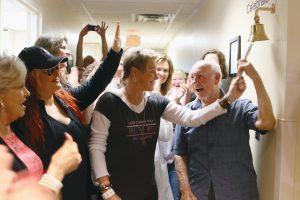 Cochran — a singer, songwriter, guitarist and record producer who penned the song “What If I Said” and took it to the No.1 spot in a duet with Steve Wariner — has a new song out about her battle against breast cancer. She plans to donate part of the proceeds from the song, “Fight Like a Girl,” to breast cancer charities.

“You have those days that you mark on your calendar and you say, ‘This is one of the happiest days in my life,’” Cochran said. “After I rang that bell, I said, ‘I’m the luckiest person in the world even though I went through breast cancer.’ I got to ring the bell.”

Her fight began in August 2017 when she noticed a lump in her right breast and was diagnosed with stage II breast cancer.

“Every person who was there helped me somehow throughout my entire year, whether they brought me a meal or helped me in the yard,” she said. “They are the best friends in the world.”

Her many musician friends staged a benefit for her to help with medical costs, and Cochran said she intends to pay it forward.

“I would sit in my chemo chair sometimes and watch people come in by themselves and talk about how they didn’t have their caretaker who could come sit with them that week,” she said. “It would break my heart. I have been so fortunate. That’s one reason why I want to pay it forward. I want everybody who is going through any kind of cancer to have a day like I did.”

In deciding to come to VICC for treatment, she followed a similar journey made by her father, Matthew Cockerham.

“Everybody there handles each patient with such loving care. It’s honest. It’s not fake. They really care. You can tell it. You can feel it. I just love them. I don’t ever want to have to go through chemotherapy again, but I’m going to miss seeing those ladies.”

In the first large-scale analysis of cardiovascular complications linked to immune checkpoint inhibitors, Vanderbilt researchers have shown that heart and vessel complications include myocarditis, pericarditis, vasculitis and arrhythmias, and that they occur early in the course of treatment. 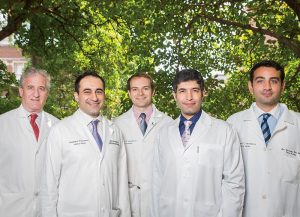 The study, published online Nov. 12, 2018, in The Lancet Oncology, augments previous work by Vanderbilt University Medical Center researchers who first reported in 2016 rare but fatal cardiac side effects from the most widely prescribed class of immunotherapies. The researchers used VigiBase, a global database of drug complications maintained by the World Health Organization, to track adverse cardiovascular reactions in the latest study.

“When the immune system wakes up to attack the cancer cells, in rare situations it can also attack the heart and vessels, and in some cases, this can result in fatalities,” said Joe-Elie Salem, MD, PhD, a Vanderbilt Cardio-Oncology Fellow and the study’s first author.

“This study suggests a role for a multi-disciplinary group that will help us characterize these novel and diverse side-effects of immunotherapies and identify those at risk,” said Douglas Johnson, MD, director of the melanoma program at Vanderbilt-Ingram Cancer Center and a study author.

Johnson, Moslehi and colleagues are forming an immuno-toxicity group with the hope of utilizing Vanderbilt resources like the REDCap database to track these toxicities. In addition, the group has established a web-based link (www.cardio-onc.org) for physicians nationally to report cases of cardiovascular complications related to immune checkpoint inhibitors, linking these cases to REDCap to collect data.

“We hope to leverage this unique collaboration and these studies that we have published over the past few years into something that is translatable to patient care,” Moslehi said.

The study was supported by AVIESAN, the National Cancer Institute, the James C. Bradford Jr. Melanoma Fund and the Melanoma Research Foundation.

Medically underserved women in the Southeast diagnosed with breast cancer or ovarian cancer missed out on genetic testing that could have helped them and their relatives make important decisions about their health, according to new research from Vanderbilt-Ingram Cancer Center.

Only 8 percent of disabled or older women who qualified for Medicare and met the criteria for BRCA1 and BRCA2 testing received it between 2000 and 2014, researchers determined after analyzing data from the Southern Community Cohort Study. The findings were published Aug. 14, 2018, in JAMA.

Women with breast cancer who have pathogenic BRCA mutations are more likely to develop cancer in a second breast and are also at higher risk for ovarian cancer. Women with ovarian cancer are more likely to develop breast cancer if they test positive for the mutations. Their relatives, if they also carry the mutations, are at higher risk for developing cancer as well.

“Women who carry one of these mutations but don’t know their mutation status are not able to take advantage of preventive or early detection interventions that we have available, so they miss out on the opportunity to reduce their risk for these cancers and potentially reduce their overall mortality,” said Amy Gross, PhD, an epidemiologist with the Vanderbilt Institute for Clinical and Translational Research.

Sirtex Medical Ltd. has renewed a grant award to Dan Brown, MD, professor of Radiology and Radiological Sciences and chief of Interventional Oncology, and his Vanderbilt Health colleagues for a research program designed to treat patients with liver tumors that cannot be addressed with surgery.

Brown has served as the principal investigator of the Vanderbilt-led research registry that tracks cancer patients whose tumors are treated with a radioactive isotope known as Yttrium-90 (Y-90).

Interventional oncology uses image-guided techniques to deliver therapy through the arteries to solid tumors. During the Y-90 treatment, experts insert a small catheter into an artery in the groin and thread the catheter to tumors in the liver. Using the catheter to deliver Y-90 to the liver tumors enables the physicians to precisely target the tumors with limited effect on healthy liver tissue.

The therapy is appropriate for patients whose cancer has not responded to standard therapy or has progressed despite treatment.

Sirtex is the global life-sciences firm that designed the SIR-Spheres Resin Microspheres.

These microspheres lodge in the microvasculature surrounding a tumor, and 94 percent of the radiation inside the spheres is delivered to the tumor within 11 days.

The research agreement renewal from Sirtex will provide $2.64 million over three years to support the patient registry. Combined with the original contract, reimbursement to Vanderbilt totals more than $3 million.

“This updated agreement with Sirtex shows their commitment to this research project, which will be the largest of its kind in the Interventional Radiology space at its conclusion. I would like to thank Sirtex Medical as well as the support staff here at Vanderbilt University Medical Center: Ursula Halmon, Catherine Gregor, Kristin Surdam and Jennifer Baker,” Brown said.

The current study includes both academic and private groups with the goal of collecting real world data about the use of this device for primary and metastatic liver cancer.

The registry includes tumor type, prescribed activity of radiation, any chemotherapy or immunotherapy drugs given and also includes a number of cell receptors that are treated with targeted therapies.

To date, 40 medical centers have opened registries, and 982 patients are now enrolled with a goal of reaching 3,000 patients.

“The updated contract will expedite the collection and review of patient data and will allow further development of the database, which will smooth out data entry and mining. This evolution of the study will enhance our abilities to publish as our data matures.

“We are looking to evaluate real-world usage to identify potential combinations of Y-90 and immunotherapy or chemotherapy that can be studied prospectively to improve patient care,” Brown said.

Internationally renowned breast cancer expert Ben Ho Park, MD, PhD, has been named co-leader of the Breast Cancer Research Program, director of Precision Oncology and associate director for Translational Research at Vanderbilt-Ingram Cancer Center (VICC). In his academic role, he will serve as professor of Medicine.

Park assumed his new post Sept. 1, 2018, following the departure of Carlos L. Arteaga, MD, who moved to the University of Texas Southwestern Medical Center as director of the Harold C. Simmons Comprehensive Cancer Center and associate dean of Oncology Programs.

“I am incredibly excited to join the VICC/VUMC team. Vanderbilt is already a world-renowned institution and is well known for its innovative programs in cancer research,” Park said. “Under the leadership of Drs. Jennifer Pietenpol, Kim Rathmell and Nancy Brown, I am thrilled and humbled to be given the opportunity to help co-lead the Breast Cancer Research Program along with my esteemed colleague, Dr. Ingrid Mayer, and guide the precision oncology effort that will help patients through molecular analyses and interpretation of their cancer DNA.”

He is a leader in the field of PIK3CA gene mutations and their relevance to breast cancer. In 2004, he was the first to identify a high frequency of PIK3CA mutations in breast cancer and then discovered their contributions toward oncogenic phenotypes. His work, including the generation of genetically modified cell lines, has been widely cited, and requests for his cell lines have led to important discoveries by other investigators.

Park has also made fundamental contributions to the field of drug resistance, including hormone therapy resistance.

Along with colleagues, he holds several patents for unique compounds used in treating various diseases.