Vanderbilt-Ingram Cancer Center (VICC) experts and the Prevent Cancer Foundation urged the public to “think about the link” between viruses and cancer during a July seminar.

The event, held in conjunction with the Tennessee Cancer Consortium’s annual conference, was one of several initiatives by VICC during 2017 to raise awareness about HPV vaccines that protect against cancer.

In January, VICC united with other National Cancer Institute (NCI)-designated cancer centers across the nation to support updated HPV vaccination recommendations from the U.S. Centers for Disease Control and Prevention (CDC.) The new CDC guidelines recommend that children ages 11 to 12 receive two doses of HPV vaccine at least six months apart. Adolescents and young adults, older than 15, should continue with the three-dose series. Although less effective, the vaccine is approved for men and women up to age 26.

“Cancer prevention is one of the most important public health missions for Vanderbilt-Ingram Cancer Center because we are located in a region with the highest cancer death rates in the country,” said Jennifer Pietenpol, Ph.D., director of VICC and executive vice president for research at Vanderbilt University Medical Center. “It is vitally important for physicians and parents to communicate about the value of HPV vaccination for adolescents and young adults to prevent cancers later in life.”

Douglas Lowy, M.D., visited VICC in January 2017, while serving as acting director of the NCI to deliver the George Daniel Brooks Lecture. An expert on HPV, Lowy said cancers associated with the virus “have been increasing substantially in recent years.”

In May 2017, Vanderbilt medical clinicians held a free head and neck cancer screening day for the public. During the screenings, they educated the public about the importance of getting young people HPV vaccinations.

Another initiative that was launched during Summer 2017 is a collaboration between the Vanderbilt Epidemiology Center and Cumberland Pediatric Foundation. It seeks to measure two methods for increasing vaccination rates. One method will use an in-person coach—a nurse educator—who will travel to 11 pediatric offices to conduct a needs assessment and train staff on how the HPV vaccine should be presented to patients and their families. The second method will provide a web-based version of this service to an equal number of clinics.

Pamela C. Hull, Ph.D., assistant professor of Medicine (Epidemiology), is leading the research effort with the support of a grant from the National Cancer Institute. “The challenge is how to get doctors and primary clinics to consistently make strong recommendations for HPV vaccinations and that these vaccinations occur at the appropriate ages,” Hull said. 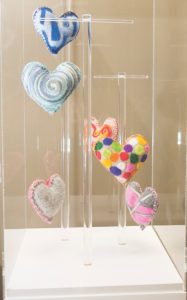 Small stuffed hearts made from felted wool or other fabrics are part of a new “Heart to Hold” initiative designed to provide comfort to cancer patients receiving radiation and their family members.

The Heart to Hold project was suggested by Mark Stavas, M.D., assistant professor of Radiation/Oncology and director of Supportive Radiation Services, who had received a similar fabric heart years earlier from the family of a cancer patient who died.

“It was a young gentleman who had metastatic colon cancer and his wife was in her third trimester of pregnancy at the time. He died shortly after the child was born.”

Stavas said the case was challenging because the young man was unable to speak about his grief at the end. But during treatments, he would hold a heart that his wife had sewn.

“After his death his wife gave me the heart that he had held as a gift in gratitude. I kept this heart for a year and a half before I started my practice. Every day I see what patients go through; transformative moments where there’s nothing you can say to make it better. Sometimes you just have to sit quietly with somebody and hold the space for uncertainty, or maybe give them an object. This idea of transferable objects, saying ‘I don’t know what this means but I’m here with you no matter what happens,’ and having a symbol for that, is what ultimately brought this idea to fruition,” Stavas said.

“I showed these to Mark and thought it would be awesome to have them on display as a kind of encouragement to other people to make hearts for our patients,” McDowell said.

Stavas commissioned artist friend Christopher Prinz from Omaha, Nebraska, to design an art installation to showcase the hearts. Next to the “Heart to Hold” display case, which now sits in the VICC lobby, visitors can pick up instruction sheets that explain how to make the hearts. 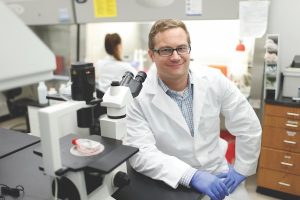 John Wilson, Ph.D., assistant professor of Chemical and Biomolecular Engineering at Vanderbilt University, has received an Innovative Research Grant from Stand Up To Cancer. Wilson is among 10 early-career scientists to receive the grant awards focused on immuno-oncology.

Stand Up To Cancer announced the awards in April during the 2017 Annual Meeting of the American Association for Cancer Research. The Innovative Research Grant program is funded by Bristol-Myers Squibb.

Wilson, who is also a member of Vanderbilt-Ingram Cancer Center, is trying to determine how a “cold” tumor that does not respond to immunotherapies can be reprogrammed into a “hot” tumor that is recognizable by the immune system.

Wilson said there are two reasons for this lack of response: 1) patients have nonimmunogenic or “cold” tumors that evade recognition by T-cells, and 2) some patients lack a sufficient number of the correct type of anti-tumor T-cells necessary to efficiently destroy tumors.

He plans to develop “smart” nanoparticles loaded with a small molecule that will act on inflammatory pathways to transform “cold” tumors into “hot” ones. He also plans to load the nanoparticles with tumor antigens to better train T-cells to recognize and attack cancer cells.

Staff members from Vanderbilt-Ingram Cancer Center (VICC) garnered an impressive second place finish in the 2017 Downtown Derby Bed Race competition held in May. The annual event, which raises funds for the T.J. Martell Foundation, featured teams that built and decorated their own “beds” to race in downtown Nashville. 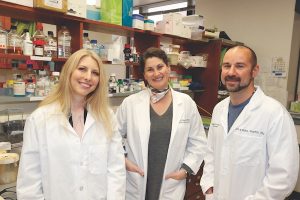 The grants totaling more than $3 million will fund mechanistic science and clinical trials designed to test novel therapy combinations and determine why some forms of breast cancer become resistant to therapy.

In recent years there have been great strides in treatment for early breast cancer, but in some patients the disease does not respond or becomes resistant to therapy and continues to spread or metastasize. Investigators at academic medical centers like Vanderbilt University Medical Center (VUMC), often with funding from the federal government and nonprofit foundations, are focused on helping patients with advanced disease.

Mayer, along with Justin Balko, Ph.D., Pharm.D., assistant professor of Medicine and Cancer Biology and leader of Molecular Oncology in the Center for Cancer-Targeted Therapies, will serve as co-principal investigators on another large multi-center trial evaluating multiple immune therapy combinations. That trial is supported by $1.5 million from Pfizer and the Breast Cancer Research Foundation.

W. Kimryn Rathmell, M.D., Ph.D., director of the Division of Hematology/Oncology at Vanderbilt University Medical Center, has been named vice president of The American Society for Clinical Investigation (ASCI).

Rathmell, who is the Cornelius Abernathy Craig Professor of Medicine, will serve a four-year term, initially as vice president, then president-elect in 2018, president in 2019 and immediate past president of the ASCI in 2020.

The ASCI is an elite honor society of physician-scientists. Founded in 1908, the Society has nearly 3,000 members from the upper ranks of academic medicine and industry.

“I am delighted by the opportunity to serve this community of exceptional physician-scientists,” Rathmell said. “I view my role as raising the visibility of this career path to allow for increased engagement of physician-scientists at all levels in the national conversation around biomedical research training, funding and translation to the benefit of human health.”

Rathmell’s research focuses on the genetic and molecular signals that drive renal cell carcinomas (kidney cancers), which affect more than 60,000 new patients annually in the U.S.

She specializes in the treatment of patients with rare and complex kidney cancers as well as hereditary kidney cancer syndromes. Her research program includes basic mechanisms of cancer, innovative imaging strategies and novel therapeutics.