The CCTT is an extension of the Cancer Center’s expertise in personalized medicine. Through the VICC Personalized Cancer Medicine Initiative, translational and clinical investigators focus on genomic signatures in a patient’s tumor and use that information to match the patient to a targeted therapy.

The overall goal of the new initiative is to integrate the “first-in-human” drug development efforts at VICC with state-of-the-art molecular profiling of tumors and novel imaging approaches that predict drug action and efficacy. The net outcome of this integration will be an expansion of VICC clinical trials that should contribute to faster approval of new targeted drugs and combination therapies for cancer patients.

“This is very exciting to me because it represents an opportunity to incorporate the mechanistic sciences with imaging and with drug development, using predictive molecular biomarkers,” said Arteaga.

“All of these are local strengths at Vanderbilt. Thus, I think it’s time that we make a concerted effort to integrate all of these strengths into something that can accelerate the clinical development of drugs and combination therapies. The creation of this center represents a very clear message that reaffirms the commitment of our center to drug development in cancer for the benefit of patients.”

The new VICCRN will create a regional cancer research consortium by providing clinical research opportunities between VICC investigators and affiliate partners in Tennessee and surrounding states. As director, Arteaga will work closely with leaders of the health care systems that provide care to thousands of cancer patients in the region.

“The VICCRN provides an opportunity to expand our mission as the only National Cancer Institute-designated center focusing on adult cancer in Tennessee,” said Arteaga. “I think this will allow us to really expand our accrual to clinical trials and to uphold our responsibility to make clinical research accessible to patients in the region.”

“This is an opportunity for Carlos to provide his expertise and leadership over a much larger region in the Southeast, and we anticipate his leadership will be transformational,” said Jennifer Pietenpol, Ph.D., director of VICC.

Robert Coffey Jr., M.D., Ingram Professor of Cancer Research, has received a five-year, $5.2 million grant from the National Institutes of Health (NIH) to study the role of extracellular RNA (exRNA) in colorectal cancer.

Coffey’s is one of 24 grants totaling $17 million awarded to 20 institutions through the collaborative, cross-cutting Extracellular RNA Communication program. The program is supported by the NIH Common Fund and led by a team representing five different NIH institutes and centers.

Most RNA works inside cells to translate genes into proteins that are necessary for organisms to function. Now, recent findings show cells can release RNA in the form of exRNA to travel through body fluids and affect other cells.

Researchers hope to use some kinds of exRNA as biomarkers, or indicators of the presence, absence or stage of a disease, or to develop new molecular-based therapies.

His lab will work with two teams of investigators from the University of California, San Francisco, and one team each from Massachusetts General Hospital and Rockefeller University to examine the mechanisms of exRNA biogenesis (production), distribution and function.

Vanderbilt research scientist Melinda Aldrich, Ph.D., MPH, has been awarded a National Institutes of Health Academic Career Award to investigate some of the genetic secrets behind a greater risk of lung cancer among African-Americans compared with other racial and ethnic groups.

Though smoking is certainly a well-documented risk factor for lung cancer, it does not explain the racial disparity in lung cancer risk. Therefore, Aldrich believes a genetic difference may lie at the root of the problem.

In June, award-winning country music star Martina McBride and a group of her fans presented a check for $40,550 in support of cancer research at Vanderbilt-Ingram Cancer Center. 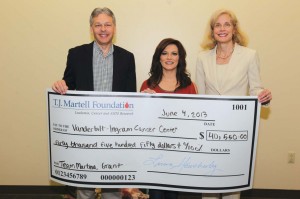 Some of the singer’s fans formed a community service group called Team Martina after being inspired by McBride’s recent song, “I’m Gonna Love You Through It,” which highlights the challenges faced by breast cancer patients. Team Martina now includes hundreds of members from several states and countries who raise funds in support of a variety of causes, including breast cancer research.

McBride said Team Martina has taken the message from her music and “made it real and living.”

VICC director Jennifer Pietenpol, Ph.D., accepted the research donation, saying, “The way we know to love you through it is to move our research from the bench to the patient.”

Jennifer Pietenpol, Ph.D., director of VICC and professor of Biochemistry, has been awarded $225,000 to further her study of triple negative breast cancer (TNBC), an especially aggressive form of the disease with a poor survival rate. Pietenpol, who is a Komen Scholar, and her colleagues previously identified six subtypes of TNBC, along with specific chemotherapy treatments that are more effective for some subtypes of the disease. The group is initiating clinical trials aimed at identifying new biomarkers that can help guide treatment decisions for patients with TNBC.

Brian Lehmann, Ph.D., will receive a $450,000 grant in support of his cancer research. Lehmann, research assistant professor of Biochemistry working in Pietenpol’s laboratory, is investigating the role of the male sex hormone androgen in breast cancer subtypes. While the female estrogen hormone drives tumor growth in the majority of breast cancers, the androgen receptor is also present in more than 60 percent of breast cancers. Lehmann is trying to determine if drugs that target the androgen receptor will increase the effectiveness of estrogen receptor inhibitor drugs or if they could be used in patients whose tumors have become resistant to anti-estrogen drugs.

The first award provides $250,000 to collect and study residual breast cancers that remain after neoadjuvant treatment, in hopes of discovering novel biomarkers and mechanisms of drug resistance. By identifying these molecular alterations, new therapies may be developed for immediate use after surgery to target breast cancers that are still present as micrometastases and eliminate them.

The second grant provides $75,000 for initiation and support of a Neoadjuvant Therapy Consortium between VICC and the Instituto Nacional de Enfermedades Neoplásicas (INEN) in Lima, Perú, a center of clinical research excellence in South America. These collaborative efforts will also focus on molecular discovery in neoadjuvant trials.

“We are especially grateful to Susan G. Komen and the Komen Greater Nashville Affiliate for their continued support of our translational breast cancer research at Vanderbilt-Ingram,” said Pietenpol. “These are significant grant awards that will advance our understanding of the underlying causes of breast cancer and allow us to develop more effective treatments for patients worldwide.”

The Komen Greater Nashville Affiliate has invested more than $4 million in community breast cancer programs in 11 counties in the past 12 years.

Puck Ohi, Ph.D., assistant professor of Cell and Developmental Biology, has received the Leukemia & Lymphoma Society SCHOLAR award for his research on the role of enzymes that affect cell division, which has implications for treating cancer and blood disorders like leukemia and lymphoma.

The five-year research grant will provide more than $500,000 to support Ohi’s research. 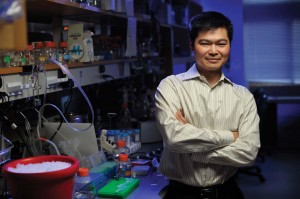 “Anti-mitotics” are commonly employed anti-cancer drugs which work by derailing the process of cell division. Two enzymes that work together during cell division to build the mitotic spindle (a cellular device that separates replicated chromosomes as cells divide) are Eg5 and Kif15. The role of Eg5 during spindle assembly has been well-defined by investigators in the field and Eg5 inhibitors are currently in clinical trials as cancer drugs.

“In contrast, the function of Kif15 during spindle formation is not known, and drugs targeting this protein do not exist,” Ohi said.

Work done by Emma Sturgill, a graduate student in Ohi’s lab, has laid the foundation to better understand the role of Kif15 during spindle assembly, and produced human cell lines that promise to be potent drug discovery tools in the pursuit of Kif15 inhibitors.

“Our ultimate goal is to discover drugs that inhibit or block Kif15 to test our hypothesis that combination therapies of Eg5 and Kif15 inhibitors will be superior to Eg5 inhibitor monotherapies. Since leukemic cells are exquisitely sensitive to Eg5 drugs, our first priority is to apply concepts and tools that emerge from our work to blood borne cancers,” Ohi said.

Daniel Brown, M.D., has been named chief of Interventional Oncology, a new division within the Department of Radiology and Radiological Sciences.

Patients are often unfamiliar with the burgeoning interventional oncology subspecialty. It even can be confused with radiation oncology, but Brown said the fields take a different approach.

“Radiation oncology treats from the outside in to kill a tumor. Interventional oncology works from the inside out, and everything we do is with imaging guidance, which lets us be very precise, down to the level of a few millimeters,” Brown said.

Chemotherapy, surgery and radiation have been mainstays of cancer treatment, and Brown says interventional oncology is “another tool in the toolbox.”

“There is so much room to grow and work collaboratively with other departments. Often patients have had surgery and reached the limits of radiation and chemotherapy and still develop a new tumor. That’s where interventional oncology is playing a large role,” Brown said.

Most interventional oncology procedures fall into two categories—arterial or ablative. Arterial treatments use a tumor’s vasculature to deliver microscopic beads infused with radioactive material or chemotherapy. Ablative therapies use needles to either heat (radiofrequency or microwave ablation) or freeze (cryoablation) a tumor.

As more research studies demonstrate the safety and efficacy of interventional oncology, Brown says these procedures

will soon be integrated into standard care algorithms, instead of viewed as alternative therapies.

“This is a great time to watch this field take off as evidence continues to mount. I’m really excited about the opportunity to build this program at Vanderbilt and make it an institutional leader in the field.”

A small molecule inhibitor of ALK was recently FDA approved to treat ALK+ lung cancer. However, as is consistent with other small molecule inhibitors in clinical use, disease progression after initial response, a concept referred to as “acquired resistance,” is evident. Lovly is working to develop new therapeutic agents or drug combinations that delay or overcome this acquired resistance.