“When it’s you, it’s a whole different feeling,” Orrin Ingram said, gazing at logs burning in the fireplace.

A black Labrador puppy slept near his feet. Outside the window of his farmhouse, the remnants of a January snow slowly melted.

“I never really thought that at 57 years old that I would be diagnosed with cancer myself,” he said.

It was two weeks since the day that he had undergone surgery for prostate cancer at Vanderbilt University Medical Center. He had spent that time surrounded by family, playing with his dogs, indulging on chicken wings and trying to heed doctor’s orders to not over-exert himself — a difficult endeavor for a man accustomed to riding horses, raising cattle or hunting when he isn’t running the nation’s largest barge company among other businesses.

“I had people calling from all over the country trying to get me to go here or go there or get this procedure done or that procedure done,” said Ingram, president and chief executive officer of Ingram Industries Inc. “I told them, ‘I have spent over 20 years of my life working to raise money for Vanderbilt. There is no way in the world I am going anywhere else. You are just wasting your breath.’”

Ingram describes himself as a “mercenary” for Vanderbilt-Ingram Cancer Center (VICC), where he’s chair of the Board of Overseers, a volunteer group of supporters and advocates. The center is named in honor of his father, E. Bronson Ingram, who died at age 63 in 1995 after being diagnosed with cancer of an unknown primary origin, cancer that was not caught early and had spread throughout his body. Noting that his father had elevated prostate-specific antigen (PSA) levels, Ingram said he believes the cancer likely originated in the prostate.

An annual physical alerted Orrin Ingram’s primary physician that he should be checked for prostate cancer. His doctor had been carefully monitoring his PSA levels and noticed changes over a period of time that might indicate prostate cancer. She referred him to Sam S. Chang, MD, the Patricia and Rodes Hart Professor of Urologic Surgery and vice-chair of the Department of Urologic Surgery. Vanderbilt’s urology program is among the nation’s top 10, according to the 2017-18 edition of “America’s Best Hospitals” by U.S. News and World Report.

“At Vanderbilt, we have access to some of the newest and best diagnostic techniques, which in his case combined MRI imaging with the ability to utilize that MRI at the same time as we do our routine prostate biopsy,” Chang said. “So you are able to maximize and combine the benefits of different diagnostic tests in one sitting.”

The tests confirmed Ingram had localized cancer. Though frightened and distraught by the news, his wife, Lee Ann Ingram, and children rallied around him as he weighed the treatment options Chang set forth.

“The main treatments for prostate cancer are some form of radiation versus surgery versus active surveillance, which is carefully monitoring and evaluating the prostate and then deciding when and if treatment would be best indicated,” Chang said. “Each patient’s situation is individualized regarding his risks and his concerns so we talked about the pros and cons of each for him.”

Ultimately, the decision is up to the patient. The family history of cancer weighed heavily on Ingram, and at the urging of Lee Ann and the children, he decided to take swift, aggressive action.

“I wanted to be cancer free so I got rid of the damned thing,” he said.

Ingram underwent a robotic prostatectomy on Jan. 3. The surgery was done laparoscopically through small incisions in his abdomen. 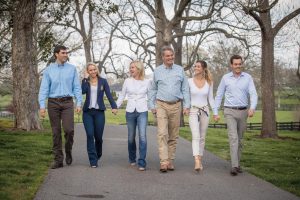 Orrin Ingram and his family opted to take an aggressive approach to treatment when he was diagnosed with prostate cancer. He underwent a robotic prostatectomy at Vanderbilt earlier this year. From left are son Aaron Barrett and his wife, Camille, Lee Ann and Orrin Ingram, daughter, Virginia Ingram, and son, Hank Ingram.

“Mother (Martha Rivers Ingram) was probably the most scared because she lost Dad to cancer,” he said. “After she met Dr. Chang in the recovery room, he became her new hero.”

Ingram was in the hospital for less than 24 hours. He joked about how quickly nurses graduated him from yellow socks that indicate a fall-risk to gray socks that allow patients to walk unaccompanied.

“They were exhausted from trying to walk with me,” he said.

Chang said he wasn’t surprised by how quickly Ingram rebounded, with the steadfast support of his family and friends.

“To his credit, he is in wonderful shape,” Chang said. “That helps with recovery from any operative procedure.”

Ingram said he is grateful to all those who have given money, volunteered time and donated tissue samples for research at VICC throughout the years. People who donate have typically been directly affected by cancer.

“It’s kind of weird when it goes full circle and then it comes back and you happen to be a beneficiary,” Ingram said.

The family of Bronson Ingram made the cornerstone investment in a national campaign led by Orrin Ingram in 1999 that raised more than $180 million — money that helped elevate the Cancer Center into one of the nation’s best.

“I lost my dad to cancer and got really mad about not being able to do anything about it,” he said. “Helping to raise the money through the Imagine a World Without Cancer campaign was fabulous therapy for me. Even though I was helpless with him, it made me feel like I could do something to help other people.”

Although cancer is still very much a reality almost two decades later, researchers have made great strides in recent years with breakthroughs in precision medicine, targeted therapies and immunotherapies. These breakthroughs are often linked to genotyping.

Other than skin cancer, prostate cancer is the most common cancer in American men, with about one in nine being diagnosed during his lifetime.

Ingram, his brother John Ingram and fellow Board of Overseers member Ronnie James recently led an effort that raised $5 million to help defray the cost of genotyping patients’ tumors when health insurance policies won’t reimburse for it. Genotyping can help physicians determine best treatment options, especially with metastatic cancers. There is not yet a cure for metastatic prostate cancer, Chang stressed.

Ingram said he considers himself lucky because his cancer was caught before it spread.

“Cancer is shocking,” he said. “It’s one thing when you are talking about it, even if it’s your father or another family member.

I really did think I would be dealing with cancer in my life. I wasn’t ignoring it. But I thought it would happen in my 60s, not in my 50s. That’s just how quickly that C-word got personal for me. It makes you think hard. It’s good to have a second chance.

“I’m well aware that my odds of recovery today are far better than my father’s were 23 years ago because of the research that has been conducted here and elsewhere. I think a lot about what advances can be accomplished in the future, so that things will be better for the next generation. And I’m more determined than ever to do all I can to make that a reality.”