You have signed on the dotted line, giving Vanderbilt-Ingram Cancer Center permission to keep whatever tissue is left over from the biopsy of your melanoma tumor. What happens next? You obviously don’t want these cells gone wild, but VICC researchers are clamoring for the tissue to use it for the next discoveries in genetics and drug therapies.

1. Holly Crandall, the technician who manages the collection, storage and distribution of samples in the melanoma tissue repository, holds up a piece of a tumor surgically collected from a patient’s small bowel just hours earlier. Smaller pieces are frozen, while the biggest tumor sample collected from a patient is put in formalin, a preserving agent, for a minimum of 24 hours. 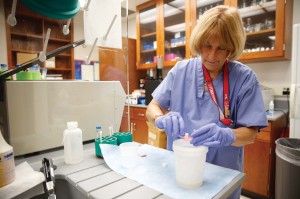 2. Crandall then pours off the formalin and places the tumor into a plastic case called a cassette before taking it to the Translational Pathology Shared Resource, where the tumor will be embedded in paraffin, a type of wax.

3. Racks of wax tumor blocks reside in Crandall’s office. She has a record of each sample’s repository number, the patient’s gender, the site the tissue came from and the date, but no other identifying information. Researchers will contact Crandall with certain criteria for a study, and she will pull the appropriate blocks and shave off a tiny sliver of each tumor. 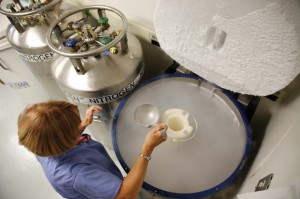 4. The smaller pieces of a patient’s tissue are put in cryotubes and flash frozen using liquid nitrogen. “That makes them as close to fresh as possible,” Crandall said. 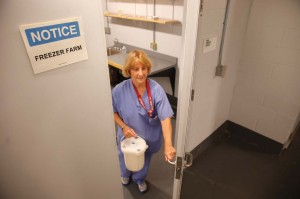 5. VICC’s repository of frozen tissue samples was founded by Jeffrey Sosman, M.D., and Mark Kelley, M.D., and goes back 10 years. “We get consent from almost every new patient with melanoma. Pretty much everyone agrees to it. They’re very willing to help,” Crandall said.

6. Each frozen sample is labeled and placed in a numbered slot in a box that holds 100 cryotubes. The boxes go on racks of 16 and are kept in a freezer at -86 degrees Celsius. As of July, the repository had 6,990 frozen samples and 346 wax blocks stored from 516 patient volunteers.

7. Katie Hutchinson, a graduate student in the lab of William Pao, M.D., Ph.D., readies a frozen melanoma tissue sample for genetic testing. The first step is to crush the tissue with an old-fashioned mortar and pestle, which breaks up the cells for easier processing. “My speciality is in identifying new targets for therapy in melanomas without known targets,” Hutchinson said. “I sequence as many patient DNA samples as I can in hopes of finding new mutations in genes that could serve as drug targets.” 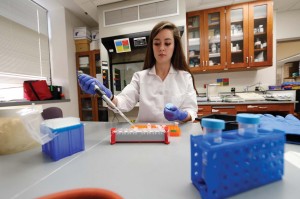 8. Hutchinson adds various liquids called buffer solutions that break down the cell parts and isolate the DNA for testing. “When a patient has genetic testing and it comes back with no known mutations, they’re wondering what do we do now? That’s what I’m working on, helping that third of patients with no treatment options.”

9. Hutchinson also receives fresh tissue from Crandall to make new cell lines. “Because it’s cancer, if I feed it, it keeps growing,” Hutchinson said. Compared to the dead frozen tissue, these cell lines are alive and growing and perfect for drug studies. Hutchinson says that under the microscope, “they all look different. No patient’s tumor and cells are the same.”