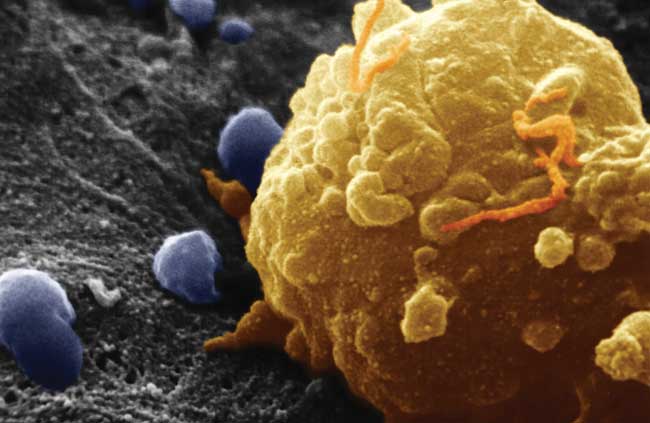 Just over 40 years ago, President Richard Nixon signed the National Cancer Act into law. The act expanded federal cancer research efforts and marked the beginning of the “War on Cancer,” a war that has lasted four decades and is still going strong.

One of the most promising developments to come out of this “war” in recent years has been the use of information about the genetic makeup of patients’ tumors to select therapies that target a particular mutation within an individual’s tumor – an approach dubbed “personalized medicine.”

It has undoubtedly changed the outlook for patients with the deadliest form of skin cancer, melanoma – and Vanderbilt-Ingram Cancer Center researchers have played a prominent role.

“In my opinion, melanoma has been the most frustrating of solid tumors, with only one new drug approved in the past 40 years,” said Jeffrey Sosman, M.D., Ingram Professor of Cancer Research and director of the Melanoma Program at Vanderbilt-Ingram.

When detected in its early stages, melanoma can be curable. But once it spreads, or metastasizes, beyond the skin to distant sites in the body, it becomes lethal. Fewer than 10 percent of patients with metastatic melanoma are alive five years after diagnosis unless surgery can remove all their disease.

“There have been some positive results with various therapies in a small minority of patients, but the great majority of patients do not respond to the chemotherapy or immunotherapy treatments that we have,” Sosman said.

In 2002, investigators reported that about 60 percent of melanomas contained a mutation in the BRAF gene. The protein encoded by this gene normally functions in a cell growth signaling pathway, and the mutation activates the pathway and causes cells in culture to behave like tumor cells.

“Everyone who read that paper said ‘this is a target for melanoma – if we can target BRAF, we’re going to see responses in melanoma,’” Sosman recalled. 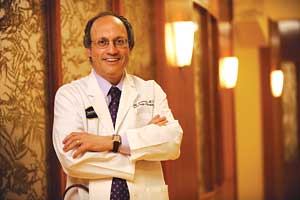 Jeffrey Sosman, M.D., and colleagues at Vanderbilt-Ingram have played an integral part in recent advances for treating metastatic melanoma. (Photo by John Russell)

Plexxikon Inc., a small, California-based biotechnology company, and Roche Pharmaceuticals took note of the findings and worked toward developing a drug targeting the BRAF mutation. In 2006, clinical trials of the resulting drug, then called PLX4032, began, headed up by Keith Flaherty, M.D., from the University of Pennsylvania (now at Massachusetts General Hospital of Harvard University) and Paul Chapman, M.D., of Memorial Sloan-Kettering Cancer Center.

In 2010, the striking results from the Phase I trial were published in the New England Journal of Medicine (NEJM): nearly all patients with the BRAF mutation treated with PLX4032 showed some response and 81 percent of patients had tumor shrinkage of at least 30 percent. Many patients also showed significant improvement of their symptoms.

“In the more than 20 years I have been taking care of melanoma patients, I have not seen this kind of response to a therapy,” Sosman said.

A Phase III trial established that PLX4032 improved survival compared to chemotherapy, but the trial’s short follow-up provided little insight into long-term outcomes. A Phase II trial with much longer follow-up of 132 patients showed that the drug extended overall survival time from six to 10 months for most patients with metastatic disease to 16 months for patients taking the drug. The trial, led by Sosman at Vanderbilt-Ingram and Antoni Ribas, M.D., at UCLA’s Jonsson Comprehensive Cancer Center, was published in February in the NEJM.

The drug, now known as vemurafenib (brand name Zelboraf), was approved by the Food and Drug Administration for treatment of late-stage melanoma in August 2011.

“The world of melanoma treatment has changed,” Sosman said. “It’s really very exciting to treat patients whose tumors have the right genetic profile with this drug and expect them to respond, and for the most part they do.”

One drawback, however, is that the great majority of patients develop resistance to the drug and their tumors eventually progress.

In collaboration with investigators at other centers, Sosman, Puzanov and Vanderbilt-Ingram colleague Mark Kelley, M.D., have identified several pathways responsible for the resistance, suggesting that drugs targeting these pathways could be used in addition to vemurafenib to forestall resistance.

Since only around half of patients have the BRAF mutation targetable by vemurafenib, it is critical to identify other drug targets in melanoma. An important effort has been led by Vanderbilt-Ingram investigator Ann Richmond, Ph.D., and colleagues who have identified another key player in melanoma tumor development – a signaling molecule called IKKβ – that could represent another target for developing drugs to treat melanoma.

Advances in this personalized approach to treating melanoma may also have much broader impact on other cancer types. For example, the BRAF mutation targeted by vemurafenib is present (at a lower frequency) in thyroid, colon and lung cancers.

“Cancers of the same genetic abnormalities should be treated the same whether they come from the skin or the colon or the lung,” said Sosman. “We finally have a way to identify patients with a specific mutation who are most likely to benefit from a treatment, and a drug that targets that mutation.”

“This is the promise of personalized medicine, and Vanderbilt’s patients are benefiting from this approach to cancer treatment.”