Spotlight On: Head and Neck Cancer

Lori Stegner, a veteran of Nashville’s entertainment industry, found a new voice after cancer claimed nearly two-thirds of her tongue.

Lori Stegner has spent most of her life entertaining audiences, starting with family and friends during her childhood. “I remember my dad bought me my first little boom box that had a microphone on it and I would sing with the radio, so I was always performing,” she said.

Stegner, now 49, hadn’t considered a career in entertainment until her sophomore year at Florida State University when a girlfriend heard her sing. Her stunning voice made a big impression.

She remembered her friend “happened to be doing her internship at a local studio in Tallahassee and she said, ‘You have to come sing for my producer.’”

Stegner auditioned and was immediately hired to sing demos and radio jingles. The girl with the sparkling eyes, engaging smile and amazing voice was soon the lead singer for local bands. After graduating from college, she nailed an audition to become a performer at the Opryland theme park in Nashville, where she spent nearly 10 seasons as a singer and dancer.

In addition to the Opryland shows, Lori also performed solo several times on the Grand Ole Opry and appeared live as a featured singer on the “Nashville Now” TV show. After Opryland closed in 1997, Stegner successfully transitioned her career to incorporate voice-over, country star impersonations and commercial acting on TV and radio. Along the way, the long-legged singer with the tremendous vocal range sang backup for other entertainers and toured with Brenda Lee and Ray Stevens.

But in 2011, a sore throat and tongue lesion led to a diagnosis of oral cancer—prematurely interrupting her career trajectory as a vocal artist and forcing her to rewrite her life script as she battled to retain the use of her throat to swallow, speak and even eat solid food again.

Heartaches by the Number

At first, Stegner tried to ignore the painful patches that appeared on her tongue. She was busy entertaining audiences at conventions, trade shows and corporate events with her dead-on vocal impressions of Shania Twain, Patsy Cline and Dolly Parton. Her ear, nose and throat (ENT) specialist treated her with antibiotics and anti-viral medications, to no avail.

During this same time, Stegner’s husband, Phillip, was diagnosed with prostate cancer and for the next few months, caring for him became her first priority.

But when her throat symptoms wouldn’t go away after a surface biopsy on the lesion proved negative, Stegner’s ENT insisted that she undergo a deep-tissue biopsy of the back portion of her tongue. The diagnosis was devastating—Stage III squamous cell carcinoma of the base of the tongue.

More than 41,000 patients are diagnosed with cancer of the oral cavity in the United States annually, according to the National Cancer Institute, and more than 7,800 die from the disease. Known risk factors for head and neck cancer include heavy alcohol and tobacco use and infection with the human papillomavirus (HPV).

Stegner had none of those risk factors and the cause of her cancer remains a mystery.

“I lived as healthy as I could, even often eating organic, but cancer knows no race, age or religion. My lifestyle certainly did not keep me from being diagnosed. If it can happen to me, it can happen to anyone,” she said.

While Phillip recovered from his own cancer surgery, the couple prepared for Lori’s cancer journey.

“We wanted the best medical attention and that meant Vanderbilt for us,” she said.

A family friend referred the Stegners to Vanderbilt-Ingram Cancer Center where a team of head and neck cancer specialists devised a complex treatment plan designed to save Lori’s life and preserve her ability to speak and swallow.

Head and neck cancer patients may need a range of support services during and after treatment, and advice from other survivors and caregivers can be invaluable.

“Today, our team of amazingly skilled surgeons, including Drs. Robert Sinard, Kyle Mannion and Sarah Rohde, who treat a tremendous volume of head and neck cancer patients, have helped us become a national and international referral center for advanced cancer care.”

During the more than 10-hour surgery, one VICC surgeon removed the tumor at the base of Stegner’s tongue, along with 19 lymph nodes, and surgeon Sarah Rohde, M.D., assistant professor of Otolaryngology, began the reconstruction process.

The tongue is actually a large muscle with two segments, the oral tongue—visible when the mouth is open—and the base of tongue, which works like a piston to push food down to the esophagus. Because Stegner’s tumor was so large, nearly two-thirds of her tongue had to be removed which presented two reconstructive issues—speech, which uses mainly the oral tongue, and swallowing, which involves both portions.

Rohde said Stegner’s best chance for good functional outcome was the use of a microvascular free flap, which is tissue transferred from another part of the body.

“I tell patients to think of it like a transplant,” explained Rohde. “We’re taking tissue from one part of their body, sewing the artery and the vein into their neck and convincing it that it’s supposed to live in another part of their body.”

Rohde said skin from Stegner’s lower arm was perfect for the free flap “because it’s the skin and soft tissue and fascia … and it’s thin, pliable tissue and that’s what we want in the tongue. We want something that the remaining portion of the tongue can push around and manipulate.”

Patients who undergo this type of surgery are typically hospitalized for about a week, and they may have a tracheostomy tube to help them breathe and a feeding tube to the stomach to provide nourishment while the surgical site begins the healing process.

Following this intense surgery and because cancerous cells were found in a nearby nerve, Stegner faced more treatment to prevent a recurrence of cancer—27 days of radiation therapy and five rounds of chemotherapy.

At VICC, head and neck cancer patients are treated by a multidisciplinary group of surgeons, radiation oncologists, medical oncologists and pathologists who work together as a team to coordinate the patient’s care.

The intensity modulated radiation therapy (IMRT) Stegner received is an advanced form of treatment that allows radiation oncologists to target the cancer more precisely. During treatment, the linear accelerator machine can actually move around the patient in a 3-D fashion while lead panels (like leaves on a tree) move in and out to shape the radiation beam.

“The ‘leaves’ are actually moving while the beam is on and that is what makes it intensity modulated,” explained Kenneth Niermann, M.D., MSCI, assistant professor of Radiation Oncology. “The ‘leaves’ move at different rates so that we can give a higher dose in one region and lower dose in another region.”

Radiation oncologists like Niermann begin with each patient’s CT scan or MRI and use a computer mouse to “paint how much dose we want going to different areas. We paint where the cancer regions are at risk and we also use the mouse to paint in the areas of the spinal cord and the vital organs [that must be protected].”

The computer then devises a plan that calculates how fast the leaves should be moving, which areas of the body will be exposed, and how many milliseconds the beam should be in use.

Niermann said the technology has been especially important for head and neck cancers, helping to reduce the treatment side effects while still maintaining a high dose of radiation to the tumor.

A Little Help From My Friends

Like other patients who undergo three different forms of intensive treatment, Stegner experienced serious side effects. She says a medical resident at Vanderbilt helped her understand that her recovery would not happen overnight and learning to use her reconstructed tongue would be “a process.” 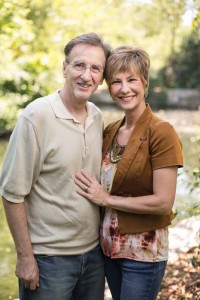 Phillip and Lori Stenger, both veterans of Nashville’s entertainment industry, supported each other through prostate and head and neck cancer treatments. Photo by Daniel Dubois.

“We know that patients are going to have problems post-treatment. But if we work really hard initially during an early post-treatment period, then chances are we’re going to be able to recover patients closer to their norm and that’s our goal,” Murphy said.

Stegner says the 20 months since her surgery have truly been “the fight of my life, just as several doctors had told me it would be…emotionally, physically, spiritually. I have had to learn to eat, speak and swallow all over again.”

She has regained her ability to speak well and be understood which she attributes to her vocal training.

“So much of that comes because I was in voice-over and, thankfully I still have the tip of my tongue to be able to reach for the roof of my mouth. Even though the base of my tongue is sewn to the floor of my mouth, I continually strive to exercise and stretch every bit of what muscle is left,” Stegner explained.

While she can sing a little, she can no longer make a living with her voice, which may be the most difficult part of the journey for a woman who was at the peak of her career.

“For myself and many survivors, the greatest loss is grieving our careers. I did it all and was very blessed. I was well known for my speaking voice and now, painfully, that precision speaking ability is forever gone, along with most of my career,” said Stegner.

In search of other patients like herself, Stegner joined a head and neck cancer support group at Gilda’s Club Nashville and she agreed to provide advice for a patient in another state.

She says she has realized that she is a human being who can and should be defined by more than just her career.

“People see my heart, my ‘little light.’ Maybe I will touch more people from this than I could have ever reached in my entertainment career.”

Members of VICC’s head and neck cancer treatment team say patients like Stegner who have demonstrated a determination to heal, to thrive and to help other patients are a reminder of the reason they entered the field of oncology.

“As a radiation oncologist, working with patients like Lori confirms my belief that I have met my calling serving cancer patients,” said Niermann. “She’s really an inspirational patient who has approached her challenges and obstacles with a lot of courage and confidence. In cancer, there are days where you feel stronger or days when you feel weaker. But overall, patients who are in this situation show strength and it’s really a privilege for me as a doctor to be part of that journey with them.”