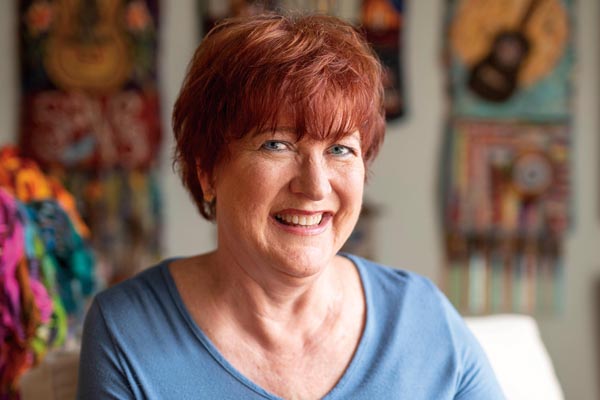 People ask, “What’s it like to be an identical twin?” In my case, it feels normal to have someone who looks and sounds like me, has the same mannerisms, clothing and shoe size. But, it is a bit freaky when my twin sister, Randy, leaves a voice message and I think it’s me on the recording. It’s also freaky that we once had the same dream the same night.

We share something else in common: We are both breast cancer survivors, and we have increased cancer risk due to an inherited gene mutation.

Randy was diagnosed with breast cancer first. The tumor was discovered in 2001 on a mammogram she almost canceled due to her hectic schedule. At age 46, she was raising 14-month-old triplets and a 14 year old in Atlanta. She had the breast removed, underwent chemotherapy and delayed reconstructive surgery until the triplets went off to kindergarten. After several years passed, she breathed a sigh of relief and quit worrying about cancer.

Then, in 2007, our mother passed away at age 84. Mom had a fear of doctors and never had a mammogram. She’d had neck pain for two years, and we finally talked her into a doctor’s visit. It seemed her cancer had started in the breast and metastasized. She was with us only three more weeks.

Mom was a creative woman, and we inherited her artistic genes with our side gigs. After working her day job teaching autistic children, Randy spends her evenings painting portraits of children and pets. After selling real estate and flipping houses by day, I became a hooker like my mom — a rug hooker. I create contemporary wool tapestries.

But we got the bad genes along with the good genes. After our mother died, Randy and I each asked our gynecologists if we should worry about a genetic link to cancer. Both doctors said no, citing Mom’s advanced age as the most likely culprit for her cancer.

Then cancer struck again. In 2016, Randy’s mammogram revealed a new and different cancer in her other breast. Genetic testing had finally become much more affordable and commonplace, so one surgeon suggested it even though he said Randy had only a 2% chance of testing positive. So much for those odds. She tested BRCA2 gene positive.

Randy apologetically broke the news to me. Being an identical twin, I knew I’d test positive too. But I delayed getting official confirmation for a few months because I wasn’t prepared to face how my life might change.

In the spring of 2017, I ordered an at-home saliva test via Color Genomics, which was very affordably priced and easy to do. A genetics counselor from the company followed up with a phone consultation and she went over my positive BRCA2 results and discussed my options. My report indicated I had greatly increased odds of developing breast cancer as well as ovarian cancer.

Since Mom wasn’t tested, we cannot be sure if this gene mutation was inherited through her or our dad. She was an only child, so there are no limbs on her family tree, nor on our father’s. We can only guess.

So now I had more research to do and big decisions to make. The FORCE national conference (see www.facingourrisk.org), which is the largest annual symposium for people affected by hereditary cancer, was a month away, so we signed up. FORCE stands for Facing Our Risk of Cancer Empowered.

FORCE is an organization that provides support, education, research and resources for survivors and people at increased risk of cancer due to an inherited mutation or family history of cancer, much of it BRCA-related. My sister and I traveled to their annual national conference. We attended a dozen seminars presented by medical experts, plastic surgeons, researchers, etc.  . . . and talked with others who were previvors or had been diagnosed with cancer to learn about options.

The good news was, at age 62, statistically it appeared I had outlived a good bit of my risk. I’d had yearly mammograms since I was 40 with no callbacks. Armed with a plethora of information knowing I was BRCA2, my plan was to monitor my breasts by alternating an MRI and a mammogram every six months, with very thorough self-exams each month as well.

With an increased risk for ovarian cancer,

I also planned to undergo a prophylactic oophorectomy (preventive removal of ovaries and fallopian tubes) to eliminate the risk of ovarian cancer, which typically shows very few symptoms until a later, less curable stage.

But life threw me a curve for which I am forever thankful. During a self-exam in the shower, all felt fine. Then I raised my arm and checked all the way up to my clavicle bone. I felt a very small lump. Or was it just my imagination?

The technician diligently worked to position me for a diagnostic mammogram, but the tumor showed up on only one of multiple images. If I hadn’t discovered that small lump first, the tumor may not have been discovered during my yearly screening. After viewing the ultrasound, my radiologist called it “a good catch.” I shudder to think that I could have blissfully been having mammograms, and this mass would have been just out of view. The biopsy and MRI revealed a stage 1, aggressive 1.3 cm tumor. There are many types of breast cancer. Mine was the most common type — progesterone and hormone positive, HER2 negative. My twin’s first cancer was this type.

One of my first appointments was with my oncologist, Dr. Ingrid Mayer. If I had not been BRCA2, I might have chosen a lumpectomy. But I did not want to have to monitor and worry about future mammogram results of the good breast, so I decided to have a double mastectomy.

I’d never been a hospital patient, so I was nervous but very confident in my Vanderbilt team. Seven weeks later, on Oct. 11, 2017, in a six-hour surgery, breast surgeon Dr. Mary Hooks removed the cancer and breast tissue, and plastic surgeon Dr. Galen Perdikis placed expanders to begin my reconstruction.  Because my tumor was far away from my nipples, I chose to keep them. My lymph nodes were clear, and my oncotype score came back low enough to indicate chemo would not increase my survival odds, so chemotherapy wasn’t recommended.

Randy stayed with me the first few days, helping me handle the four drains coming out of my body and making sure I ate and took my medication. She’s been through this not once, but twice, so she was very helpful in setting my expectations and knowing what to expect. I also found various Facebook groups helpful, with women just like me going through the same steps.

Pam Simmons, right, and her twin sister, Randy Bieniek, on the day of Pam’s surgery.

A breast cancer survivor friend went with me to most all my appointments to take notes and be my sounding board as I made decisions. She organized a meal sign-up and wrote a weekly newsletter to my friends. What an angel! My friends’ cards, flowers and visits meant more to me than I can ever express. When you are single, you feel a little more alone, but my friends made me feel loved and cared for. Cancer had positive benefits I would not have imagined.

Eventually the drains were removed, and I could shower again. I also was able to get a better night’s sleep. I had to remember my body had been through a lot and would take time to heal.

Six weeks later, I had my next surgery. Dr. Marta Crispens removed my ovaries and fallopian tubes. That was yet one more ticking time bomb I was able to halt in its tracks, thanks to genetic testing. Over the next few months, saline was pumped into my expanders to stretch my skin in preparation for silicone implants, and finally, on June 15, 2018, Dr. Perdikis completed my silicone implant exchange surgery. I’m now even more like my twin as we both have had our ovaries/fallopian tubes removed and breast reconstruction.

In many ways, my life has been enriched by cancer. I know many of you may find that hard to believe. I take private guitar lessons, something I’ve always wanted to do, at Gilda’s Club Middle Tennessee. Free of charge to everyone, Gilda’s Club offers a gathering place where people with cancer, as well as their families and friends, can join with others for social and emotional support. They offer approximately 60 support and networking groups and over 50 education workshops and lectures each month. I’m looking forward to taking a cooking class and have attended a lecture on osteoporosis. I am taking Letrozole, an estrogen blocker, so diminished bone density is a concern.

The YMCA offers a wonderful ABC Program (After Breast Cancer Program), where I met and bonded with breast cancer survivors through several weeks of exercise classes taught by Pink Ribbon® Certified Personal Trainers, plus nutrition classes and small group counseling. This valuable program was designed by survivors for survivors to provide healing for body, mind and spirit after a breast cancer diagnosis.

There are so many who have survived much harder trials and tribulations than me. I’m just one of many people I know who have experienced the hardships of cancer. Until you’ve gone through it, it is hard to fully understand the fear, uncertainty and overwhelming responsibility of trying to make the right decisions based on your personal situation.

I count my blessings every day that genetic testing put me on a path of heightened awareness, which likely saved my life. I discovered the deep loyalty and love of my friends. I’ve met so many strong women, excellent doctors and nurses and others who support breast and ovarian cancer awareness. Yes, breast cancer changed me. What I lost has been replaced with so much I have gained. Randy and I hopefully have more time to live our lives. And, as my sister says, “Live each day to the fullest and with purpose.”