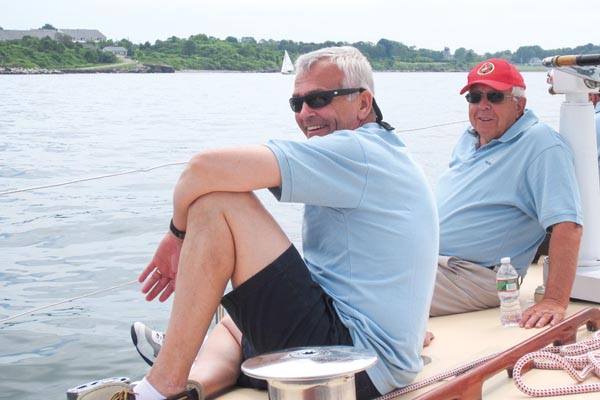 Terry Burke was going out on a limb. He planned to hire 30-year-old Curt Thorne for a senior-level position at Cigna.

“Son, I’m going to give you an opportunity of a lifetime, and if you make it, you’re going to make it big. And if you don’t, I’m going to fire your ass,” Burke told him.

Thirty years later, Thorne vividly recalls that meeting. It came at the end of a day of interviews. A big guy, Burke had sat partially hunched over his desk, appraising the younger man.

“On paper, I was not qualified for the job,” Thorne said. “But Terry very much listened to his own drummer and followed his own beliefs. He had seen something in me, and he thought I could be successful.”

Thorne and Burke met a year earlier in 1988 at Equicor, where Burke was a senior executive. Now, Cigna had acquired the company, and Burke wanted Thorne to start Cigna’s pharmacy benefits management company.

Thorne took the job. Over the next three decades, what started as a business relationship grew into a deep friendship. After Thorne moved on to run a series of different companies, he relied on Burke’s business acumen and advice, with Burke serving on the company boards.

“He was quite a mentor to me,” Thorne said.

When Burke died from bladder cancer in 2017, Thorne wanted to honor his mentor. He and his wife, Heather, joined by Burke’s wife, Sherry, launched the Terry Burke Fund for Bladder Cancer Research at Vanderbilt-Ingram Cancer Center. The Burke Fund is supporting a range of discovery research aimed at improving outcomes for bladder cancer patients, and it is helping train the next generation of bladder cancer physician-scientists.

“This fund is designed with Terry’s passions in mind,” Thorne said. “He loved being a mentor; he loved creating opportunities for people to get ahead. Supporting young doctors at the beginning of their careers would be right up his alley.

“And, as it relates to philanthropy, Terry advocated support of less popular causes where an outsized impact can be realized. Bladder cancer is just such a cause: when compared to the death rate caused by bladder cancer among all cancers, it has not attracted its share of funding and research. The Burke Fund could have a big impact for patients, which is humbling.”

Amy Luckenbaugh, MD, started a fellowship in Urologic Oncology in July as the first Terry Burke Fellow. She knows she’s a rarity.

“There aren’t very many female urologic oncologists,” Luckenbaugh said, explaining that historically most physicians have thought of urologic disease as prostate cancer.

“We treat all types of urologic cancers, and women are affected by bladder and kidney cancer. But it’s not common for female physicians to specialize in urologic oncology.” 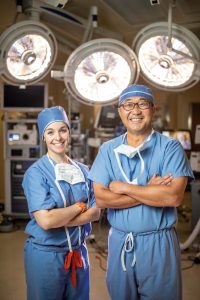 Luckenbaugh knew from the beginning of her five-year urology residency at the University of Michigan that she wanted to further specialize. She enjoyed doing surgery and taking care of patients, and she saw a special connection between urologic oncologists and their patients. In searching for the right fellowship opportunity, she focused on finding a place with strong surgical mentors and research expertise.

“Vanderbilt was my ideal place because it combined clinical and research strengths with excellent mentors. It’s a combination that’s difficult to find elsewhere,” Luckenbaugh said.

About 90 percent of patients with bladder cancer are older than 55; the average age at diagnosis is 73. Smoking is a primary risk factor.

Although bladder cancer is among the top 10 most common cancers, it remains underappreciated, said Kimryn Rathmell, MD, PhD, Cornelius Abernathy Craig Professor of Medicine and director of the Division of Hematology and Oncology.

“It’s not uncommon to have a patient say, ‘I didn’t even know that bladder cancer was a thing,’” Rathmell said. “It’s as common as kidney cancer and more common than pancreatic cancer.”

The time is right for efforts supported by the Burke Fund, Rathmell added.

“Because bladder cancer has been an under-the-radar sort of cancer, it has been slower to have the research attention and impactful changes that have improved patient care for other types of cancer. We have a real opportunity to take bladder cancer research to another level.”

One of the challenges for bladder cancer is in diagnosing the disease. Initial symptoms may include blood in the urine or changes in urination such as increased frequency or a burning sensation — symptoms that are like those for a urinary tract infection (UTI).

“A primary care physician might think a patient has a UTI and prescribe antibiotics, then the symptoms come back months later,” said David Penson, MD, Paul V. Hamilton, MD and Virginia E. Howd Professor of Urologic Oncology and chair of the Department of Urology. “Suddenly it takes six months to get diagnosed because everyone thinks it’s something else.”

Bladder cancer diagnosis currently requires a cystoscopy. In this procedure, a urologist inserts a thin tube with a light and camera through the urethra into the bladder (like a urinary catheter), fills the bladder with saline and examines the inner lining, taking tissue samples for testing.

About two in three bladder cancers are first diagnosed while the cancer is confined to the inner layer of the bladder and has not yet invaded the deeper muscle layers. These non-invasive cancers are removed by “scraping” away the tumor during a cystoscopy procedure. Bladder cancer often returns, however, so patients need to be followed with cystoscopies.

“Once you’re diagnosed, you have surveillance cystoscopies every three to six months,” Luckenbaugh said. “The frequency of those can be intrusive for patients.”

The Vanderbilt team is searching for urinary markers to diagnose and follow bladder cancer.

“We would love it — as would all investigators looking for biomarkers — if you could give us a urine sample, and we could say yes or no, you have bladder cancer or you don’t,” said Sam Chang, MD, MBA, Patricia and Rodes Hart Professor of Urologic Surgery and an internationally renowned bladder cancer surgeon and investigator. Chang directs the Urologic Oncology fellowship program and is Luckenbaugh’s primary mentor.

The group is collecting urine samples from patients undergoing cystoscopies for diagnosis, tumor removal and surveillance. They are examining a panel of five different potential biomarkers in the samples and then combining the information with the clinical findings to develop a predictive model.

“And any way that we can make it easier on patients and help them avoid repeat cystoscopies, that’s a winner.”

During 2017, five immunotherapies — medications designed to harness the patient’s own immune system to fight cancer — were approved to treat locally advanced or metastatic bladder cancer.

“It was the first time in decades that anything had been approved for advanced bladder cancer,” Chang said.

“We need to know how to use these therapies most effectively: how do we use them in combination; what should come first; when should they be used,” Rathmell said. “We want to be part of answering these questions and bringing these new therapies to this patient population.”

With support from the Burke Fund, the investigators are exploring how immunotherapies might be used to treat cancers that are still localized to the bladder. Working with Austin Kirschner, MD, PhD, assistant professor of Radiation Oncology, they have developed a mouse model of bladder cancer that they will treat in a way that’s unique to the bladder — by instilling the immunotherapy into the bladder.

“We want to use these medicines earlier and avoid systemic side effects by putting them directly into the bladder,” Chang said. “Will it work? We don’t know, but we think it has a good chance of working, and we hope to move quickly from animal to human studies.”

Despite the successes of immunotherapies, however, they don’t work for every patient. Katy Beckermann, MD, PhD, instructor of Medicine, has compiled a database of patients who are responders and non-responders.

“Once you have a significant population of patients, you can dive in and ask what’s different about these people, their tumor or their experience,” Rathmell said. “We’re now at that place.”

Beckermann will also be characterizing the immune cells present in freshly isolated bladder cancer tissue samples and testing them functionally.

The team is also testing an unconventional immune therapy: reovirus, an “oncolytic virus” that causes little or no human disease and preferentially kills cancer cells.

“We know it kills bladder cancer cells in culture, and now we’re moving into our animal models,” Chang said. “The Burke Fund has been used to launch multiple projects that could not have been started without this funding.”

Terry Burke was 74 when he noticed occasional blood in his urine. His physician said he had an infection and prescribed antibiotics, but six months elapsed before he was examined by cystoscopy.

“They saw lots of tumors inside the bladder,” said his wife of 47 years, Sherry Burke. “The diagnosis came out of nowhere. I think if we’d had some knowledge about bladder cancer, we would have known what questions to be asking.”

Terry Burke had several months of chemotherapy, followed by removal of the entire bladder (cystectomy). The cancer had already metastasized, and he died about three months later.

“Early detection would have made such a difference to him,” Burke said.

Terry Burke was a decorated Marine captain who earned a Bronze Star Medal during his service in Vietnam. After leaving the service, he had a successful career in business. He played competitive tennis, raced sailboats, and in his retirement taught classes at a local community college.

“He was a wonderful man, an accomplished man,” his wife said.

Thorne thinks that Terry Burke would be proud of what Vanderbilt physician scientists are doing in his name.

“Vanderbilt-Ingram has a deep commitment to the mission above the other things that get in the way, and Terry was very mission-driven,” said Thorne, who serves on the Cancer Center’s Board of Overseers. “It would be wonderful if the Burke Fund contributes to advances that give a lot more bladder cancer patients a fighting chance.”