The 20-year-old sophomore at Rochester Institute of Technology (RIT) said whipping up the goodies was a small act of gratitude for the health care team that was instrumental in saving his life.

“I wasn’t the easiest patient, so it’s an atonement for my sins,” the witty young man said.

In the Fall of 2016, Moses was excited about starting college, attending his freshman orientation in Rochester, New York. The milestone was unexpectedly detoured by a diagnosis of Ewing sarcoma and the beginning of a fight for his life.

“This is an extremely rare cancer, occurring in approximately 500 children, teenagers and young adults under the age of 20 every year,” said Borinstein, the Scott and Tracie Hamilton Professor of Cancer Survivorship. “The average age of patients diagnosed with this disease is 15, so it most often occurs in teenagers like Will Mason.”

When Moses was in his senior high year at the University School of Nashville, he began to experience pain in his right leg. He chalked it up to kicks he’d sustained during his taekwondo classes, but when the pain persisted, he went to a walk-in clinic for treatment. Although X-rays did not reveal the cause of the pain, a suspected possible torn ligament was the diagnosis. Over the summer, the pain intensified consistently, and it was becoming apparent that there was a more serious issue as his ability to walk became impaired.

“It is common that patients think they just hurt themselves playing sports or other activities,” Borinstein said. “Also, the pain often is intermittent at first and gets better with rest or anti-inflammatories. However, eventually the pain worsens, which brings them to medical attention. Patients often have symptoms for six to 12 months before they go see a doctor.”

After summer vacation, about a week before Moses was scheduled to fly to Rochester for his freshman year of college, he went to Vanderbilt Orthopaedics and saw Gene Hannah, MD, who ordered an MRI on his right leg and knee.

“I wasn’t expecting a response until the following week. Needless to say, I was surprised when I received a call from him while loading my stuff into the back of my (maternal) grandfather’s plane,” Moses said. “Dr. Hannah impressed upon me the importance of seeing a doctor the moment I landed in Rochester.”

Two days later, Moses was with a pediatric orthopaedic specialist in Rochester looking at an image of his leg. A fuzzy patch the size of an egg was visible below his knee, and while Moses said he didn’t know exactly what it was, he knew it couldn’t be good.

A biopsy was ordered, and Moses continued moving into his dorm room and preparing to attend freshman orientation. By the end of that week, he was lying on a surgical table undergoing a biopsy.

“I woke up some time later in the anesthesia recovery unit, with my father sitting next to me,” Moses said. “The doctor walked in a short time later and explained to me that they had found small round blue cells in my biopsy, an indicator of a malignant tumor.”

The effects of the anesthesia had not worn off completely, so the diagnosis seemed surreal.

“The doctor explained that while they knew that the tumor was malignant, they did not know what kind of tumor it was yet. She explained that they would have to run some tests and that it would take several days to get done.”

Moses and his father, Tim, were determined to remain positive and turned to Moses’ paternal grandfather, Hal Moses, MD, a world-renowned cancer researcher and the founding director of the Vanderbilt-Ingram Cancer Center (VICC), for support.

“Upon hearing this news, my grandfather replied, ‘I’ll take care of it,’ and hung up,” Moses said. “To this day, I don’t know what he did, but the next day, I was standing in my freshly minted dorm room, staring out the window, when my phone rang. It was the doctor, informing me that the test results had shown that the tumor was Ewing sarcoma, a rare and aggressive form of bone cancer.”

Hal Moses, professor emeritus of Cancer Biology, said he had no direct hand in his grandson’s care, but reached out to Ginger Holt, MD, director of Musculoskeletal Oncology at VICC, who coordinated with doctors in Rochester to review the MRI. He encouraged his son, Tim, to bring Will back to Nashville for treatment at Monroe Carell Jr. Children’s Hospital at Vanderbilt.

“I was happy he was here. It was necessary. He required a lot of support,” Hal Moses said. “I had a lot of faith, and I could think of no other place for him to be. I was very pleased with the outcome.”

Moses packed immediately, and within hours his first semester at RIT ended before it started. He flew back to Nashville to take care of his health. At the end of the night, he and his friends contemplated life over milkshakes.

“By 5 p.m., I was off of RIT’s campus with a promise of guaranteed admission and matched financial aid when I returned to school. By 7 p.m., I was loading my stuff back into the plane,” Moses said. “By midnight, I was back on the ground (in Nashville), and by 2 a.m. Saturday, the next day, I was sitting in a Cook Out restaurant with two of my best friends drinking milkshakes and contemplating the events of the previous 24 hours. I’ve always had the outlook that worrying about it wouldn’t solve it. I told myself ‘don’t worry.’ Worrying wouldn’t put me in remission.”

All in the family

What should have been his first week as a college freshman became his first week of undergoing chemotherapy treatments. Moses received intensive chemotherapy and surgery to remove the tumor in his leg and to prevent the cancer from spreading to other parts of the body.

“Without chemotherapy, Ewing sarcoma recurs about 80 to 90 percent of the time,” Borinstein said. “He received 14 cycles of intensive chemotherapy composed of five different drugs and had his tumor removed midway through his treatment. He had an artificial knee replacement performed by Dr. Holt when the tumor was removed, and he required physical therapy after the procedure to help strengthen his leg and improve his ability to walk.”

The surgery Holt performed was extensive.

“After the start of his chemotherapy, I removed the cancerous bone in his leg and replaced it with a metal prosthesis which included moving muscle and skin flaps around in the leg,” Holt said. “I will continue to follow him for life, for cancer surveillance and to follow the ‘bionic’ knee.”

“He is a great young man. He is intelligent and already well educated, so he asked a lot of good questions and kept us on our toes,” Holt said. “I am thankful that Hal Moses has dedicated a large part of his career to Vanderbilt-Ingram, and that when he needed us to help his family, we could. Will and his family have been very generous in sharing their father and grandfather with us here at Vanderbilt and raising money for donations to the pediatric cancer fund. We will always be grateful and humbled.” 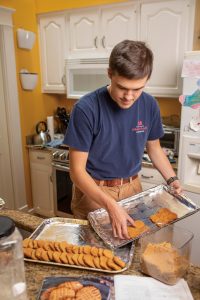 Will Mason Moses puts cookies on a tray and delivers them still warm from the oven to the nurses who cared for him. Photo by John Russell.

During this time, Moses said his life became a routine of treatments and hospitalizations that he endured with the support of his family, friends and the staff at Children’s Hospital.

“It was easy for me; all I did was lie in a bed and not die. The oncology team and my grandfather, my family — they did all the work,” he said. “It wasn’t the best experience, but I got lucky. I live in a city with a great oncology team. The support of my grandfather, who works in cancer research, and my grandmother, Grammy (Linda Moses), who made sure I was at each appointment, made this experience bearable.

“She was in the room writing and taking detailed notes. She showed up early with homemade pumpkin bread and a fresh smoothie for my appointments. I had unbelievable support. My Grammy is an absolute saint. She is the perfect grandmother.”

The oldest of seven children, Moses said his parents, Tim Moses and Patricia Drake, and his six siblings were also there for him.

“My parents kept a roof over my head and they frequently would drive me to and from appointments. I don’t think I ever spent a night alone,” he said. “Someone was always there with me. Despite everything that happened, my parents made sure the other six siblings got to school and the house kept running despite the added difficulties.”

Moses’ hair fell out, and he lost weight and grew pale and weak throughout his treatment and recovery. He spent time in a full leg cast, in a wheelchair and on a cane as he healed.

“My aunt and grandmother on my mother’s side would drive over two hours to stay with me for a night or two as often and as long as they could,” Moses said. “Neighbors and parents from Linden Waldorf, the school I had attended as a child, delivered food for me and my family, and my friends ensured that just because most of 2016 was terrible, that my New Year’s Eve was not by coming over and celebrating both the end of the year and the midway point in my treatment. The sheer amount of support I had from friends, family, people known and unknown was, and still is, incredibly heartwarming.”

Nine months after his diagnosis, on May 27, 2017, Moses personally pulled the needle out of his port and finished his final chemotherapy treatment. “I walked out of the sixth floor as the nurses cheered for me,” he said.

Those who watched him fight are happy he’s remained in remission.

“I was impressed with the maturity he showed going through his battle with cancer, which wasn’t easy,” Hal Moses said. “He was very, very brave throughout the whole thing. I’m delighted with the quality of care he received here at Vanderbilt.”

In fall 2017, Moses returned to Rochester Institute and again began his first year of college as a freshman and as a cancer survivor. Despite all he’d been through, he never disclosed he had fought Ewing sarcoma. He didn’t want any pity.

“During the summer after treatment, I quickly discovered that the true story behind the scar on my leg was a bit of a mood-killer, so when I was asked about the scar at college, I said it was due to a bar fight in Cuba, where a man pulled a machete on me,” he said. “They believed it, and I’m not the cancer guy.”

Grateful to be in remission, he expressed his appreciation over the summer by delivering cookies and other goodies to the nurses who cared for him.

“I had a snarky, sarcastic attitude (in the hospital). That’s for sure,” he said. “The nurses knew something was wrong when I wasn’t bantering with them. It truly was the support network that dragged me through this. The pediatric oncology team kept me alive for nine months. I wanted to give something back for their generosity.”