Carlos Arteaga, M.D., professor of Medicine and Cancer Biology at Vanderbilt, has been elected president-elect of the American Association for Cancer Research for 2013-2014.

Elected by the organization’s members, Arteaga will work with the AACR board of directors and the 34,000-plus membership to further the AACR’s mission to prevent and cure cancer through research, education, communication and collaboration. 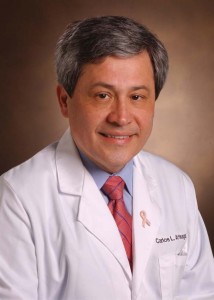 He officially became president-elect April 9 at the AACR Annual Meeting in Washington, D.C., and will assume the presidency in April 2014.

“This incredible honor is testament to the impact of Dr. Arteaga’s research and leadership on the cancer research community worldwide,” said Jennifer Pietenpol, Ph.D., director of Vanderbilt-Ingram Cancer Center (VICC). “Through his work at Vanderbilt-Ingram, his contributions to numerous national committees and his leadership, Carlos stimulates impactful research and collaboration that is changing the face of oncology.”

Arteaga was also an editorial board member of Clinical Cancer Research from 2001 to 2004 and is currently deputy editor. Since 2008, he has served on behalf of the AACR as co-chair of the annual CTRC–AACR San Antonio Breast Cancer Symposium and is a principal investigator on the Stand Up To Cancer Dream Team, “Targeting the PI3K Pathways in Women’s Cancers.”

“This is a wonderful honor and I am very grateful to receive this recognition for my career as a cancer researcher,” said Moses, who is the Hortense B. Ingram Professor of Cancer Research. “It is especially meaningful to receive this award from an organization which I was honored to lead as president.” 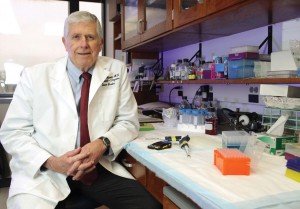 Moses has also been named to the first class of the Fellows of the American Association for Cancer Research Academy.

The AACR Academy was created to recognize and honor distinguished scientists whose major contributions have spurred significant innovation and progress against cancer. The fellows were selected through a rigorous peer review process that evaluates individuals on the basis of their scientific achievements in cancer research. Moses is one of 106 scientists elected to the inaugural class of AACR Fellows, symbolizing the 106-year history of the organization.

Moses was the founding director of what is now VICC, and for 20 years, has also served as director of the Frances Williams Preston Laboratories at VICC, founded with support from the T.J. Martell Foundation. Within these laboratories Moses has led teams of cancer researchers who have focused on the molecular activity inside cells which can lead to the development of cancer. Much of his research has been related to cellular activity and growth in breast cancer, and the crucial discoveries from his research team have served as building blocks for other cancer scientists.

Moses has also served as a mentor for scores of students and postdoctoral fellows who are now prominent scientists and thought-leaders in cancer research. He is a highly acclaimed international lecturer and has served in numerous leadership roles in the cancer research community, including president of the Association of American Cancer Institutes (AACI), co-chair of the National Cancer Institute (NCI) Progress Review Group and chair of the NCI Cancer Centers review panel. He is a member of the Institute of Medicine (IOM) of the National Academies and was founding chair of the IOM’s National Cancer Policy Forum.

Nearly every week since 1988, cancer patients and families visiting Vanderbilt University Medical Center have been able to count on a comforting routine—at least one morning per week they are greeted by the same smiling volunteer who dispenses a dose of friendship along with coffee, snacks and advice about how to navigate the sprawling Medical Center campus. 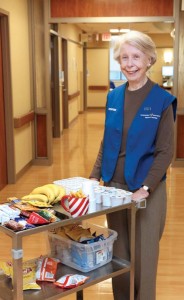 Margaret “Peggy” Henry Joyce marks 25 years as a volunteer for the Cancer Center this year, making her one of the longest-serving and best-loved individuals who donates time to assist Vanderbilt-Ingram Cancer Center patients and families.

“People who come into the cancer clinic have been diagnosed with cancer, which is a scary thing, and anything that you can do to make it more personal for the patients is important,” Joyce said.

A Nashville native and Vanderbilt University graduate, Joyce has been a fixture at VUMC since her husband’s diagnosis of T-cell lymphoma 1980. He underwent several different therapy regimens at VUMC, but each time the cancer would return and eventually he underwent a bone marrow transplant. Despite the intensive treatments, he succumbed to cancer in the spring of 1981.

“In spite of the difficulties of that year, it gave Harry and me a year that we wouldn’t have had and that was important. That’s what I tried to communicate to the doctors,” Peggy Joyce remembers.

She also remembers the dark, cramped offices in VUMC’s Medical Center North where cancer patients were treated at the time.

“There was the nicest, most wonderful group of people—everyone from the receptionist to the cleaning people were super wonderful. It made you want to do something to help them have a more attractive place to work.”

In memory of Harry Joyce and in tribute to the medical professionals who cared for him, Peggy Joyce, along with her mother, Kathryn Craig Henry, made a gift for the creation of a new cancer clinic at Vanderbilt— the Henry-Joyce Cancer Clinic.

In 1993, Vanderbilt officials and community leaders broke ground for an official cancer center and Joyce was one of those wielding a shovel. Over the years she and her family have continued to provide financial support for what is now VICC. She also became one of the founding members of the Cancer Center’s Board of Overseers.

Hal Moses, M.D., the first director of the Cancer Center, remembers Joyce’s contributions as a leader and adviser.

“Any cancer center really needs community volunteers and Peggy was very free with her time, advice and support throughout the whole process,” said Moses, who is now Director Emeritus of VICC.

Today, she keeps coffee pots filled in the Cancer Center waiting rooms, delivers warm blankets to patients undergoing therapy and drops by to chat with patients or family members.

While she downplays her role as a longtime volunteer, Moses said Joyce knows how the clinic is supposed to operate and she serves as an advocate for the staff and the patients.

Joyce maintains she’s the one reaping the biggest reward.

“You meet the most wonderful people; one patient had escaped from behind the Iron Curtain. There are just interesting people with interesting stories. I enjoy doing it and I feel like it helps.”

Most cancers are sporadic, which means that physicians don’t have enough clues to determine what caused an individual’s disease. To help answer that question and prevent future cancer cases, Vanderbilt University will serve as a host site for a nationwide cancer prevention study sponsored by the American Cancer Society (ACS).

The Cancer Prevention Study-3 (CPS-3) started in 2006 with a goal to enroll 300,000 men and women from diverse racial and ethnic backgrounds in the United States. This is the third nationwide population study launched by the ACS, and enrollment was held in April.

Participants will be followed for 20-30 years. Every few years, they will be contacted by researchers to update information about medical, lifestyle and behavioral issues.

The goal of the CPS-3 study is to examine a wide spectrum of lifestyle, behavioral, environmental and genetic risk factors linked to cancer risk and death. The prevention study will expand scientists’ knowledge of cancer risk factors in diverse populations, improve understanding of cancer biology and improve disease prediction.

Beneath the nature-themed walls in room 6742 on the sixth floor of the expansion space at Monroe Carell Jr. Children’s Hospital at Vanderbilt is a surprise: 27,000 pounds of lead bricks that fully encase the room.

This lead-lined room is a unique feature of the expansion space that is used for a pioneering targeted radiation therapy for patients with neuroblastoma, a malignant tumor that develops from nerve tissue, and other cancers. 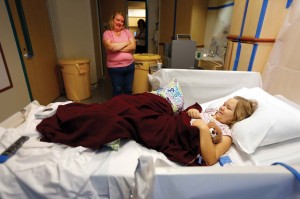 Melissa Smith visits with her daughter, Madison Monday, who was the first patient to be treated with meta-iodobenzylguanidine (MIBG), an antibody, in the new lead-lined room at the Monroe Carell Jr. Children’s Hospital at Vanderbilt. Photo by Joe Howell

Fewer than 10 lead rooms exist in the United States, and about six of them are at children’s hospitals.

“It’s really a unique service for a population of patients that is terribly high risk; primarily for patients with neuroblastoma,” said Haydar Frangoul, M.D., Carolyn Perot Rathjen Professor of Pediatrics and director of the Pediatric Blood and Marrow Transplant Program. “Because the radiation is very high, the patient needs to be isolated to protect not only the caregivers but everyone in the rest of the hospital.”

The room is fully encased in 27,000 pounds of lead shielding created from reclaimed firing range bullets. It’s enough lead to stretch the length of 42 football fields and to make 150,000 toy soldiers, and it prevents radiation from leaking out of the room.

Inside the room, the young patients receive an intravenous dose of a meta-iodobenzylguanidine (MIBG), an antibody that is tagged to radioactive iodine. Administration of the drug takes an hour and a half, but the child is radioactive for about four days and remains in the room during that time with limited contact.

During the child’s stay, the room is lined with plastic sheeting to make cleanup of radioactive, hazardous materials easier. Any personal items that enter the room must be thrown away at the end of treatment.

Parents act as the primary caregivers, outfitted in hospital clothing to help protect against too much radiation. The parents stay in an anteroom for protection from radiation and have two-way cameras so they can interact with the child.

Nurses go in only briefly to avoid overexposure from caring for multiple patients. They follow a basic time/distance/shielding safety protocol and have extensive training on the therapy and room.

The unit meets Centers for Disease Control and Prevention guidelines for a protective area for immunosuppressed patients. It is a positive pressure environment, which means air will flow out of the unit instead of in, preventing airborne microorganisms from infecting patients.

The new floor has much the same layout and finishes as existing Critical Care Tower units, and the emphasis on patient- and family-centered care is especially important for this population.

Caregivers have access to showers and laundry facilities, and there is a dedicated family zone in each of the patient rooms.

All rooms are private and average 320 square feet. In addition to the family zone, there are staff and patient zones. The staff zone provides plenty of space for caregivers to work around the bedside, and there is a computer in every room for documentation. The patient zone has the latest technology and safety measures.

The unit’s layout has been customized for the hematology/oncology population. The waiting area has been moved within the unit so patients can visit with friends and family inside the positive pressure environment.

A rehabilitation room has been created, with a recumbent bicycle, elliptical machine and ballet barre.

The space on 11 North vacated by the opening of the new myelosuppression unit has been refurbished and reopened as a 27-bed hematology/oncology unit for patients who do not need a positive pressure environment.