Vanderbilt-Ingram Cancer Center’s Breast Specialized Program of Research Excellence (SPORE) has been awarded a third round of funding from the National Cancer Institute (NCI). The SPORE grant renewal will provide more than $11.3 million in funding support over the next five years for breast cancer research.

“It is becoming uncommon for a cancer center to receive three straight rounds of funding for a SPORE program, so we are delighted and gratified by this award,” said Carlos L. Arteaga, M.D., Donna S. Hall Professor of Breast Cancer Research and director of the Breast Cancer Program and the Breast SPORE at VICC.

“The SPORE grants are rigorously evaluated and scored by a peer-review process of NCI. We are proud that investigators from peer institutions recognized our breast research program for excellence and approved another five-year award.”

The NCI—a division of the National Institutes of Health—created the SPORE program in 1992 to support translational research that is designed to move knowledge from the laboratory to the clinic and/or back to the laboratory. During the previous 10 years of SPORE awards, VICC’s breast research program has received more than $23.6 million through this federal grant initiative. The VICC investigators have been highly productive, publishing numerous research papers in high-impact journals and advancing scientific knowledge that has contributed to progress in breast cancer.

VICC’s breast cancer investigators decided to focus on four areas of interest supported by the new round of funding:

“We are so pleased that the NCI has recognized this multidisciplinary team of investigators conducting basic, clinical and population-based research in breast cancer,” said Jennifer Pietenpol, Ph.D., director of VICC and B.F. Byrd Jr. Professor of Oncology.

“In addition to our basic science and clinical investigators, this research effort also includes invaluable contributions from our partners in the Pathology and Tissue, Informatics, Biostatistics, and Imaging Shared Resources at Vanderbilt.”

Each of the SPORE projects also includes a patient advocate who ensures that the patient perspective is included in the research protocol.

The director of the National Cancer Institute, Harold Varmus, M.D., told an overflow crowd at November’s Orrin Ingram Distinguished Lecture, part of the Flexner Discovery series, that he is concerned about the climate for discovery research in the United States.

“The needle has in my view, under conditions of fiscal strain, swung too far in the direction of application of what we know, without leaving enough room for people … to think about the deep mysteries of biology and medicine,” he said. 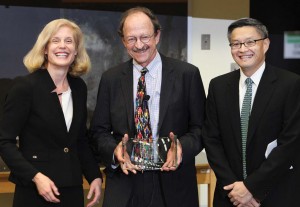 Varmus described the state of U.S. science that he entered as a young investigator around 1970, emphasizing the elements that supported discovery science and sharing “what resulted from that more open, less anxiety-ridden environment,” he said.

Those results included the series of studies demonstrating that retroviral oncogenes (cancer-causing genes in viruses) are mutated cellular genes that normally regulate cell growth and development. Varmus and J. Michael Bishop, M.D., received the 1989 Nobel Prize in Physiology or Medicine for these discoveries.

As NCI director, Varmus said he wants to foster an environment of the kind he experienced earlier in his career.

“How do I ensure a role for unfettered discovery without clear objectives?”

Varmus outlined strategies being pursued by the NCI to preserve and enhance discovery. These include:

“We’re fighting a battle against cancer for which we have some remarkable new tools. But if we don’t do the basic work required to make more effective weapons than those we currently have, if we just invest in applying the knowledge we have accumulated over the last decades, we’re going to have disappointed the public of the next century … and not had the experience in science that I think is so extraordinarily valuable for our species,” Varmus said.

“There are over 600 people in the family now, but we’re keen on maintaining those philosophies. It’s still a family-owned company and we hope to keep it that way,” he said.

Those values also easily apply to Bacardi himself, as he and his wife Leslie have given generously toward curing cancer and caring for patients, most recently establishing the Caridad Bolivar Bacardi Research and Fellowship Training Fund in the Department of Otolaryngology in honor of his mother.

“I’m hoping for a light at the end of the tunnel. A bit of progress in the realm of eradication of cancer. Although cancer is a chameleon, I’m afraid. As soon as we figure something out, something else changes. But I wanted to establish some sort of platform to help people through it,” he said.

Bacardi, a resident of Nassau in the Bahamas, learned about Vanderbilt’s work in head and neck cancer through Ron Eavey, M.D., Guy M. Maness Professor and chair of Otolaryngology. They first met at Massachusetts Eye and Ear Infirmary, where Eavey was a resident while Bacardi had sinus surgery.

“He took all the gauze out of my sinuses after surgery. He must have pulled out a mile of the stuff. We bonded over that experience and developed a strong relationship over the years,” Bacardi said. “He helped us establish a fund at Mass Eye and Ear, and later when he suggested something at Vanderbilt, I readily agreed.”

Eavey said the Bacardi gift is critical given today’s federal funding climate and its flexibility for both research and training purposes has already been fruitful.

Graduate student Liz Simonik received support from the Bacardi fund when another grant ended, and has been able to continue what Eavey calls, “fascinating research.” Simonik has used the Head and Neck Cancer Biorepository to investigate a gene implicated in childhood leukemia that is also present in over half of head and neck cancers.

“Because of the goodness of Jorge’s heart, Liz can continue her research and these unknown patients are being cared about, and some will even be cured,” Eavey said.

Sosman named one of ‘hottest’ researchers in U.S.

Jeffrey Sosman, M.D., professor of Medicine, Ingram Professor of Cancer Research and director of the Vanderbilt Melanoma Program, was named one of the Hottest Scientific Researchers of the last year by Thomson Reuters Science Watch.

The annual ranking recognizes researchers whose published papers recorded notably higher levels of citations during the previous year. Sosman is among nearly two dozen researchers cited by Thomson Reuters, a news and information company that specializes in business information across a wide range of industries. He has been the lead author or co-author on several recent papers on melanoma, the most deadly form of skin cancer.

Sosman has also been picked to head one of two teams of researchers at prominent national institutions investigating acral melanoma, a skin cancer that typically forms on the hands, soles of the feet or under the fingernails. The two Team Science Awards are funded through a $1 million grant jointly awarded by the Melanoma Research Alliance (MRA) and the Hidary Foundation.

Sosman will lead a team of researchers at Vanderbilt, along with colleagues from Memorial Sloan-Kettering Cancer Center, New York, and the nonprofit Translational Genomics Research Institute (TGen), Phoenix. Using new technologies like genomic sequencing, the studies will investigate the genetic changes that drive the development and growth of acral melanoma.

In addition to his leadership of the Vanderbilt Melanoma Program, Sosman is the first American Cancer Society Mary Hendrickson-Johnson Melanoma Professor for his efforts to bring translational medicine to melanoma therapy. He has directed numerous clinical research trials studying non-chemotherapy based treatment of cancer. The trials include a strong translational component frequently centered on immunotherapy, and more recently, targeted therapy aimed at mutated or overexpressed oncogenes.

At Vanderbilt-Ingram Cancer Center, Sosman directs one of the first programs in the nation to offer melanoma patients routine genotyping of their tumors to help identify and offer treatments based on their genetic mutations. More recently his efforts have turned to personalized therapy of melanoma with well-defined targets (BRAF V600, NRAS mutations, KIT mutations).

“We are finally seeing a paradigm shift in the treatment of melanoma and we are beginning to understand what is happening in the tumors at the molecular level,” Sosman said. “It is very exciting to finally be able to offer our patients new therapies that may extend their lives, even as we try to understand what the melanoma does to prevent these therapies from providing a cure.”

Harold “Hal” Moses, the Ingram Professor of Cancer Research at Vanderbilt University, is the recipient of the 2014 Distinguished Alumni Award—the highest honor for a member of the Vanderbilt alumni community. Moses is a highly acclaimed international lecturer and world-renowned scholar in the field of cancer biology. He is a 1962 graduate of Vanderbilt University School of Medicine.

Established in 1996 by Vanderbilt’s Alumni Association, the award recognizes an alumnus/alumna whose accomplishments and contributions have had the broadest impact and most positive effect on humankind. Recipients of the Distinguished Alumni Award are celebrated for going beyond their successful vocation and bringing benefit to the universal community. 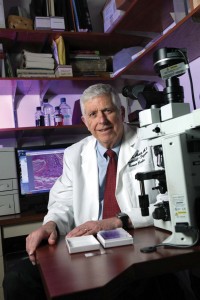 Much of Moses’s research career has been related to cellular activity and growth in breast cancer and the crucial discoveries from his research team have served as building blocks for other cancer scientists. His achievements have also been recognized with the 2013 American Association of Cancer Research Award for Lifetime Achievement in Cancer Research, the Earl Sutherland Prize for Achievement in Research at Vanderbilt and the T.J. Martell Foundation Lifetime Achievement Medical Research Award.

He is currently a professor of Medicine and Pathology, acting chair of Cancer Biology and director emeritus of the Vanderbilt-Ingram Cancer Center (VICC), where he was the founding director. He is also the founding and current director of the Frances Williams Preston Laboratories at VICC.

Moses will officially receive the award during a ceremony in 2014. 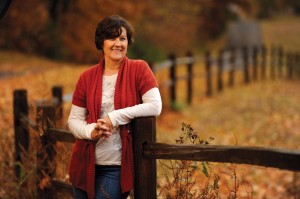 A native of Fairmount, Ind., Monroe earned a nursing degree from Western Kentucky University and work as a registered nurse. She was diagnosed with Stage IV lung cancer in September 2001 at age 42.

In order to ensure the development of new therapies, Monroe became a pioneering patient advocate with the National Cancer Institute’s Lung SPORE (Specialized Programs of Research Excellence) at VICC. She was also featured in Momentum Fall/Winter 2010 in an article about the smoking stigma associated with lung cancer. Monroe quit smoking when she was 28.

In 2007, Monroe joined with Kim Norris and David Sturges to found the Lung Cancer Foundation of America. LCFA’s mission is the dramatic improvement in survivorship of lung cancer patients through the funding of transformative science, with the ultimate goal of curing the disease.