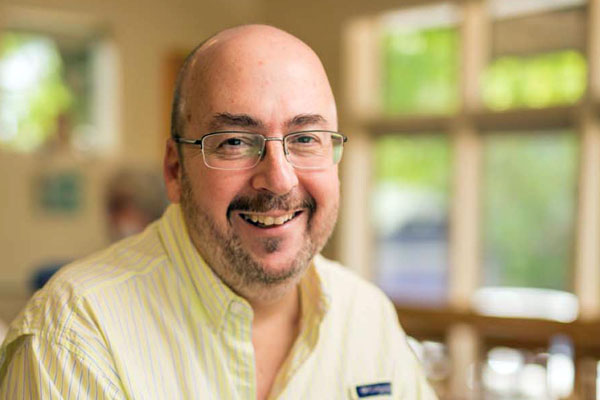 Moments after becoming the first patient in Tennessee to undergo the most recent FDA-approved therapy for the treatment of B-cell­ non-Hodgkin lymphoma, Dan Einstein, an admitted planner, knew he was in uncharted territory.

But he was at peace.

“There is no script,” he said. “We are sort of writing this as we go, and in this situation you really have to live in the moment, be in the moment and take it as it comes.”

After four years of battling an aggressive form of cancer, he agreed to undergo a new form type of immunotherapy—one that uses a patient’s own re-engineered immune cells to treat malignancies by stimulating the immune system.

“Just after the cells had been put back into my body, my oncologist sat with me and he said ‘this is a quantum leap for cancer treatment,’” said Einstein. “It was an overwhelming statement to hear, but it was absolutely true.

“From a patient perspective, when I looked at all of the faces of the people in the room, they were as shocked as anyone that this treatment was finally a reality. Cancer treatments are finally turning the corner. Yes, there is still much to do, but after so many years of research, (scientists) are finally hitting on some really amazing breakthroughs.

“I wanted to be a part of it for selfish reasons,” he admitted. “But also for the people down the line … I still remember it. That first call saying ‘it’s cancer’—it’s a lot to absorb and it’s a fast-moving train.

“The initial diagnosis hits you like a ton of bricks. I hope this lessens that weight.”

Immunotherapy is being hailed as the fifth pillar in cancer treatment following surgery, chemotherapy, radiation therapy and targeted therapies.

Einstein received CAR-T immunotherapy. His T cells were collected and then sent to a special facility where they were re-engineered to produce receptors on their surface called chimeric antigen receptors (CARs). These CAR proteins enable the T cells to recognize a specific protein on tumor cells. While the cells are being re-engineered, the patient receives intensive chemotherapy to suppress the immune system, so that when the cells are infused, they can quickly multiply, circulate throughout the body and attack targeted tumor cells causing them to die.

This newest tool in cancer treatment shows how powerful the immune system can be and how involved it is in a wide variety of diseases, in this case enabling the patient’s immune system to recognize and attack tumors very similar to how the body’s immune system fights viral and bacterial infections.

Immunotherapy is undergoing a massive transition, said Jeff Rathmell, Ph.D., professor of Pathology, Microbiology and Immunology and the director of the new Center for Immunobiology at Vanderbilt.

How do immunotherapies work?

The Center for Immunobiology’s goal is to support basic immunology science, which spans across different fields and diseases. It will serve as a bridge, connecting basic scientists with clinicians, said Rathmell, Cornelius Vanderbilt Chair in Immunobiology.

“We are not going to be doing things in isolation,” he said. “The whole point of the center is that it forms a mechanism to connect the basic science immunologists to these disease-targeted areas, to other scientists across the School of Medicine and to the University as a whole.

“The strength of the Center is that there are a lot of applications for immunology outside of this department. Now that science has learned more about the immune system’s interaction with cancer and the role the system plays in keeping you healthy, it’s become more important that we make these connections.”

For the Center to reach its full potential, it is imperative that researchers across the disease spectrum communicate and share ideas.

“With the immune system, it is the hope that once you train it to fight a disease, it will continue … The bottom line is that it can cure diseases in a way that your own body is doing the work,” he said.

The word about immunotherapy is spreading. Patients are routinely asking providers about the availability of the multiple agents approved by the FDA for use in melanoma, non-Hodgkin lymphoma and kidney cancer.

It will be a game changer, said W. Kimryn Rathmell, M.D., Ph.D., Cornelius Abernathy Craig Professor, professor of Medicine and Cancer Biology and director of the Division of Hematology/Oncology.

“The real exciting thing about immunotherapy is that it is happening across the board,” she said. “Up until now, when we would have these bursts of excitement in the field it would be in a particular area. But this—everyone is buzzing about it.”

Kimryn Rathmell’s clinical interest is in kidney cancer, which had its first FDA-approved immunotherapy drug released in the fall of 2015. The breakthrough is quickly changing the practice plan, she said.

Previously, patients would move from one antiangiogenic therapy to another to find the right fit. Now, with the widespread availability of nivolumab, a new protein immunotherapy drug, the possibility of long, durable response is a reality.

“This is a heyday for immunology, for sure,” said Kimryn Rathmell. “The word cure has been on the tip of our tongues before in different diseases that we can cure with chemotherapy, but this is really new territory where we are optimistic that these durable remissions or responses could last that long.

“We are all so hesitant to say the word cure,” she said pausing. “But we are seeing these therapies affect cancers in a way that we had not previously had a lot of hope for.”

Ershal Harrison of Lexington, Kentucky, is such a patient. First diagnosed with melanoma in 2003, Harrison experienced recurrences in 2011 and 2013. With lesions in both lungs and his chest wall, he sought the medical attention of Douglas B. Johnson, M.D., assistant professor of Medicine.

Johnson suggested an agent in the newer class of immunotherapies called checkpoint inhibitors. He chose an anti PD-1drug called pembrolizumab, which removes an important negative regulator of T cell function, similar to “removing the brakes” of the immune system against the tumor.

“This was the only option I had to be honest,” said Harrison, a dentist who had closed his private practice in 2005 to teach at the University of Kentucky College of Dentistry. “They were hoping that 40 percent of patients would respond to this treatment. If I chose not to do any treatment, I had eight-15 months to live.”

Accompanied by Joan, his wife of 40 years, Harrison drives four hours from their home in Lexington to Nashville so that he can receive a 35-minute infusion every three weeks. Every three months, he undergoes a CT or PET scan to check his status.

The 64-year-old is hopeful.

“Each year that I live, I am hopeful that there will be something new to come along. We all have to have hope that advancements are still being made,” Harrison said.

With melanoma, there have been significant strides. Up until 2011, the highly toxic IL-2 was a first-line therapy with a 20 percent response rate while 5 to 6 percent of those patients would see long-term cures. Now seldom used, it was replaced by targeted and immunotherapy agents like ipilimumab, an immune checkpoint inhibitor. This drug produced an improved survival rate compared to traditional therapies, and in a small number of patients, it resulted in long-term survival. Today there are even newer therapeutics beyond ipilimumab, said Johnson.

“These newer agents, nivolumab and pembrolizumab, actually produce responses in nearly half of patients, are less toxic and have fewer side effects,” said Johnson. “There is real optimism and hope that in the next five to 10 years, we will be able to say that a significant portion of patients with melanoma are going to be cured.

“This is an emerging cornerstone of cancer treatment. As a class, immunotherapy holds some real advantages in terms of long-term survival and potentially cures in some patients.

“There is definitely more to come.”

It has been a year since Harrison began his therapy. According to Johnson, he has had a complete response to treatment. Scans show no evidence of disease.

“I am blessed, and I have a deep faith,” Harrison said. “I had the recurrence at a time when there was something available to help me. This gives people, who in the past would have had no hope for recovery, an opportunity to enjoy life.”