Harnessing the lethal power of the immune system

They’re on the prowl inside you right now, these “hit men” of the immune system. Their surfaces are armed with receptors that have the dossiers of their “marks”—virus-infected cells, cancer cells or other damaged cells.

When they recognize a target, they have the power to kill. But they aren’t always effective.

“It’s been speculated for a long time that one of the central tenets of the immune system is to sense cancer and eradicate it when it arises,” says Marco Davila, M.D., Ph.D., assistant professor of Medicine and Cancer Biology at Vanderbilt-Ingram Cancer Center. “In some respects you might say that the development of cancer is a failure of the immune system.”

Spurring the immune system to kill tumor cells is the goal of cancer immunotherapy, a field that has seen recent advances with the approval of new drugs that extend life for patients with advanced melanoma, lung cancer and some leukemias.

At the heart of all these advances are T cells, Davila says.

“The most recent discoveries in cancer immunotherapy have really demonstrated that the T cell is a highly effective cancer treating agent,” Davila says. “What we need to do now as cancer immunologists is figure out ways to manipulate these cells to further enhance their ability to kill tumor cells in a safe manner.”

Cancer immunotherapy “has been an overnight success that’s been more than a hundred years in the making,” Davila says.

In the 1890s, the surgical oncologist William Coley noticed that post-surgical bacterial infections appeared to help some patients recover from cancer. Postulating that the immune response to the infection was causing tumor regression, Coley tried to provoke an immune response by injecting bacteria into patients with cancer. Although he reported some successes, his approach involved serious side effects and was not widely adopted. 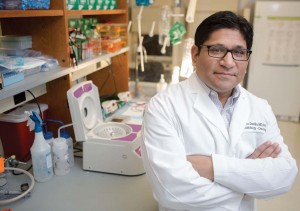 In more recent decades, attempts to activate the immune response with cancer vaccines or signaling molecules like interleukin-2 have not had a strong clinical impact.

The newest advances in immunotherapy stem from years of basic immunology research and the molecular decoding of the “adaptive” immune response—mediated by B and T cells and other factors to allow us to recognize, kill and remember specific pathogens.

A key protein on T cells, called cytotoxic T-lymphocyte-associated protein 4 (CTLA-4), was identified by a group of French researchers in the late 1980s.

At that time, James Allison, Ph.D., now professor and chair of Immunology at the University of Texas MD Anderson Cancer Center, had already identified T cell receptors—the proteins that recognize antigens on virus-infected or cancer cells, and he was on his way to characterizing the T cell’s “gas pedal”—a protein called CD28. In 1995, his group demonstrated that CTLA-4 acts as the T cell’s “brakes.”

The brake system is important for keeping T cells in check, Davila says.

“Other components of the immune system bind CTLA-4 and send T cells the message, ‘you’ve activated enough, you need to slow down and start contracting,” he says.

“So cancer—very, very smart—has figured out a way to co-opt these proteins, to engage the T cells and say, ‘brake, calm down, there’s nothing to do here.’”

Allison wondered if a compound that blocked CTLA-4 would take off the brakes and re-activate those suppressed T cells. It worked. His group reported in 1996 that antibodies directed against CTLA-4 eliminated tumors in mice. A new immunotherapy was on its way.

Because they put the brakes on the immune response, CTLA-4 and another protein called PD-1 are known as checkpoint receptors. The new immunotherapies that target these receptors to take off the brakes are called “checkpoint inhibitors.”

Jeffrey Sosman, M.D., professor of Medicine at Vanderbilt-Ingram, was skeptical when he was asked to participate in the first trials of an anti-CTLA-4 antibody in patients with advanced melanoma.

“I had done some immunotherapy work with drugs like interleukin-2 or vaccines, and we had seen so few responses in such a small number of patients that I felt very frustrated with immunotherapy and doubted it as a viable approach,” he recalls.

During the early trials of the CTLA-4 targeted drug (now called ipilimumab), the investigators saw hints that the drug might be having an effect, Sosman says.

“There were somewhat anecdotal responses, and there were patients who didn’t improve immediately, but seemed to live a lot longer than would have been expected. We knew there something was there.” 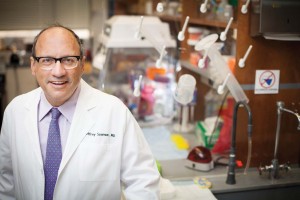 The first randomized trial, published in 2010, “showed a marked survival advantage in patients with metastatic melanoma,” Sosman says. Patients lived an average of 10 months on the drug, compared with six months without it, and nearly a quarter of the participants taking the drug lived at least two years.

Ipilimumab, however, caused notable toxicity, including inflammation of the colon, thyroid and pituitary gland.

“The world of checkpoint inhibitors really changed when another set of drugs came along, the antibodies to PD-1,” Sosman says.

Sosman was also involved in the early trials of the PD-1 targeted drug nivolumab and remembers that the results were striking.

“Up to 50 percent of patients responded with rapid regression of their advanced melanoma and very minimal toxicity,” he says.

Two PD-1-targeted drugs—nivolumab and pembrolizumab—were approved for treating metastatic melanoma in late 2014. They also have activity against other cancers, including lung, kidney and bladder cancers, Sosman says.

“These drugs have really changed the whole perspective of immunotherapy in general,” he says.

Current studies are underway to test combinations of checkpoint inhibitors with each other and with targeted cancer therapies.

Still though, Sosman notes that half of patients don’t respond to the checkpoint inhibitors. He and others posit that patients who don’t respond may not have T cells at the ready.

“We have to figure out ways to generate those cells and get them to the right spot,” Sosman says.

A new therapy using modified T cells attempts to do exactly that.

In 2006, Marco Davila headed to Memorial Sloan Kettering Cancer Center for fellowship training in Medical Oncology. Armed with a Ph.D. in Immunology and an interest in blood cancers, he “was excited about using the immune system to advance the standard of care,” Davila says.

“Memorial had one of the few groups in the world that was interested in pushing T cell therapy from the bench to the bedside.”

Steven Rosenberg, M.D., at the National Cancer Institute, was having success with adoptive T cell therapy—isolating tumor-associated T cells, expanding them in the laboratory and infusing them back into the patient to fight the cancer.

The results were encouraging, Davila says, but the process of growing tumor-reactive T cells took weeks or even months and because of the ways T cell receptors interact with antigens, the end product was useful only for an individual patient.

Davila worked with Michel Sadelain, M.D., Ph.D., and Renier Brentjens, M.D., Ph.D., to develop a different approach. Instead of isolating and expanding tumor-specific T cells, they wanted to take T cells from a patient’s blood and genetically engineer them to recognize and kill cancer cells.

To do this, they introduced a gene into the T cells that encodes a chimeric antigen receptor (CAR): part antibody and part T cell receptor. The antibody directs the CAR T cells to recognize a selected tumor target, and the T cell receptor signals for the T cell to kill this target. The chimeric nature of the molecule allows it to work in any individual’s T cells.

Davila and his colleagues focused on B cell acute lymphoblastic leukemia (B-ALL) and selected a protein on B cells (CD19) as the antigen for the chimeric receptors to recognize. He developed an animal model for B-ALL and validated CD19-targeted CAR T cells as a safe and effective therapy in mice.

But the investigators met some resistance to trying the therapy in humans.

“Our clinical colleagues were not convinced, and I think the strategy seemed a bit crazy to patients,” Davila says.

A bricklayer by trade and a passionate golfer—including seven holes in one and a membership in the Indiana Golf Hall of Fame—Gerald Schreiber has spent his life in the sun. But all that time outside may have caused melanoma, the most deadly form of skin cancer.

The first two patients they treated didn’t convince their colleagues, but then came patient No. 3.

“He was a middle-aged gentleman who had lots of co-morbidities—diabetes, obesity, mild cardiac dysfunction—and had been beaten down by chemotherapy, but he qualified for our trial and was willing to enroll,” Davila says.

“This was the patient my colleagues and I had been working over a decade to see,” Davila says. “What we saw in mice, we could finally see in humans. This one patient was able to completely change the view of our colleagues and led to our first report showing the potential of this technology.”

The CD19-targeted CAR T cells are now entering the next phase of clinical trials for B-ALL and have been granted “breakthrough” designation by the Food and Drug Administration.

Davila, who marvels at finding himself involved in “starting a whole new area of medical oncology,” is now using his animal models to study exactly how CAR T cell therapy works—the components that are required for CAR T cell activation and eradication of malignancies. He aims to understand toxicities such as fevers, hypotension and respiratory depression, and to find ways to block these toxicities without affecting the efficacy of the treatment.

“I’m trying to use a universal donor type concept, so that when a patient comes in with a certain malignancy, we have frozen stocks of CAR T cells for that cancer that we can thaw and infuse into the patient,” he says.

T cells, so-called because they mature in the thymus, are a type of white blood cell that circulates throughout the body searching for damaged cells that need to be destroyed.

Recognizing the advances of CAR T cell therapy and checkpoint inhibitors, Science magazine named cancer immunotherapy the “Breakthrough of the Year” in 2013.

“There’s been hype before, and you always worry about too much hype,” Sosman says.

“I think this time it’s real. I think cancer immunotherapy as a valid form of cancer treatment is here to stay.”