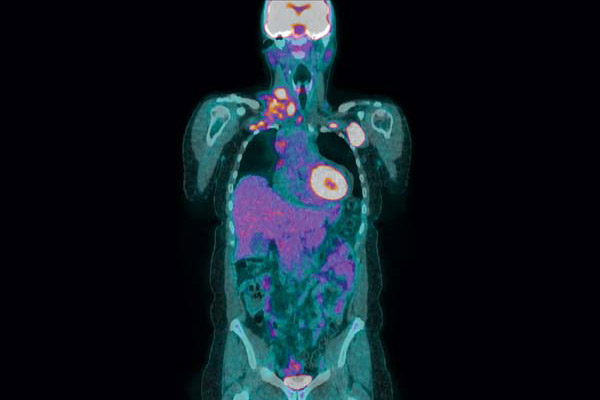 It all started with a faint glow.

It was November 1895, and the German physicist Wilhelm Roentgen was experimenting with an early cathode ray tube—a vacuum tube with a contained electric current. During his experiments he noticed an odd fluorescence in crystals on a nearby table. Surprisingly, the glow continued even when he covered the tube with heavy black paper.

Over the next weeks, he studied these new invisible rays and found that they passed through many materials, including human tissue, but not bones or metals. He captured the first X-ray image of a human body part—his wife’s hand, showing her bones and wedding ring.

His publication in December 1895 excited the world, and within months, surgeons were using X-ray images to guide their work. The field of diagnostic radiology was born.

From those first ghostly X-rays, radiology has advanced to today’s extensive array of biomedical imaging tools such as MRI, PET, CT and ultrasound. These tools offer radiologists unprecedented structural and molecular views inside the body.

For patients with cancer, radiology plays critical roles in all stages of care—from detection and diagnosis to treatment and follow-up.

“We’re committed to adding value to our patients and to our referring oncology colleagues,” he added. “Instead of being located in a dark room and restricting ourselves to image interpretation, we would like to be out front, working together with our colleagues around the Medical Center. Our goal is to generate information that leads to actionable decisions about the care of our patients. We are also expanding our footprint in the direct care of patients.”

Omary sees interventional oncology as a “fourth pillar” of cancer care, joining medical, surgical and radiation oncology to surround a cancer patient with treatment options. He has made it a priority at Vanderbilt and recruited Daniel Brown, M.D., professor of Radiology and Radiological Sciences, to lead a new Division of Interventional Oncology, one of only two formal divisions of the specialty in the country.

“We want to be equal partners with all the other oncology specialties to improve the care of patients with cancer,” Omary said.

“You do what you have to do,” said Pruett, who retired 14 years ago and now owns and oversees more than 500 acres of farmland near Granville, Tenn.

Pruett was introduced to Brown and interventional oncology by William Pao, M.D., Ph.D., who started treating Pruett for lung neuroendocrine tumors in 2010. The disease was stable until routine scans in the summer of 2013 showed metastases to the liver.

“Dr. Pao suggested that Dr. Brown probably could treat the liver tumors—so that I would be able to avoid more chemotherapy,” Pruett said. 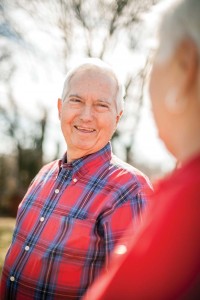 Brown treated the liver cancer directly, using imaging technologies to guide an arterial (into the blood supply) intervention. He made a 2-millimeter incision in the groin and introduced a thin plastic tube (catheter) into the femoral artery. While watching the catheter’s movement with a special type of X-ray imaging called fluoroscopy, he threaded it directly to the liver tumors’ blood supply.

Then, Brown injected small microscopic beads containing the radioactive material yttrium-90. The beads spread through and lodged in the tumor blood vessels to deliver their tumor-killing radiation.

“They told me to expect to be very tired for a couple of weeks, to not feel like doing much, but I did not experience any of that,” Pruett said. “The Y-90 so far has been successful; as long as we stabilize the tumors and the growth remains unchanged, then it’s a winner for us.”

Arterial interventions, like Pruett’s, introduce beads containing either radioactive material (radioembolization) or chemotherapy agents (chemoembolization). These interventions are used for primary and metastatic tumors in the liver.

The other main category of interventional oncology treatment is ablation, which also uses imaging techniques—CT or ultrasound—to guide the precise insertion of needles directly into tumors. The needles can then deliver heat (radiofrequency or microwave ablation) or cold (cryoablation) to kill tumor cells. Ablative therapies are effective for tumors in the liver, kidney, bone, lung or other potential locations in the body.

Pruett also recently had a successful cryoablation procedure for a tumor located above his left kidney.

“I feel blessed to have Dr. Brown and Dr. Pao continually working so diligently, helping me maintain my health and lifestyle,” Pruett said.

Interventional oncology procedures are minimally invasive and have limited toxicities and quick recoveries, Brown said, making them an appealing option for patients with particular types of tumors.

Arterial procedures are a first line of therapy for patients with liver cancer who are waiting for a transplant and for patients with low-grade neuroendocrine tumors in the liver. Cryoablation therapy is becoming more common for certain kidney cancers. Other cases may include palliative treatment of bone metastases to reduce pain and improve quality of life.

“There are procedures along the whole spectrum of cancer therapy,” Brown said.

To make sure that interventional oncology options are considered appropriately, Brown participates in several tumor boards each week, during which specialists caring for cancer patients discuss and plan treatments.

“If interventional oncologists are at the tumor board discussion, it helps our medical, surgical and radiation oncology colleagues understand what we can bring to the table,” Brown said. “We’re equally committed to offering patients the best treatment options.”

Brown expects that ongoing clinical trials will demonstrate the utility of interventional oncology treatments in combination with systemic treatments—to tackle liver metastases from breast or colon cancer, for example, while continuing to treat the primary disease.

In addition to growing interventional oncology, Omary’s vision for the Department of Radiology and Radiological Sciences is to promote translational discovery in imaging that benefits patients.

Discovery efforts in the department and in the Vanderbilt University Institute of Imaging Science (VUIIS) cover the entire spectrum from the development of new imaging tools to pre-clinical studies of advanced imaging applications in animal models to the translation of those applications into the clinical setting.

An area of emphasis is using imaging to personalize cancer treatment—for example, to predict which patients will respond to a targeted cancer therapy or to assess tumor response early in the course of treatment and make changes accordingly.

Yankeelov explained that in current practice, patients with solid tumors have high-resolution MRI or CT imaging to measure the longest dimension of the tumor. Then they have weeks or months of therapy followed by another imaging study. The tumor’s pre- and post-treatment dimensions are compared to assess response.

It’s not possible to simply measure tumor dimensions earlier during therapy to predict the end response, Yankeelov said, because the morphologic changes are a late response to treatment. Instead, investigators need to measure early cellular and molecular changes that relate to two major characteristics of cancer: uncontrolled cell growth and the ability to generate new blood vessels.

“We try to come up with new imaging techniques to measure those things, develop them, optimize them, validate them against histology and other measures in small animals, and then move them into clinical trials,” Yankeelov said.

The goal is “to image at baseline and then really early after the first hit of therapy and look at changes in the parameters we measure, to predict who is and who is not going to respond,” he said.

In a current clinical study, Yankeelov and his colleagues are testing this approach to predict treatment response to neo-adjuvant therapy prior to surgery in women with breast cancer. They are using advanced MRI techniques to measure a “battery of parameters” that reflect tumor cell proliferation and vascularization, before neo-adjuvant treatment and after one cycle of therapy.

“If we know early on who will respond and who won’t, we can switch to a different therapy or proceed with surgery earlier.”

The investigators have tested almost 40 patients and plan to expand the trial to another site.

In one trial, they are using a novel investigational PET tracer called fluoro-estradiol (FES), which binds to estrogen receptors, to guide patient selection for an oral estrogen receptor antagonist and then to track whether the drug has reached its target.

The FES-PET images from one of the first patients in the trial “suggest that the drug has reached distant metastases in the skeleton,” Manning said. “It is plausible that early PET imaging measures like this could predict which patients will ultimately respond to therapy.”

Another trial still in the planning stages will use fluoro-thymidine PET imaging to predict response to a targeted RAF inhibitor in patients with colon cancer early in the course of treatment.

“We anticipate that the PET data will allow us to predict patients who need another drug to be added to the regimen to improve response,” Manning said.

Manning is also excited about efforts in the Molecular Imaging Research Program to develop new classes of PET imaging tracers—the “next generation” of imaging probes that will give molecular information about cancer cell metabolism and utilization of cell building blocks like carbon and cholesterol.

Ultimately, Yankeelov, Manning and their VUIIS colleagues hope to use new imaging tools and technologies to build predictive models of tumor growth—models that can guide and personalize treatment for each individual cancer patient.

“You can imagine doing a ‘virtual’ clinical trial for each patient,” Yankeelov said. “Make a whole range of imaging measurements, put the measurements in the computer model and ‘try out’ dozens of different therapies to predict which would work best. That’s the goal.”