Laughter in Spite of Leukemia

Dori Brown’s spirit and determination inspire others to give

Dori Brown loved to laugh. Her smile and her hearty, infectious laugh endeared her to everyone she met, says her husband Jim Brown.

“I married her because of her smile and her laugh.”

She laughed, even in the days after being diagnosed with acute myeloid leukemia. Jim Brown remembers joking about two of the chemotherapies the doctor told them Dori might receive: idarubicin and daunorubicin.

“I said, ‘Don’t those two also run a deli on the Lower East Side? Ida works out front and Donna works in the back, right?’”

“She managed to touch a lot of people along the way.”

Dori Brown passed away last June. Her spirited battle against leukemia lives on in the efforts of her friends and family, who are raising money to support innovative research and advances in patient care.

Acute myeloid leukemia (AML) is one of the four main types of leukemia – cancer that affects the blood and bone marrow (the spongy tissue inside bones, where blood cells are born).

In a person with leukemia, something goes wrong. The bone marrow produces large numbers of abnormal white blood cells (leukemia cells) that don’t die, and that crowd out and prevent normal blood cells from functioning correctly.

Leukemia is classified into four main types based on two criteria: how quickly the disease progresses and what type of white blood cell is affected. Acute leukemia gets worse quickly; chronic leukemia gets worse slowly. Leukemia that affects myeloid cells is called myeloid, myelogenous, myelocytic or myeloblastic. Leukemia that affects lymphoid cells is called lymphoid, lymphocytic or lymphoblastic.

The four common types of leukemia are:

• acute myeloid leukemia (AML): about 13,000 new cases in the United States per year; occurs in both adults and children

• chronic lymphocytic leukemia (CLL): about 15,000 new cases per year; most common type of leukemia in adults

Like other cancers, leukemia is a genetic disease: gene mutations allow and/or drive cells to grow out of control. Factors that can trigger genetic changes and increase risk for leukemia include radiation, smoking, exposure to the chemical benzene, chemotherapy, blood disorders such as myelodysplastic syndrome, human T-cell leukemia virus type I, and a family history of leukemia.

Dori Brown was an active 39-year-old mother, wife, and banker when she started to feel fatigued in the spring of 2007.

“She wasn’t feeling well, had some bruises and was tired,” Jim Brown recalls.

A few weeks later, she was dizzy and struggled to make it up the front steps at her children’s school. Her physician wasn’t able to see her that day, so she went to a neighborhood walk-in clinic and was referred to the Vanderbilt Emergency Department. 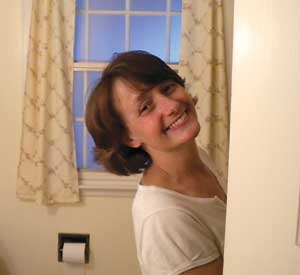 Dori Brown was an active 39-year-old when she was diagnosed with acute myeloid leukemia in 2007.

After four days of tests, they learned that Dori had leukemia.

Getting that news was “like trying to catch a sack full of bricks that have been tossed off a tall building,” Jim Brown wrote on a CaringBridge site he set up to share news of Dori’s AML diagnosis and treatment. “Dori and I cried and cried after the doctors left.”

AML is a complicated disease. It affects people of all ages, but most patients are older – the median age is 67, and 70 percent of patients are over 55. AML has been linked to multiple different genetic mutations and has a poor prognosis: the five-year relative survival rate overall for 2001-2007 was 22.6 percent, according to the National Cancer Institute. (For the same period, five-year relative survival rates overall for the other main types of leukemia were: CLL, 78.0 percent; ALL, 64.4 percent; CML, 57.2 percent.)

There are subgroups of AML – based on the mutations associated with the disease and on the patient’s age and white blood cell count at the time of diagnosis – that have a better prognosis, says Stephen Strickland, M.D., a hematologist/oncologist who treats AML at Vanderbilt-Ingram Cancer Center.

“The best risk group of AML has about a 65 percent chance of being cured. So even in our best risk group, a third of our patients will relapse or have poor outcomes,” he says.

“We have a lot of work to do to improve outcomes in AML.”

Although patients with AML are divided into subgroups with variable prognoses, they are all initially treated the same way, Strickland says.

They receive a standard induction therapy: seven days of two different chemotherapy drugs as a continuous infusion in the hospital. The goal is to achieve remission – no (or very low) evidence of disease in the blood or bone marrow.

This standard therapy was established in 1973.

“While the names of this drug or that drug may have changed over the past several decades, we’re still using essentially the same treatment,” Strickland says.

Strickland is working to change this scenario with targeted therapies that take aim at specific genetic mutations (more on that later).

Despite the four decades of using the same standard induction therapy, there have been increases in survival rates, particularly for younger patients. Strickland attributes these gains to improvements in supportive care during chemotherapy and to the institution of consolidation therapy – additional chemotherapy treatments – after a patient is in remission.

“Consolidation is sort of kicking the leukemia while it’s down,” Strickland says. “We know that even when we don’t see any evidence of disease (after induction therapy), patients will relapse if that’s where we stop.”

The goal of consolidation therapy, he explains, is to maximize the duration of remission and provide a cure or serve as a bridge to more intensive consolidation in the form of a hematopoietic stem cell transplant.

Dori and Jim Brown knew the donor was a 23-year-old male. They had a couple of clues that he might be European (the time delay between harvest of the marrow and its arrival in Nashville, and a form acknowledging the donor’s potential exposure to Mad Cow disease). They imagined him as a Dutch tennis player and “affectionately called him Hans,” Jim Brown says. “We had fun with it.”

Talking about “Hans” made Dori laugh.

The 1960 discovery of a chromosomal defect – a shortened chromosome 22 – in blood cells from patients with CML provided the “first indication that there was a genetic cause of cancer in humans,” says Scott Hiebert, Ph.D., Ingram Professor of Cancer Research and Biochemistry at Vanderbilt-Ingram.

Researchers later demonstrated that the shortened chromosome 22 resulted from an exchange, or translocation, of genetic material between chromosomes 9 and 22. At the junction where a bit of chromosome 9 is fused to 22, a new gene is created that causes leukemia.

Chromosomal translocations cause most forms of acute leukemia, Hiebert says.

“The idea is that these translocations target master regulators of cell – maybe stem cell – function, proliferation and death. So then you probably only have one or two other mutations and you get leukemia,” Hiebert says.

In addition to chromosomal translocations, more recent studies have demonstrated the presence of other genetic changes associated with AML

For example, about one in three patients with AML has a mutation in the FLT3 gene, according to the National Cancer Institute. Two drugs that block FLT3 (along with other tyrosine kinase receptors like FLT3) – sorafenib and sunitinib – are approved for treating kidney cancer. Anecdotal evidence from their off-label use in AML suggests favorable responses, Strickland says.

In another trial, Strickland and colleagues are testing a vaccine-type therapy in AML patients whose leukemia makes high levels of a protein called WT1. The investigators are also documenting the prognoses of patients with certain combinations of genetic mutations, which they will use to guide treatment decisions for future patients.

Testing new agents in AML is particularly challenging, Strickland adds, because the number of patients with AML across the country is small and many are elderly patients who don’t qualify for clinical studies because of other medical conditions. The field also needs a “culture change,” he says, to order testing for genetic mutations right away – or have provisions for stored specimens – so that patients can be appropriately categorized for treatment decisions.

“It’s challenging as the science continues to identify new mutations and new categories of AML patients,” Strickland says. “But I think as we learn how to use some of the new drugs and how to combine them with other therapies, that will lead to better chances at a cure.”

At Dori Brown’s visitation, her friends Tony and Mary Belle Grande “waited in line with hundreds of friends and family,” Tony Grande recalls.

While they were waiting, several members of Dori’s Vanderbilt-Ingram team came in, still dressed in their scrubs.

“It was obvious by their demeanor and care for Jim and his family that their care for Dori ran much deeper than just a job responsibility,” Tony Grande says. “They cared for her physically, but more importantly they cared for her as a person and were grieving like all of us. For them, Dori’s battle was personal.”

The medical team’s presence reminded Tony of his own treatment for thyroid cancer at Vanderbilt-Ingram, and he and his wife decided to reach out and further the Cancer Center’s mission. They opted to give money personally and to appeal to their friends to support a discovery grant in Dori’s honor – a grant that funds high-risk, innovative research. The grant was recently awarded to Scott Hiebert, Ph.D. (see “Leukemia’s Chromosomal Break-ups”).

Jim Brown also is raising money for leukemia research and treatment by running marathons and half-marathons. Running, he says, gives him an outlet and demonstrates to their children, Kathryn and Will, how they can “push forward and honor Dori.”

Dori would want them to keep pressing forward, Jim Brown says. In the weeks before she died, she put together a book of family photographs and words of advice for their children. Among her many wise words:

“Have fun, smile and laugh.”