Scott Hiebert, Ph.D., has been on a 20-year hunt for the causes of acute myeloid leukemia (AML).

When he entered the field in 1992, scientists had identified multiple chromosomal translocations – where two chromosomes break apart and exchange some genetic information – in cells from patients with acute leukemia. At the junctions (breakpoints) where the two chromosome pieces come together, a new gene is created that causes leukemia. 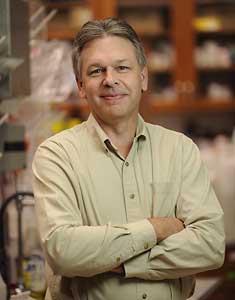 Scott Hiebert, Ph.D., is investigating the causes of AML with the help of a discovery grant in honor of Dori Brown.

“The breakpoints were being identified, and the big questions were: what are the genes that are fused together at these breakpoints, what do they normally do, and how does the fusion gene cause leukemia,” says Hiebert, Ingram Professor of Cancer Research and Biochemistry at Vanderbilt-Ingram Cancer Center.

His team focused on the most frequent translocation in acute myeloid leukemia: 8:21, an exchange of material between chromosomes 8 and 21.

They discovered that one of the genes in the new fusion gene normally binds to DNA, recruits enzymes called histone deacetylases (HDACs) and turns genes off. The fusion gene turns off tumor suppressor genes – genes that normally put the “brakes” on cell growth.

“That suggested a mechanism for how it might be causing leukemia,” Hiebert says.

Their studies suggested that drugs that block HDACs might be beneficial for patients with AML. Anecdotal evidence from a small number of patients looks promising, Hiebert says, but no current trials are testing the concept.

More recently, Hiebert and colleagues have studied the other gene affected by the 8:21 translocation. They discovered that it participates in regulating gene expression in an unexpected way.

The findings “are changing the way we think about how these proteins work,” Hiebert says. “We thought it was simple: turn off the brakes and cells can proliferate. It’s turning out to be far more complex than that and could lead to interesting new therapeutic targets.”

Hiebert is grateful for the support of the recently awarded Dori Brown Discovery Grant.

“Discovery grants are so important to experiments like these where you want to discover something completely new,” Hiebert says. “In these days of tight budgets, you can’t do anything that might be a little bit crazy; you can’t make a mistake.

Photo(s) By: Photo by John Russell