The Path to Recovery

Exercise specialist Karen Dyer, M.S., monitors Joe Lawrence’s blood pressure and heart rate before, during and after his rehabilitation sessions.

It took only 45 minutes for leukemia patient Joe Lawrence to receive the stem cells donated by his brother Kevin, but the procedure itself was just the beginning of his quest to bounce back from a life-threatening form of blood cancer.

To help him on his path to recovery, Joe volunteered to be one of the first patients in Vanderbilt-Ingram Cancer Center’s newly-introduced Stem Cell Transplant Rehabilitation Program. The innovative program known as RESTORE is designed to get transplant patients back on their feet quickly following months of hospital tests and procedures.

RESTORE, which was launched in September 2011, is open to stem cell transplant patients who have received an allogeneic (donor) transplant and are being followed on an outpatient basis. The program focuses on helping patients maintain muscle tone and cardiovascular function, regain strength and manage stress during the lengthy recovery process.

Wherever he goes, Joe Lawrence makes a strong impression. Tall, trim and athletic, Lawrence, 59, strides through life with a cheerful demeanor and a determined attitude. He’s the kind of guy who helps coach his youngest son’s athletic teams, works out most days while traveling for a medical supply company, and regularly travels to football games at his alma mater, the University of Mississippi. 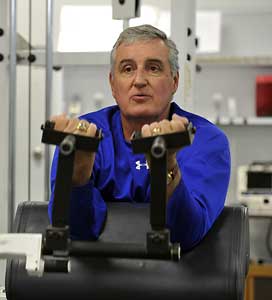 Joe Lawrence volunteered to be one of the first patients in the newly-introduced Stem Cell Transplant Rehabilitation Program.

“Joe is Mr. Positive Attitude. He’s always been that way,” explained brother, Kevin Lawrence, who calls Joe his best friend. “It was always a running joke at the beginning of every football season that Ole Miss was going to be undefeated, according to Joe. That’s just the way he is.”

“Joe’s glass is not half-full, it’s always overflowing,” according to his wife, Michele.

That upbeat view of life was tested in January 2010 when Joe was diagnosed with acute myelogenous leukemia (AML). He had no symptoms prior to the routine blood test that revealed a problem.

“I never felt bad, so it was really kind of a shock,” he remembered.

When it became clear Joe would need a stem cell transplant, he chose Vanderbilt-Ingram Cancer Center’s well-regarded program, led by Madan Jagasia, M.D., director of the Outpatient Transplant Program and section chief for Hematology and Stem Cell Transplant at Vanderbilt-Ingram.

Kevin, who lives in Nashville, turned out to be a good match as a stem cell donor.

“It meant a lot to me because Joe and I are so close, that I could, other than moral support, maybe help cure him,” said Kevin.

Kevin received shots to boost his stem cells while Joe was being blasted with high-dose chemotherapy to kill off his own diseased cells and prepare for the transplant.

“What you go through to give your stem cells is just like giving blood,” explained Kevin.

The next day Joe received the cells harvested from his brother, describing the stem cell transplant as “just like getting a transfusion.”

Patients must stay in Nashville for 100 days post-transplant, checking in with Vanderbilt doctors and nurses nearly every day to make sure that the transplanted stem cells are performing properly.

This is a delicate period when transplant patients are most vulnerable. Some patients must be hospitalized for a few days while their bodies fight to accept the new stem cells and ward off infections.

But many patients do well outside of the hospital because Vanderbilt-Ingram has invested in the infrastructure and staffing needed for its Stem Cell Transplant Outpatient Clinic, which is open seven days a week. Patients are housed nearby in apartments so they can reach the clinic within minutes if problems arise.

Joe stayed on campus in one of these apartments, separated from his wife and youngest son in Mississippi, but determined to stay as healthy as possible during this transition period. To maintain his strength, he enrolled in the new RESTORE Stem Cell Transplant Rehabilitation Program.

Karen Dyer, M.S., program coordinator and exercise specialist at Vanderbilt Dayani Center is one of the experts who spent months determining how best to serve cancer patients.

“We came up with an eight-week wellness program that would include mindfulness exercises, but we would also have movement, stress reduction, nutrition, everything folded together so it would be an integrative mind-body program for cancer patients,” explained Dyer.

Jagasia, who served on the physician advisory board, pointed out that stem cell transplant patients have special needs that could be addressed through a specialized rehabilitation program.

Karen Dyer, M.S., (right) program coordinator and wellness specialist at Vanderbilt Dayani Center, is one of the experts who spent months determining how best to serve cancer patients.

“We have these patients who are here for 100 days and they have to live in the area. A lot of them are too ambulatory for inpatient physical therapy or rehabilitation,” said Jagasia. “We needed something designed for our outpatient population.”

Under the direction of Jay Groves, Ed.D., MMHC, administrative director of the Vanderbilt Dayani Center, the staff designed a rehabilitation program for these special patients. Within days after the transplant, outpatients head to the center for two-hour supervised training sessions that include strength training and cardiovascular exercises. In addition to the twice weekly workouts, patients can come to the center on Fridays to walk on the track.

The rehabilitation sessions are supervised by exercise specialists who have completed specialized training from the American College of Sports Medicine, the American Cancer Society and Cancer Wellfit for work with cancer patients.

“We offer them functional tests, things like standing up and sitting down in a chair, balance testing, and we have them do a six minute walk to test their endurance.”

Dyer said the goal of the rehabilitation course is to prepare patients for home life with activities like “sitting in chairs, getting in and out of cars, being able to reach up and get something from a shelf, being able to carry things, being able to walk and stand for fairly long periods of time.”

The program is designed to help patients maintain their strength and build endurance.

“Sometimes they come in with fatigue and that’s a big issue at this point in their treatment,” said exercise specialist Adriana Hermel, ACSM/ACS-CET, ACSM-CPT. “It’s a very common side effect and patients feel like they can’t do much. We encourage them to come to exercise even if they feel like they can walk only one lap – come. They may work on stretching only – but come. Most patients end up accomplishing more than they expected. Although they may experience fatigue as a side effect of their treatment, they notice significant improvements in endurance through the day, after just a few weeks of regular exercise.”

All in the family

To Joe Lawrence, the opportunity to work out in a supervised setting seemed ideal.

Here, too, his family played an important role in his recovery. His father, also named Joe, is a Dayani Center member and has been exercising there almost every weekday since his retirement in 1993.

The elder Lawrence, now 86, said, “I don’t work out hard but I work out regularly and I suppose it’s kept me fairly healthy.”

Son Joe had visited the center with his dad several years before his transplant and was pleased that they could work out in the same facility. 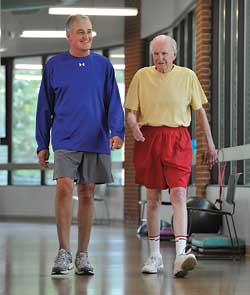 Joe Lawrence and his father walk together at the Vanderbilt Dayani Center.

Within two weeks after his transplant, Joe headed to Dayani with his dad. He spent time walking on the track, working out on weight machines and doing cardiovascular training. He also checked out the tai chi classes and a nutrition class.

He was pleased that the same exercise specialists who have spent years helping his dad supervised his rehabilitation therapy.

“They were right with you and what I really appreciated was the attentiveness. They were making sure that you were correct in the way you were doing an exercise so you didn’t injure yourself,” said Joe. “I think this helped the healing process. It gave me the ability to do something, stay active and keep my strength up and my cardio, which in turn helped my appetite. It was great for me.”

Since the classes are offered in a medically-based facility, exercise specialists monitored his blood pressure and heart rate before, during and after each session. Therapists also track each patient’s weight and fatigue levels and report any concerns about the patients’ health to their physicians.

The therapists said Joe’s air of determination had a positive effect on other rehabilitation patients.

“He has the most buoyant personality and such a can-do attitude and he was such a great cheerleader for the other patients,” explained Dyer. “There were some people that were having a harder time, they got sicker through their transplant process and he really inspired them.”

Joe said he tried to come to every session and the regimen helped him focus on wellness instead of his transplant.

“I forgot I was there because I had a disease. You’re just there because you’re exercising and trying to improve your overall health. It’s a benefit mentally and physically and, if it’s available to you, embrace it. I couldn’t recommend it more,” said Joe.

Photo(s) By: Photos by John Russell

Previous Post: Terri and Natalie Seale: In Their Own Words