VICC Momentum >&nbspNews From Around the Cancer Center

News From Around the Cancer Center

Frances Williams Preston, one of the most successful female music executives in the history of the entertainment industry, and a member of the Vanderbilt-Ingram Cancer Center Board of Overseers, died from congestive heart failure at her home in Nashville, surrounded by her family, Wednesday, June 13. She was 83.

Mrs. Preston spent most of her career with music performance rights giant BMI (Broadcast Music Inc.) and was one of the icons of Nashville’s music industry, first as head of BMI’s Nashville office and later as president of the company (1986-2004), headquartered in New York City.

While rising through the ranks of the music industry, Mrs. Preston also developed a reputation as a strong community volunteer, serving as longtime president of the board of directors of the T. J. Martell Foundation for Leukemia, Cancer and AIDS Research, the music industry’s leading charity.

After receiving Martell’s Humanitarian Award in 1992, she expanded the foundation’s outreach to include the Nashville community and spearheaded the creation of new research facilities at what was then Vanderbilt Cancer Center – now Vanderbilt-Ingram Cancer Center. The “laboratories without walls” were named the Frances Williams Preston Research Laboratories.

Harold L. (Hal) Moses, M.D., founding director of Vanderbilt-Ingram, leads the Preston Laboratories and has worked with Mrs. Preston since the inception of the cancer center.

“Frances Preston has always been a true friend and partner in our efforts to expand cancer research,” said Moses, Hortense B. Ingram Chair of Cancer Research and director emeritus of Vanderbilt-Ingram. “Her vision and commitment to philanthropy made it possible for us to explore scientific questions that have been crucial to the understanding of how cancer cells grow. She was a charming and extremely intelligent woman who understood the importance of basic research and how that eventually translates to patient care.”

Today, the Preston Laboratories include the work of 20 senior scientists with nearly $40 million in active funding from the National Institutes of Health, the U.S. Department of Defense, the pharmaceutical industry and private donors.

“Frances Preston was a visionary leader and a tireless advocate for excellence in cancer research and patient care,” said Jennifer Pietenpol, Ph.D., director of Vanderbilt-Ingram. “It’s safe to say our efforts would not have been as successful without Frances’ unwavering support.”

“Frances stood with Vanderbilt as a steadfast ally in the war against cancer, shaping the research and health care at the Vanderbilt-Ingram Cancer Center from its very beginnings in myriad ways that have impacted countless patients here and across the nation,” said Jeff Balser, M.D., Ph.D., vice chancellor for Health Affairs and dean of the School of Medicine. “Her passing leaves us with a tremendous sense of loss.” 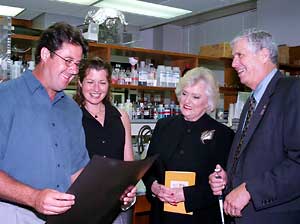 During her work with the Martell Foundation, she helped launch the “Country in the Rockies” ski and music fest, held for several years in Crested Butte, Colo. Many Vanderbilt-affiliated individuals attended these events where famous singers and songwriters provided entertainment and mingled with researchers and donors. “Country in the Rockies” was one

of the most successful fundraising events hosted by the nonprofit foundation.

“Frances pioneered the successful marriage of music and medicine,” said C. Wright Pinson, MBA, M.D., Deputy Vice Chancellor for Health Affairs and CEO of the Vanderbilt Health System. “Through her longtime relationship with Vanderbilt, and through the T.J. Martell Foundation, her legacy of leadership and philanthropy will live on.”

Memorial contributions may be made to the T. J. Martell Foundation, 15 Music Square West, Nashville, Tenn., 37203,

The grants were awarded to Jennifer Pietenpol, Ph.D., director of Vanderbilt-Ingram, and the My Cancer Genome project, developed by Mia Levy, M.D., Ph.D., assistant professor of Medicine and Biomedical Informatics, and William Pao, M.D., Ph.D., director of the Division of Hematology and Oncology and the Cornelius Abernathy Craig Professor of the Vanderbilt-Ingram Cancer Center.

Each group received $100,000 from GE to support their cancer research efforts.

The GE Healthymagination Cancer Challenge, launched in September 2011, is part of GE’s Healthymagination commitment to accelerate cancer innovation by investing $1 billion in cancer technology research and development, as well as improve care for 10 million cancer patients around the world by 2020.

More than 500 individuals or groups from at least 40 countries applied for the research grants in an online competition that also allowed scientists and members of the public to comment on the proposals. Applicants could add visual elements to their proposal and both Vanderbilt-Ingram winners submitted videos to enhance their entries.

Pietenpol’s laboratory recently identified six subtypes of an aggressive and difficult-to-treat form of breast cancer, called triple-negative breast cancer (TNBC). The study, published in the July 2011 issue of the Journal of Clinical Investigation, was the first research to confirm that TNBC is not just one disease.

“Our knowledge of each subtype will enable us to personalize therapy for patients suffering from TNBC, and that is a very big advance,” said Pietenpol, who is the Benjamin F. Byrd Jr. Endowed Professor of Oncology and a professor of Biochemistry, Cancer Biology and Otolaryngology.

“The next step is to move toward a diagnostic test so that we can individualize therapy,” she said. “This GE Healthymagination award allows research advanced by Dr. Brian Lehmann, in collaboration with Dr. Steven Chen, to progress more quickly.”

My Cancer Genome is the nation’s first personalized cancer decision support tool. The easy-to-use online resource educates clinicians, researchers, patients and caregivers on tumor mutations and available targeted therapies. By clicking on a mutation for a specific type of cancer, a physician or patient can find out which drugs may be sensitive or resistant in tumors with this mutation, as well as locate open clinical trials available locally, nationally and internationally.

“My Cancer Genome is an innovative way to use information technology to care for patients,” said Levy, an Ingram Assistant Professor of Cancer Research. “We want to make it as easy as possible for patients and their clinicians to find information about therapies that are available for specific tumor gene mutations.”

Stephen Fesik, Ph.D., Orrin H. Ingram II Professor of Cancer Research and professor of Biochemistry, Pharmacology and Chemistry, received the 2012 AACR Award for Outstanding Achievement in Chemistry in Cancer Research for his use of nuclear magnetic resonance (NMR) to discover novel, potent small molecules capable for use as cancer therapeutics.

Fesik has developed many NMR methods and determined the three-dimensional structures of several proteins. His “SAR (structure-activity relationships) by NMR” method has allowed for the discovery of several inhibitors of protein-protein interactions, including ABT-263 (navitoclax), which is currently in clinical trials.

Pelayo Correa, M.D., professor of Pathology, Microbiology and Immunology, was awarded the Jane Cooke Wright Lectureship, which recognizes an outstanding scientist who has contributed to the field of cancer research and who has, through leadership or by example, furthered the advancement of minority investigators in cancer research.

Correa, the Anne Potter Wilson Professor of Medicine, began studying the epidemiology of gastric cancer and the role of Helicobacter pylori (H. pylori) infections in the disease in the 1960s in his native Colombia. The multi-step progression of the disease – from inflammation to invasive stomach cancer – has been termed “Correa’s Cascade” in recognition of studies defining these stages.

Jeffrey Sosman, M.D., professor of Medicine at Vanderbilt-Ingram Cancer Center, has been named to a melanoma research Dream Team of cancer investigators supported by Stand Up To Cancer (SU2C) and the Melanoma Research Alliance (MRA).

Sosman is among the Dream Team’s principal investigators who will work closely to write the genomic-driven clinical trials and will lead one of several research sites that will enroll melanoma patients in clinical trials. These trials will identify molecular mutations that are unique to each patient’s tumor and match the molecular characteristics to specific investigational drugs targeting these abnormalities.

Melanoma, the most dangerous type of skin cancer, is the fifth most common cancer diagnosed in the United States, where one person dies from the disease every hour. 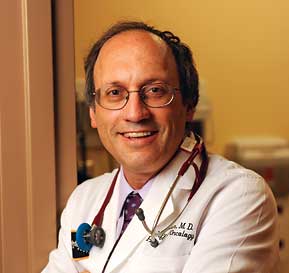 “I am excited about the opportunity to join my colleagues at other leading cancer research institutions as we try to develop more personalized therapies for melanoma patients,” said Sosman, who is an Ingram Professor of Cancer Research.

Dream Team members will molecularly profile BRAFwt melanoma tumors and test for sensitivity to hundreds of compounds that may have therapeutic potential. Researchers will use these data to generate models that predict the sensitivity of BRAFwt melanomas to specific drugs.

An ensuing clinical trial will determine whether this personalized approach significantly improves patient response and survival. The goal is a 30 percent improvement in tumor response compared to standard-of-care therapy.

Sosman is the second Vanderbilt-Ingram researcher named to a SU2C Dream Team. Carlos L. Arteaga, M.D., the Donna S. Hall Chair in Breast Cancer and director of the Breast Cancer Program, is a member of a breast cancer Dream Team targeting the PI3K molecular pathway.

And William Pao, M.D., Ph.D., the Cornelius Abernathy Craig Professor of the Vanderbilt-Ingram Cancer Center and director of Personalized Cancer Medicine and the Division of Hematology and Oncology, has been awarded an Innovative Research Grant from SU2C.

Liebler will lead the Vanderbilt Proteome Characterization Center, one of five academic centers focused on characterizing the proteins and proteomes of human cancers in an effort to develop reliable blood tests that could lead to earlier detection and improved treatments for cancer.

Vanderbilt will receive about $7.8 million over three years to help support the research. 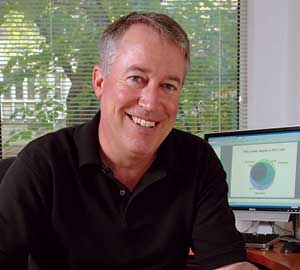 The NCI created the CPTAC research consortium to accelerate the understanding of cancer through the use of quantitative proteomic technologies. Liebler led the Vanderbilt program during a previous five-year program to evaluate and standardize proteomic technology platforms.

Through a partnership with the NCI Cancer Genome Atlas (TCGA) initiative, the new CPTAC consortium will systematically characterize the proteomes linked to alterations in cancer genomes.

“The most exciting opportunity here is to provide proteomic data to help us understand how cancer-related genomic characteristics translate to the behavior of the disease,” said Liebler, who is an Ingram Professor of Cancer Research. “This work will expand our understanding of how specific gene abnormalities affect individual tumors and will broaden the application of genomics to personalized medicine.”

Liebler said the research infrastructure developed by the Jim Ayers Institute for Precancer Detection and Diagnosis at Vanderbilt contributed to the team’s success in the NCI consortium.