The darkest hour came for me on Nov. 19, 2018. As I was chit-chatting with the radiology technician and giving advice for her daughter on navigating pre-medical requirements in college, she was taking X-rays of the cancer that I didn’t know was growing inside of me.

“Tell her to major in something completely different from the science prerequisite courses,” I all-knowingly went on as she methodically continued with the X-ray series.

I felt so at ease as I moved from the X-ray to the ultrasound suite. The ultrasound technician was even more systematic in her technique as I told her my story, “Yes, I am a chief resident in Urology, and I am going to be a urologic oncologist.”

The technician stepped away and brought in the radiologist to talk to me about the images she had just obtained. “There is a mass…it is suspicious…We need to biopsy it today…Are you here by yourself?”

The next six months of my life were pretty much a blur as I embarked on a rollercoaster of treatments that I have often described to patients but never in a million years thought I would experience firsthand. However, what I remember clearly during that time are the people that were there for me every single minute of this grueling journey.

I have always wished that I had a large family with lots of siblings, aunts and uncles. Well for me, I have never felt more part of a family than I did during the last six months of my residency at Vanderbilt University Medical Center. My only wish during this time was to graduate with my fellow residents at the end of June 2019 — stand up together on stage and receive our graduation certificates. My residency family helped me achieve my goal.

“There were to be no looks of pity, special treatment or handicaps offered,” I said as I delivered the news to the department. “I want to be treated the same way as prior to the cancer,” I proudly said with my head held up high, unknowing what I was about to embark on.

People would tell me how lucky I was to be part of the Vanderbilt family, but I never really appreciated it until the end of residency. This family was started by Dr. Joseph A. Smith Jr., a man who has received every award in Urology, but you would never hear about it from him. He brought in the brightest urologists and grew a residency program. They took pride in the types of people who were accepted and how they took care of their own and their patients. During my intern year, Dr. Smith stepped down as the chair of Urology and a new chairman was named — Dr. David F. Penson. 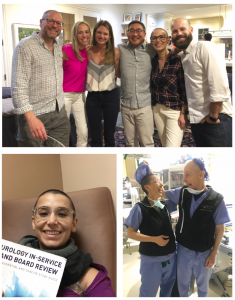 Dr. Penson took on the challenge of filling very big shoes, and he succeeded. Over the next five years, the tradition of hiring — not only the brightest and the most skilled — but the most personable, the most kind and diverse surgeons reigned on. In the process of acquiring surgeons as if he was the manager of a Fantasy Sports League, Dr. Penson had hit after hit. (He actually is an avid Fantasy League player.) The family that Dr. Smith started was alive and well and was multiplying. The camaraderie was not just among faculty but most importantly among the residents; lead by example they did.

By my chief year, I knew that I was part of a big family — my work family, but a family nonetheless that I have always dreamed of and wanted. When my darkest hour came, my family took care of me. They were there for me when my co-chiefs would not let me drive after I read my pathology report in Haiku (a mobile phone version of Epic). I needed to change apartments, and 15 of my co-residents showed up early on a Saturday morning and with smiles on their faces helped to not only move everything but unpack every single item and clean my old apartment. I was stubborn, of course, and would show up to work running on the adrenaline of the steroids I had received the day prior during my chemotherapy treatment, then by the second day would be overcome with a feeling of complete exhaustion.

The residents and faculty would never let me see on their faces what I know they were feeling — compassion, pity, guilt and gratitude that this was not happening to them. Instead, I saw them cheering me on and boosting me up. Every single faculty member extended a helping hand from providing words of support, shaving their head in solidarity, making phone calls on my behalf to expedite my appointments, filling in for me at the VA clinic, recommending an organization that provides chemotherapy friendly meal delivery service, suggesting Gilda’s Club for support, offering for their spouse to drive me to the infusion center, but most importantly, treating me like I was still the same ole Svet — just one of the chief residents helping take care of their patients.

Prior to my diagnosis, I thought that during my chief year my most important accomplishment would be to master the major urologic surgeries that as a medical student I was amazed to witness. Instead, the most important lesson I learned that year was empathy and how to be there for my patients and for my colleagues. Unfortunately, it took a cancer diagnosis for me to realize this, but I am thankful that I was not alone. I had and will always have my Vanderbilt family.

I also want to extend the deepest gratitude to all of the people at the Vanderbilt Breast Clinic who helped take care of me, the ladies at the front desk of One Hundred Oaks, Dr. Ingrid Meszoely, Dr. Ingrid Mayer, Dr. Kent Higdon, Dr. Galen Perdikis, Allison Walker, Mary Egger, Nurse Amanda in the Plastics Clinic, Nurse Tammy at the Infusion center and all of the wonderful staff at VUMC who I may be forgetting.