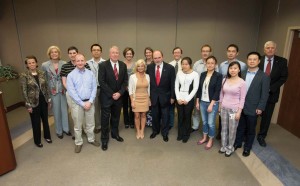 Philanthropists and researchers of the Jim Ayers Institute for Precancer Detection and Diagnosis at Vanderbilt-Ingram Cancer Center gathered in April to celebrate the acceptance of a landmark paper by the prominent science journal Nature.

The report describes protein “signatures” of genetic mutations that drive colorectal cancer, a first-of-its-kind technological achievement that the researchers said will advance the diagnosis and treatment of this and other cancers.

“These are the kinds of discoveries we hoped for when the institute was launched,” said Janet Ayers, who with her husband, Jim, shares a passion for advancing research to impact lives. “To start seeing results like this so quickly is extremely rewarding.” Jim established the Jim Ayers Institute for Precancer Detection and Diagnosis in 2005.

Vanderbilt is a member of the Clinical Proteomic Tumor Analysis Consortium (CPTAC) of the National Cancer Institute, through which the study was funded. But the Ayers’ $10 million gift made the research possible.

Ayers Institute director Daniel Liebler, Ph.D., Ingram Professor of Cancer Research and the paper’s senior author, said that the institute’s support was critical for building the scientific infrastructure at Vanderbilt.

“Without the Ayers Institute, we wouldn’t have been in a position to even apply for the CPTAC program, to be a part of this at all,” he said.

Jim Ayers is chairman of FirstBank in Lexington, Tennessee. Janet, Jim, and his son, Jon, serve on the Ayers Institute Board along with well-known Nashville philanthropists Annette Eskind and Orrin Ingram, who have long supported the Vanderbilt-Ingram Cancer Center, and Clay Petrey, general counsel at Ayers Asset Management in Nashville.

Proteomics is the study of proteins. While many genetic mutations associated with cancer have been identified, it has been more difficult to analyze the structure and function of proteins that actually do cancer’s “work.”

In the report published online by Nature on July 20, the researchers identified five subtypes of colon cancer based on their protein content, one of which was associated with poor outcomes. This new “proteogenomic” approach may help identify patients who would benefit most from chemotherapy after surgery.

Data analysis was led by first author Bing Zhang, Ph.D., associate professor of Biomedical Informatics. “Integrating the proteomics data with the vast amount of pre-existing genomic data is a daunting task,” Zhang said, “however, it is also the key to turn the data into novel insights.”

“Jim and I were interested in helping to fund research that had the possibility of delivering results quickly,” Janet Ayers said. “We knew early detection of colon cancer was key to successful treatment. We were also impressed with the staff and the mission at the Vanderbilt-Ingram Cancer Center.”

The latest findings have “tremendous implications, not just for colon cancer research, but across the entire cancer research spectrum,” she said. “We are very excited to have played a small part in providing the Vanderbilt scientists with a platform for this research.”