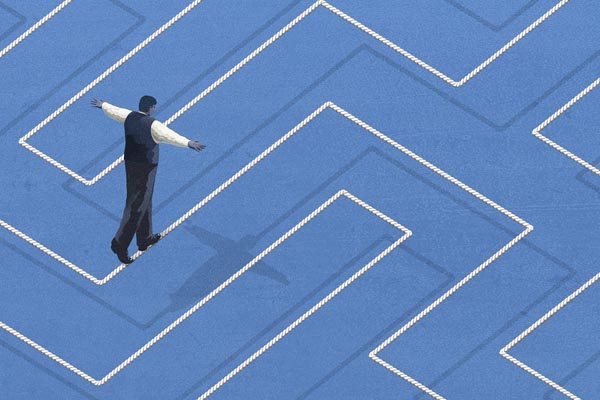 Brenda Bisson was 37 in 2004 when she found out she had acute myeloid leukemia (AML), a type of blood cancer. Her three children were 14, 8 and 16 months at the time. Her marriage was strained. Her prognosis was dire.

Months after her diagnosis, she had an allogeneic stem cell transplant at Vanderbilt-Ingram Cancer Center, and soon after, began vomiting. She had developed graft-versus-host disease (GVHD), a common complication of bone marrow or hematopoietic stem cell transplantation that occurs when the immune system in donated bone marrow or peripheral blood stem cells views the recipient’s body as foreign and attacks the body.

Bisson’s physician, Adetola Kassim, MBBS, MS, professor of Medicine and medical director of the Vanderbilt Stem Cell Transplant and Cellular Therapy Program, was aggressive in his treatment of her severe GVHD, using steroids to try to gain control of her symptoms.

All bone marrow transplant recipients are given a prophylaxis medication early on to try to prevent GVHD. “We often tell our patients a mild case of GVHD can be a good thing, because if the donor immune cells attack your healthy cells, they’re also fighting any leftover cancer cells,” Kassim said.

Giving medication to a patient to prevent GVHD isn’t a one-size-fits-all approach.

It’s complex, and since you can’t accurately predict who’s going to get GVHD, how severe it will be and whether the patient will respond to treatment, the ability to prevent it is limited with the current science. 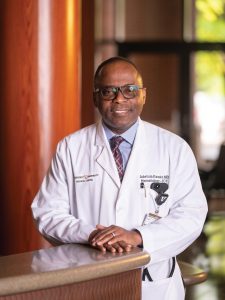 Adetola Kassim, MBBS, MS, has led clinical trials that have resulted in new and more effective treatments for GVHD. Photo by Joe Howell.

Kassim said the attempt is made to match a patient to the right donor through human leukocyte antigens (HLAs), molecules found on the surface of most cells in the body that help the immune system recognize self versus non-self, like infections or other foreign tissue.

There are two types of GVHD — acute and chronic. Traditionally, acute GVHD has been thought to develop within the first 100 days of transplantation, but it can occur later. It can affect the skin, gastrointestinal (GI) tract or liver. It often starts out as a mild skin rash, but can quickly turn into a searing, itchy, red skin rash over the entire body.

When the GI tract is involved, the patient might have some mild nausea and poor appetite, but some have more severe symptoms with crampy abdominal pain and diarrhea. GVHD can be mild, moderate or severe. In some cases, it can be life-threatening.

Chronic GVHD tends to occur a little later — about five to six months after transplant — but may occur at any time or several years after a transplant. It can affect many organs at once — skin, liver, eyes, mouth, lungs, joints, gastrointestinal tract, neuromuscular system or genitourinary tract.

Chronic GVHD manifestations are often similar to an autoimmune disease with resulting fibrotic tissue or scarring. The incidence varies depending upon the donor type (related vs. unrelated), stem cell source (bone marrow vs. peripheral blood), the age of patient and donor and other risk factors.  Chronic GVHD often develops following acute GVHD. It may appear after acute GVHD has resolved, or it may occur without any previous acute GVHD. There are many symptoms that need to be evaluated, as this chronic condition may affect one or more organs.

Treating GVHD can be tricky

Bisson, who lives in Largo, Florida, lived in Medina, Tennessee, at the time of her AML diagnosis. She was told that Vanderbilt-Ingram was the best choice if she wanted to survive. “I prayerfully thought about it, and I chose Vanderbilt.”

As required for stem cell transplant patients, she had to relocate to Nashville for 100 days — the time including the transplant, her time in the hospital, and after, for close monitoring. Her brother, Jack, was her stem cell donor for the Aug. 24, 2004, transplant.

Her children went to live with her pastor during her two rounds of chemotherapy, full body radiation and stem cell transplant, while various family members from other states stepped up for her 24/7 care.

Bisson’s GVHD symptoms, mostly gastrointestinal but including skin rash, began in the hospital. “I threw up so much they thought I might have a stroke,” she said.

Initially, for the treatment of acute GVHD, patients are treated with corticosteroids like prednisone. But only about half of the patients who develop acute GVHD respond to them, making it extremely difficult to treat.

Bisson said she would periodically stop taking prednisone because she was worried about long-term bone damage, but the vomiting would return.

“Dr. Kassim told me I needed to follow their instructions, and I did. I was just a bundle of nerves and exhausted, so it was difficult. He said, ‘at first you’re going to have more bad days than good days, and eventually you will have more good days than bad days, so it will get better.’ It’s a very long tedious process, and he was right.”

At the worst point of her GVHD, she took 80 mg. of prednisone a day. “I had to take sleeping pills to get 2 hours of sleep sometimes,” she said. “Prednisone gives you a lot of artificial energy so you can’t turn off your mind. I would keep going until I crashed, then no energy for days.”

She took prednisone, off and on, for the next seven years, when she was finally able to taper off of the drug.

When patients die from GVHD, they die from the complications of the treatment — because of immunosuppression that leaves patients vulnerable to bacterial, viral and fungal infections.

Vanderbilt-Ingram has a Long-term Transplant Clinic (LTTC), established in 2006, to offer patients multidisciplinary care for GVHD and to create a clinical research platform. The LTTC was one of the founding centers of the Chronic GVHD Consortium, a federally funded program.

In 2003, VICC was one of the first cancer centers in the country to perform transplants as outpatient procedures. After patients return to their communities, their follow-up care is a partnership between the community physicians and the transplant team. Today, a team of six physicians and three nurse practitioners at VICC care for all of the post-transplant patients. Everything is standardized to minimize practice variation, and complex patients are discussed during their conferences.

New treatments on the horizon

Vanderbilt-Ingram joined forces with scientists at Incyte Corp. in 2015 to explore new therapies for the treatment of various types of cancer, as well as other diseases.

Ruxolitinib, developed by Incyte, is a new treatment option for acute GVHD patients who do not respond to corticosteroids. Vanderbilt-Ingram took the lead in the REACH1 trial that was the basis for the FDA approval for ruxolitinib in May 2019, the first drug for patients with acute GVHD who have an inadequate response to steroid treatment.

The ruxolitinib study, published in March in the journal Blood, showed that the drug induces responses in more than half of patients with steroid-refractory GVHD by day 28.

Another treatment being studied for a potential treatment for chronic GVHD, is KD025 (belumosudil), a ROCK2 inhibitor.

Belumosudil is a selective oral inhibitor of Rho-associated coiled-coil kinase 2 (ROCK2), a signaling pathway that modulates inflammatory response. The FDA has granted Orphan Drug Designation to belumosudil for the treatment of patients with chronic GVHD who have received at least two prior lines of systemic therapy.

Both belumosudil and ruxolitinib are given in pill form and well tolerated. And both are showing great promise in helping solve the problem of acute and chronic GVHD.

Another potential treatment being studied is using a patient’s intestinal bacteria to protect them from GVHD. “We are now realizing that your gut flora may play a role in how sick you get with GVHD. There is research into whether altering your gut flora, like with probiotics, can actually impact your established GVHD,” Kassim said.

Kassim said another experimental procedure showing promise is immune system modulation. It’s a type of immunotherapy that enhances the body’s immune response against cancer. Certain T-cells (called T-reg cells) are collected from the patient, expanded and infused back into the patient. “By doing this, you might be able to overwhelm the body and control the GVHD,” Kassim said.

But the risk of giving the patient T-cells is that they might cause GVHD. One promising strategy to get around this issue is called suicide gene therapy.

Before the patient is given the T-cells, the cells are modified in such a way that if the patient is given a specific medication those cells can then be killed off inside the body. “So, I give you the cells and it kills off the disease, but you’re now beginning to have GVHD,” Kassim said. “And the moment I see you are having GVHD, I give you the medication to kill off the cells. They all die and your GVHD attenuates. These are the ways of the future, and we hope to be able to offer all of these treatments in the near future.”

It takes a village

Bisson said her Vanderbilt team helped her heal. “Vanderbilt takes their patients to heart. They go over and above. Dr. Kassim was wonderful and jokingly eased my mind. I told him he was like a loving father to me. I loved him for that.

“When I was so sick, my bilirubin counts were going up. My eyes were orange. He would not stop researching and thinking about it until he figured it out. I never forgot that. When I go to my doctor’s appointments, it’s not just like going to a doctor, it’s like going to an old friend.”

She is now medication-free and doing very well. “Prayer, meditation and healthy eating have helped me. It helps to hold on to something greater than the circumstances to not lose hope, or focus,” Bisson said.

“GVHD is a very long haul. It goes away in a short time for some and for others, it takes years. You have to have something deeper to hold onto. Cancer is not the end of your story, but the most important chapter of your story. It’s a time for personal growth, reflection and reconciliation.”