In early 2014, Mary Beth Ballard and her husband, Chris Murray, were searching for their first home together in Middle Tennessee when she noticed something she initially dismissed as a sign of a minor infection—a small amount of blood in her urine.

Between house hunting and a new job, her schedule was hectic. The blood had stopped, and she had no pain or other symptoms, so she nearly cancelled an appointment she made with a urologist.

“When I went in, they did find microscopic blood in my urine,” Ballard said. “After ruling other things out, they did a scope and the doctor could see that there was a growth in my bladder. I had surgery the next week, but they were saying there was a very low chance it would be cancer, so I wasn’t too worried.”

She underwent an outpatient surgery called a transurethral resection of bladder tumor or TURBT. This procedure is done using an endoscopic surgical instrument called a resectoscope inserted into the bladder through the urethra, with no incision to the abdomen. The resectoscope has a wire loop at the end used to remove abnormal tissues or tumors. The tissue is then sent to a lab to be examined by a pathologist.

“I was of course extremely shocked,” she said. “I was very young to have this; I was just 28. I had no family history of cancer. I didn’t smoke, and I had none of the other risk factors associated with this type of cancer.”

Ballard and her family felt blindsided by the diagnosis, and she soon decided she wanted a second opinion. They began researching bladder cancer and treatment options.

At the time, she was working at Vanderbilt University’s Office of Development and Alumni Relations, and her colleagues recommended that she get an appointment through Vanderbilt-Ingram Cancer Center (VICC) and that she see Sam Chang, M.D., the Patricia and Rodes Hart Professor of Urologic Surgery. Chang recently chaired the American Urological Association’s panels that developed evidence-based clinical guidelines, or the recommended standard of care, for the treatment of bladder cancer.

“The good news is that most common causes of blood in the urine are not cancer,” said Chang. “Most commonly, it might be a kidney stone, or an infection or it might be a result of trauma. Importantly, when you do see blood, you need to be evaluated because if it is a cancer, you obviously want it found and treated sooner as opposed to later.”

Chang used a cystoscope in combination with a fluorescent light and a special dye in order to clearly “light up” any cancer in Ballard’s bladder. After any visible tumors are removed, any remaining cancer cells can be eliminated by fulguration (burning the tissue using an electrical current or laser through the scope).

After Ballard’s procedure, Chang told her nearly 60 percent of her bladder had contained cancer.

“I was incredibly grateful Dr. Chang found the cancer cells, but I had a million questions,” Ballard said. “I had been married not even a year and a half, and we wanted to have children one day. Would we be able to have a family now? Would this mean I would need to have my bladder removed? Was this cancer going to spread? All those questions that go through your head.”

With bladder cancer, 70 percent of the time it is non-invasive, Chang said, and in Ballard’s case, although the cancer covered a large area, it did not appear to have spread outside the bladder or too deeply into the bladder wall. He determined an established immunotherapy, Bacillus Calmette-Guerin (BCG), delivered through a catheter directly into the bladder, a technique called intravesical therapy, was the best course of treatment. The BCG stimulates the body’s own immune response to attack the cancer. Once Ballard’s bladder healed from surgery, she received her first BCG treatment.

“I really liked the idea of starting with immunotherapy, that I would be using my own immune system to fight the cancer, and that there would be no toxicity to my other organs,” Ballard said. “Thankfully, my cancer responded really well to this.”

From March to October, Chang alternated rounds of BCG immunotherapy and TURBT surgery to look for and remove any suspicious tissue. Because her body responded well to the immunotherapy, no chemotherapy was required. After her fourth TURBT surgery, Ballard received the news from Chang she was all clear. She’s received additional doses of BCG, and her last TURBT was in January 2015.

“My husband and I were excited and relieved,” Ballard said. “Now, I come back to Nashville for visits every six months, and Dr. Chang does a scope to see if everything is still clear and I might receive a maintenance dose of BCG. Eventually, my routine will be an annual checkup with the scope. There are different approaches to treating bladder cancer, and that’s one thing I really loved about Vanderbilt. I felt like it was customized for me.”

Because bladder cancer has a high rate of recurrence, once it is diagnosed, it is monitored closely.

Although BCG has been one of the most effective treatments for non-invasive or minimally-invasive bladder cancer for several decades, in recent years many additional innovations have been introduced to allow better diagnosis and improved evaluation, as well as more specialized treatment of the disease, Chang said. There are also more large research studies related to bladder cancer today, he added.

It is because of research findings that physicians now know that treatment for this type of cancer should not be “one size fits all,” Chang said.

“We’re understanding that bladder cancer is not one disease,” he explained. “It is one of the most heterogeneous diseases, and specific genetic signals may be the most important way that we can identify the best treatments for each individual patient. Genetic profiling is being done for more advanced cancers, and at Vanderbilt we are also collecting tissue specimens for future research so we can better understand mutational changes.”

When she noticed blood in her urine, cancer was the furthest thought in her mind, Ballard said, admitting that she had never even heard of bladder cancer.

Although nearly 80,000 new cases of bladder cancer are diagnosed annually, when Ballard tried to research the disease, she found there was little information available for patients. She decided she would do everything she could to raise awareness of the disease to help others. Before she moved back to Kentucky, Ballard was a member of the Vanderbilt-Ingram Cancer Center Ambassadors, a group of young professionals with a shared interest in fighting cancer. She also became involved with a national organization, the Bladder Cancer Advocacy Network (BCAN), and she partnered with BCAN and Vanderbilt to start the first bladder cancer walk in Nashville in 2015. Ballard also went with BCAN representatives and cancer patients to Washington, D.C., to successfully lobby Congress to designate May as Bladder Cancer Awareness Month.

Most recently, she started working with researchers at the University of North Carolina at Chapel Hill on a Patient-Centered Outcomes Research Institute (PCORI) Engagement project to directly involve bladder cancer patients in prioritizing research. PCORI is a nonprofit, nongovernmental organization with a mandate to improve the quality and relevance of evidence available to help patients, caregivers, clinicians, employers, insurers and policy makers reach informed health decisions.

“I now have a passion for work with bladder cancer advocacy,” she said. “I really look forward to helping people in the cancer space.  I want to do something with what’s happened to me that’s truly meaningful. I want there to be a purpose behind this challenge.”

Ballard’s cancer was unusual in that she was a female diagnosed in her 20s with a cancer that typically is diagnosed in older men. But she did exactly what she should have done when she noticed unusual symptoms, Chang said. She went to a doctor to be evaluated.

Chang is even more adamant that everyone needs to get the message about preventing bladder cancer.

“Even though Mary Beth’s cancer was not smoking related, by far the most common cause of bladder cancer is smoking,” he said. “And there is clear evidence that if you stop smoking, you can favorably impact your cancer. There is less chance of you developing cancer if you stop smoking and there is less chance of a recurrence. It will never return to the point as if you were never a smoker, but the longer you stay off cigarettes, the lower your chance of ever developing a bladder tumor.” 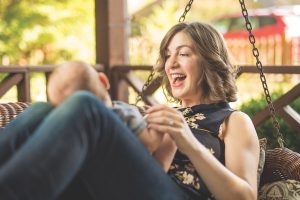 Though she had some frightening days when she wondered if having a child after her cancer diagnosis would even be possible, today they (Ballard and Murray) are the proud parents to a baby boy named Beckett.  They’re enjoying raising him in a rural area of Kentucky where they moved to be closer to her family, but Ballard returns to VICC for her continued monitoring.

“In the summer of 2016, just over two years from my diagnosis, I received maintenance treatment with BCG,” Ballard said. “Dr. Chang told me my bladder looks completely healthy, that I don’t even have scar tissue. He felt comfortable with us trying to start a family in the fall of 2016. We got the green light, and miraculously, I got pregnant. Beckett is just precious, and we’re so grateful that he’s healthy.

“Getting this diagnosis definitely changed my life. First and foremost, I understand how precious life is and not to take it for granted. I think before, my priorities were so career oriented. That’s still important, but I think going through this made me realize that the people in my life and the relationships are the most important.”

Next Post: What to know about smoking and how to quit