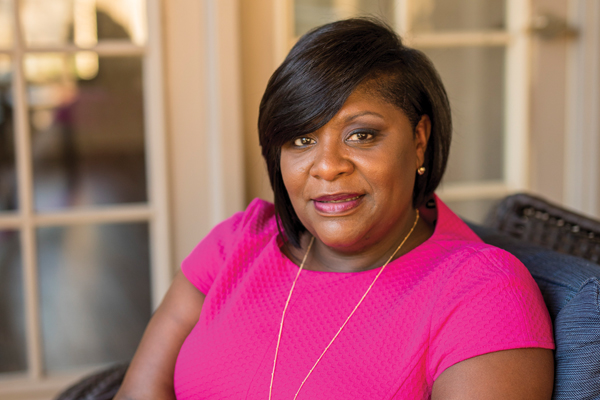 The wait gave Latonya Drumwright a premonition. It was supposed to be a quick visit, something she could get done during her lunch hour on a beautiful March day when the daffodils seemed brighter than sunshine. Now she sat under the glare of a fluorescent light with the uneasy inkling that this mammogram would not be just another routine checkup.

“They put me in this little room,” Drumwright said. “They told me they found something that didn’t look right.”

She took the rest of the day off from work to tell her husband, whose mother had died from breast cancer, that she, too, might have the disease.

Breast cancer is deadlier for African-American women, who have a survival rate of only 68 percent five years after diagnosis and treatment compared to 83 percent for white women, according to a 2015 study published in JAMA Oncology. The disparity in outcomes is well documented, but the reasons for it aren’t understood.

While many factors can figure into African-American health disparities—access to care, environmental stressors, diet—the genetic factor is one with scarce scientific inquiry.

“Most of the studies for breast cancer, just historically, have been conducted in European descendants in the U.S. and also in European countries,” said Zheng, the Anne Potter Wilson Professor of Medicine. “For African-Americans, historically, the sample studies are quite few.”

This study will use a genomic approach in an attempt to identify genetic risk factors. Zheng, working with colleagues at VICC and Meharry Medical College, along with co-principal investigators at the University of Southern California and Boston University, as well as researchers at other institutions, will study samples collected from tens of thousands of women, sharing biospecimens and data from 18 previous studies.

The genome—the complete set of DNA, which encompasses more than 3 billion parts—of women who have donated biospecimens to those studies will be interrogated. The genomes of 20,000 black women with breast cancer will be compared with those of 20,000 black women without breast cancer. They will also be compared to those of white women with breast cancer to identify genetic variations associated with risk. The study does not stop with genetic risk factors. It will also examine gene expression in tumor samples to investigate the pathways for tumor development.

Drumwright’s biopsy in 2014 confirmed she had breast cancer. That was the bad news. The good news was that her tumor was HER-2 positive, ER positive and PR positive. It had all three receptors that could help her tumor respond to hormone or targeted therapies.

But that didn’t mean she could forgo surgery, chemotherapy and radiation. She underwent those treatments and also took a targeted therapy.

“I am blessed,” she said. “I am very blessed to still be here. I knew someone who had triple-negative breast cancer who is no longer with us.” 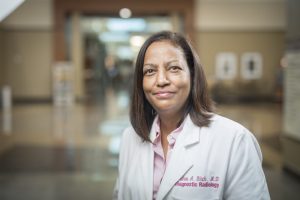 Drumwright was fortunate to have a strong support system said Andrea A. Birch, M.D., who treated her at the Vanderbilt Breast Center. Birch, associate professor of Clinical Radiology and Radiological Sciences, worked previously at a hospital in Memphis, a city with a majority black population and a high poverty rate. People from Mississippi and Arkansas were also treated at the hospital. They faced barriers to care on many fronts: limited transportation options, unfamiliarity with medical terms, insufficient internet access to become better informed about their disease and treatment, and inadequate support from their employers as well as family members hamstrung by paltry paid time-off policies.

Few had health insurance, and participating in mammographic breast cancer screening was considered a luxury, she said.

“African-American women shoulder many burdens, often caring for everyone else at their own expense,” Birch said. “There is often no room to be vulnerable when they feel a breast lump. It takes a backseat to more pressing concerns, such as who is going to take care of the children or grandchildren after school or how the bills will be paid. With the sole responsibility of keeping all of the balls in the air, it’s no wonder they forget they felt a lump, deny they felt a lump or decide the lump isn’t important.”

Even though she witnessed firsthand other factors that contribute to the disparity in breast cancer death rates between blacks and whites, Birch welcomes a $12 million study primarily focused on genetics.

“It’s about time,” Birch said. “I’m grateful that the genetic risk factors impacting the staggering numbers of women who are African-American and dying from breast cancer will be the focus for research. Moreover, I am thrilled that this is being investigated in collaboration between Vanderbilt and Meharry researchers.”

Minority students from various institutions, including Meharry Medical College, a historically black academic health science center in Nashville, will play an important role in the study, the NCI said in announcing the $12 million grant. The grant will also provide training opportunities for scientists from minority populations.

While the Breast Cancer Genetic Study in African-Ancestry Populations is not specifically aimed at developing treatments for aggressive forms of breast cancer, such as triple-negative, it could identify genetic pathways toward the development of new drugs.

“This effort is about making sure that all Americans—no matter their background—reap the same benefits from the promising advances of precision medicine,” said Douglas R. Lowy, M.D., deputy director of NCI. “The exciting new approaches to cancer prevention, diagnosis and treatment ring hollow unless we can effectively narrow the gap of cancer disparities, and this new research initiative will help us do that.”

Tuya Pal, M.D., associate director of Cancer Health Disparities at VICC and Ingram Professor of Cancer Research, said it is vital that genetic risk factors for breast cancer in African-Americans be better understood.

“The reason genomics has become more and more important is because we are tailoring treatments based on the patient’s genomic profile—not just the DNA they were born with, but also the DNA that is in their tumor,” Pal said. “That is how we are targeting many new treatments. As the field moves forward, we want all populations to have the opportunity to benefit from this new knowledge.”

Geneticists and epidemiologists interested in researching cancer causes among African-Americans have been limited in the past due to the paucity of databases and lack of open access to the few that existed, said Shaneda Warren Andersen, Ph.D., a Vanderbilt researcher and instructor.

“I did my dissertation research on breast cancer, but the study data I was using was in white women,” she said.

The National Institutes of Health has since enacted policies to make genetic data publicly available to qualified researchers.

“When I conducted my dissertation, there were few epidemiologic datasets available to conduct research on the genetics of breast cancer risk in African-American women,” Andersen said.

Now that she has joined the Vanderbilt faculty, she is researching racial disparities and health outcomes related to colorectal cancer using data from the Southern Community Cohort Study. That study, a 15-year partnership between Vanderbilt and Meharry, and other studies like it form the foundation for The Breast Cancer Genetic Study in African-Ancestry Populations.

William J. Blot, Ph.D., research professor of Medicine at Vanderbilt and chief executive officer of the International Epidemiology Institute in Rockville, Maryland, and Margaret K. Hargreaves, Ph.D., professor of Internal Medicine at Meharry Medical College, launched the Southern Community Cohort Study in 2002. It became the largest epidemiologic study to assess reasons for racial disparities with cancer. Zheng, who is a co-leader on that study, is also a principal investigator of the Nashville Breast Health Study and another study by the Meharry/Vanderbilt/TSU Cancer Partnership.

“My involvement is purely on the behavioral side of things and what goes on with regard to behavior in combination with genetics,” Sanderson said. “We know that it is not strictly genetics. It is not strictly biology. It is going to be a combination of things. We collect data on all these aspects, put them together and determine what is going on with these more aggressive subtypes of breast cancer that tend to affect African-American women.” 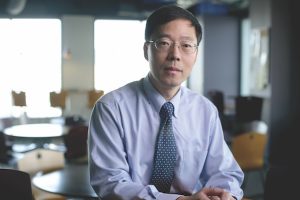 Zheng said he believes that several factors may contribute to disparities in breast cancer outcomes. Almost 20 years ago, he had a scientific study published that investigated a possible link between the disease and diet—specifically the well-done meats that are part of Southern cuisine. (He’s also studied soy intake among Asians.) And he agrees that access to care—good quality care—and a strong support system are important determinants.

Although this $12 million study focuses on African-Americans, all races could benefit from its findings. Triple-negative breast cancer and other aggressive forms of the disease affect people of all ethnicities. This study will go beyond past genetic inquiries, Zheng said, by studying genomic structural variation—differences in the chromosome that can comprise millions of nucleotides and have an effect on disease susceptibility.

“This genomic sequencing provides the opportunity for us to look at structural variation, which has not been studied carefully in the past even in European or Asian descendants,” Zheng said. “This is not only just a study of novel discovery of African-American breast cancer genetics, but also additional genetics that seem to not have been studied in the past. We feel that the African genome is particularly suited for this kind of research because the African genome is more diverse compared to the genome of Asian or European descendants. It is more informative for this kind of discovery.”

The Breast Cancer Genetic Study in African-Ancestry Populations does not require new recruits. Researchers will analyze biospecimens donated by participants in the prior studies, review answers to questionnaires they submitted and compare the data. Participants are masked to protect their identities.

Birch is not one of the researchers. She’s a frontline clinician—one who has come to admire the resilience she’s witnessed in many African-American women, women who have dealt with multiple challenges in their lives to the point that the diagnosis becomes another unfortunate ball to juggle, she said.

Drumwright kept working from April 2014, when her treatments started, until August 2014 when she had to take short-term leave that turned into a longer-term leave. All told, she underwent five surgeries and took a year off from work.

When October 2014 came and “Pink Sunday” arrived at The Temple Church, where her husband, the Rev. Darrell Drumwright, is the pastor, she had to admit she didn’t have the strength to take part in an annual breast cancer walk that week. The congregation members gave her encouragement.

The rate of triple-negative breast cancer is twice as high in black women as in white women. It is called triple-negative because cancer cells do not have estrogen receptors, progesterone receptors or large amounts of HER-2 protein.

“They were saying, ‘next year,’ but I am thinking in my mind ‘Am I going to be here next year’ because I didn’t know,” she said. “I believe in God and prayer, but still you don’t know. Now, of course, I am here. I walked in 2015 and 2016. My husband and children walked with me. We walked with the church as a whole.”

Birch saw Drumwright at one of those events among the hundreds of people wearing pink T-shirts.

“We hugged,” Birch said. “I caught up with her. She told me a little bit about what she was doing. It wasn’t a long conversation, but what struck me was that she was no longer a patient of mine. It was more like a friend and somebody who recognized that she needed to give back.”

The Temple Church Health Ministry schedules free screenings for women by bringing a mobile mammography unit to the church.

“I try to talk to people about making sure they are doing their breast exams and that they are getting mammograms,” Drumwright said. “I try to give back. I had a lot of people helping my family and me. I try to reach out to other people to help them in the same way.”