In January 2011, Harriet Wilson of Hartsville, Tennessee, began to experience pain in her left side, under her rib cage. Her primary care physician ran some tests, ruling out heart problems and shingles. However, blood work revealed something ominous: elevated liver enzymes.

A CT scan helped diagnose the source of her pain: two advanced pancreatic neuroendocrine tumors with metastases to the liver. Wilson was told that her cancer, which likely began in the hormone-producing cells of the body’s neuroendocrine system, was inoperable and incurable.

“We were shocked. Our family was just devastated because it was so unexpected. I’ve worked all my life, raised two children by myself,” said Wilson, who had remarried a few years prior to her diagnosis.

“I was having a great life, playing golf and traveling and doing things I’d never had a chance to do. It was quite devastating for all of us to hear that diagnosis. I went to another doctor in another cancer center and it wasn’t the right fit. My children said we needed to find somewhere else.” 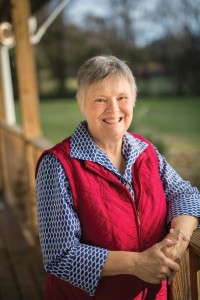 “From then on it’s just been a blessing day and night,” Wilson said “He encouraged me in that he knew the disease front and back; how it progresses, all of the cutting-edge treatments that are available, and he was just right on top of it. We were encouraged from the very moment we walked in the front door that they were going to take care of us, and they have.”

Multiple drugs failed Wilson initially. Then Berlin prescribed a new targeted therapy called sunitinib (Sutent). The new therapy worked against the cancer until it made Wilson sick. Sunitinib can cause side effects, such as heart and vascular issues including high blood pressure and possible blood clots or heart failure.

“In this case, after a while on sunitinib, she had very high blood pressure, which then led to a visit to the Emergency Room with blood pressures of 200/100,” Berlin said. “Unfortunately, we had to stop the sunitinib.”

Fortuitously, Vanderbilt is a national leader in cardio-oncology, a new discipline in medicine that focuses on the cardiovascular effects of novel cancer therapies. The success of cardio-oncology is in part due to the close collaboration between cardiologists and oncologists, who work together to give patients like Wilson the best cancer treatments without adverse effects on the heart.

Berlin referred Wilson to the clinic of Javid Moslehi, M.D., director of the Vanderbilt Cardio-Oncology Program, to develop a strategy for her blood pressure issues and to prevent other potential cardiac problems so she could resume treatment with the sunitinib that was keeping her cancer at bay.

The timing for the visit to the Cardio-Oncology clinic could not have been better for Wilson. Vanderbilt is embarking on a multi-disciplinary approach to understand how promising cancer treatments, specifically certain kinase inhibitors, affect the heart and kidneys.

Unfortunately, these drugs also target vasculature of the heart and the kidney.

“We have realized that the VEGF inhibitors cause elevation in blood pressure in the majority of patients. These drugs also can cause patients to develop clots or thrombotic events—leading to heart attacks, strokes and blockages in the vessels,” said Moslehi. “In addition, the patients also have renal problems, including proteinuria or leakage of proteins in urine.”

In two papers published in the Journal of the American College of Cardiology (JACC) and Journal of Clinical Oncology (JCO), Moslehi and colleagues from other medical centers outline the vascular and metabolic implications of novel targeted cancer therapies and recommend how patients receiving various kinase inhibitors should be monitored and treated.

“These drugs have only come about over the last 10 years, many of them over the last two years. It’s a whole new area for us to understand and explore,” he said.

How to prevent and treat cardiac and vascular toxicities of kinase inhibitors is an important part of the Cardio-Oncology Program. VEGF inhibitors are particularly important for metastatic kidney cancer, for which there were no viable treatments prior to 2004. If the cancer had metastasized, there were no effective drugs. Since that time, five new drugs that work on this pathway have become available.

“They can prolong the average patient’s life from the previous 14 months, to now 32-36 months. However, they all can damage the heart as well as the remaining kidney function,” said Igor Puzanov, M.D., MSCI, FACP, associate professor of Medicine and clinical director of renal cancer in the Division of Hematology-Oncology.

Because many patients who receive kinase therapy experience some sort of cardiac, vascular or renal issues, Vanderbilt now integrates these patients’ care with those of an onco-nephrology clinic and cardio-oncology clinic, as well as care by the treating oncologist.

Providers have agreed on an algorithm for the different groups of kinase inhibitors with respect to patient care. In the case of kinase inhibitors used for kidney cancer, the patients should be monitored for cardiac issues caused by underlying risk factors including diabetes, smoking, hypertension, high cholesterol and kidney disease and treated effectively.

“Pre-treatment risk assessment, consistent monitoring and effective treatment for these patients are critical, because if a patient does have a stroke, heart attack or kidney failure as a result of new cancer therapies, they will not be able to continue with their cancer treatment,” Moslehi said.

Collaboration Between Basic and Clinical Science

The integrative and collaborative nature of the Vanderbilt Cardio-Oncology Program is illustrated by the care of patients with multiple myeloma, a type of cancer formed by malignant plasma cells. More than 26,000 new cases were diagnosed in the United States last year.

Two new classes of therapies—immunomodulators (such as thalidomide and lenalidomide) and proteasome inhibitors (such as bortezomib and carfilzomib)—have revolutionized the care of multiple myeloma patients. Unfortunately, these drugs are associated with cardiac, vascular and thrombotic complications.

Moslehi’s laboratory is working to better understand the nature and mechanisms of these toxicities. Early data from this work suggest an important, previously unappreciated effect of these therapies on endothelial cells.

Daniel Lenihan, M.D., director of Vanderbilt Heart’s clinical research program, is coordinating the Prospective Observation of Cardiac Safety with Proteasome Inhibition (PROTECT) trial, an observational study to define and understand how these promising treatments for multiple myeloma affect the heart. 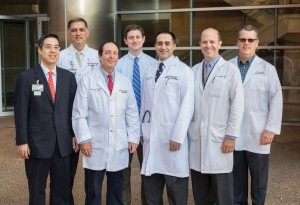 “The proteasome has an important function in the myocardial cell, so inhibiting the proteasome at a sufficient enough level could potentially affect the cardiac system,” Lenihan said.

“These proteasome inhibitors are newly developed therapies for myeloma, and they look like they are starting to have a major impact,” he said. “So, we have a drug that is extending the lives of those patients, and therefore it is an important therapy; how can we do a better job to make sure it’s well tolerated?”

Proteasome inhibitors can potentially cause a range of cardiac problems, including heart failure, left ventricular dysfunction and thrombotic events.

“Any drugs that are potentially very important for the treatment of cancer are going to have side effects,” Lenihan said. “If we do a better job of managing those side effects, then patients can get proper treatment for their cancer while we’re protecting the cardiac structure from damage.”

With proper monitoring of her blood pressure, Harriet Wilson continues to take sunitinib, four years after being diagnosed with a cancer that had spread to her pancreas and liver.

“I feel relatively good. I can do most anything I want to… spend time with my grandchildren and do things we like doing. It’s a blessed life and every day is good. I feel so grateful to Vanderbilt for being there,” she said.

The Vanderbilt Cardio-Oncology Program has fostered a special collaborative relationship combining the expertise of cardiologists and oncologists to understand the effects of cancer therapy on the heart. This type of collaboration is now helping to define the cardiovascular health of nearly 15 million cancer survivors in the United States.

Among those are nearly 3 million breast cancer survivors and almost as many surviving prostate cancer in the United States. Preventing or managing their heart disease has become a growing concern and has significant public health implications.

“A dramatic increase of effective new cancer treatments has given us an enlarging group of cancer survivors,” said Michael Neuss, M.D., chief medical officer of VICC.

“Survivorship care is designed to address both the short- and long-term effects of these treatments. At Vanderbilt we are fortunate to have national leaders in this new area, including specific programs addressing the cardiac and neurologic consequences of cancer.”

The incidence of heart disease has increased in cancer survivors in part as a direct result of cancer therapy itself and can manifest in various forms. This is especially true for breast cancer.

“Heart failure can be caused by breast cancer therapy, especially anthracyclines or trastuzumab,” said Moslehi. “We have also begun to appreciate radiation therapy for breast cancer as a significant risk factor for heart attacks in breast cancer survivors.”

Moslehi recently wrote in an editorial for the New England Journal of Medicine: “Early and aggressive efforts to reduce cardiac risk factors through lifestyle modification or with medical therapy represent the most important intervention to prevent [cardiovascular disease in cancer survivors].”

At the heart of the guidelines is a treatment regimen that Moslehi refers to as ABCDE of cardiovascular disease prevention in cancer survivors: awareness, prophylactic aspirin; blood pressure control; cholesterol lowering, cigarette smoking cessation; diet, dose of chemotherapy, diabetes management; and exercise.

The cardiovascular health of cancer survivors will be a new focus of the National Comprehensive Cancer Network (NCCN), an alliance of 26 leading cancer centers in the United States, including Vanderbilt, whose goal is to advance the quality, effectiveness and efficiency of oncology care so that cancer patients can live better lives.