Colon cancer, when it came, tiptoed into Jeanetta Fargo’s life.

“I felt great. I was working out all the time…I never felt better in my life.”

There had been abdominal spasms a year earlier—discounted when an ultrasound revealed nothing. Even an abnormal screening test during her annual physical exam, and a recommendation from her doctor for a colonoscopy didn’t cause alarm for the 41-year-old high-energy wife and stay-at-home mother of two children whose days were packed with piano lessons, soccer, baseball and lots of volunteering.

But before she and her husband left the parking lot at the California screening center on that day in August 2006, the doctor was on the phone. The colonoscopy revealed cancer in her lower intestinal tract.

“I was in surgery within five days,” remembers Fargo.

Imaging tests and surgery confirmed that the cancer had spread (metastasized) beyond the colon and there were three small tumors in her liver and a growth on one ovary.

Her physician estimated the cancer had been growing for about a year without ever causing clear-cut symptoms.

“There are people diagnosed with metastatic disease who are asymptomatic at the time of diagnosis,” said Emily Chan, M.D., Ph.D., associate professor of Medicine and a colon cancer expert at Vanderbilt-Ingram Cancer Center. “Unless the disease is affecting a critical structure or a nerve, it may not necessarily cause any symptoms.”

More than 132,000 new cases of colon and rectal cancer were diagnosed in the U.S. in 2014, according to the National Cancer Institute, with nearly 50,000 deaths, making it one of the most common and lethal forms of cancer.

When the cancer is still at an early stage, surgery is the initial and sometimes only therapy needed.

“Surgery is the mainstay of treatment for non-metastatic colon and rectal cancer, which are among the more treatable cancers with high survival rates,” said Molly Cone, M.D., assistant professor of Surgery.

“Surgery alone can cure the majority of the earliest stage cancers. In combination with chemotherapy and radiation, surgery is used to treat those with locally advanced disease. There can also be a role for surgery in select cases of metastatic disease.”

To shrink tumors and for disease that has already spread beyond the colon, chemotherapy is still the treatment of choice.

“Twenty-five years ago we had one drug, 5-FU (fluorouracil), and a biochemical modulator leucovorin,” said Chan. “We have multiple other regimens today, with better response rates and people are living longer.”

Fargo is one of those patients with an exceptional response to chemotherapy, and by the time of her diagnosis, another drug, which blocks the formation of blood vessels that feed tumors, had been approved for colon cancer. After the first five rounds of therapy, one liver tumor had disappeared from the scans and her surgeon at Stanford did a liver resection to remove the other area still harboring cancer.

In March 2007 Fargo’s husband, Ed, accepted a job transfer and the family moved to Franklin, Tennessee. Her doctors at Stanford recommended Vanderbilt-Ingram’s Jordan Berlin, M.D., to manage her continuing treatment and the two have worked together in the intervening years to handle her disease.

“Dr. Berlin has always been very aggressive. He and I have always been on the same page because I’m not one to waste time. Let’s make a plan and get it rolling,” said Fargo.

Because her cancer is metastatic, new tumors have appeared over the years in Fargo’s liver, lungs and the remaining ovary. Each time, Vanderbilt surgeons have removed the new tumors, and chemotherapy has been used to stall recurrences.

“She has done amazingly well with chemotherapy and other treatment,” said Berlin, Ingram Professor of Cancer Research and co-leader of the Gastrointestinal Cancer Research Program.

New drugs that target specific tumor mutations and immunotherapies that kickstart a patient’s immune system have been approved for some types of cancer, but those approaches haven’t been as successful in colon cancer.

“While we’re seeing some remarkable effects from targeted therapies and immunotherapies, the only thing that has added to the cure rates of surgery in most cancers, except for breast cancer, has been chemo. It may not be sexy but it works,” said Berlin, who is also the director of Vanderbilt’s Phase I Program for testing of promising new therapies. 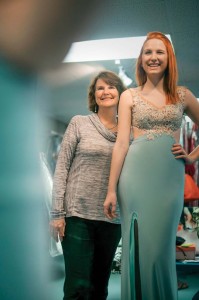 Jeanetta Fargo looks on as her daughter tries on prom dresses. Photo by Daniel Dubois.

Fargo currently receives the chemotherapy regimen for three days at a time (with 11 days between therapy sessions). She spends a few hours at VICC’s Chemotherapy Infusion Clinic the first day, then goes home with a portable battery-operated pump that delivers chemotherapy through a tiny IV that hooks up to the surgically implanted port in her chest. The equipment, which fits into a fanny pack, delivers 46 hours of additional medication.

“So, I’m getting chemo on the go,” explained Fargo. “Even when I have that pack on I can work from the couch.”

Fargo says she is able to go into the office seven out of 10 days for her job as director of communications for a large Brentwood area church.

Side effects over the years have included nausea, fatigue and limited hair loss.

While colon cancer patients who do well with chemotherapy often maintain active lifestyles, metastatic disease still claims far too many patients, so investigators are searching for new therapies.

The biggest obstacle is a gene mutation called KRAS, which is present in half of all colon cancer cases. The KRAS mutation is so complex that it has been considered “undruggable,” but VICC drug development investigators, led by Stephen Fesik, Ph.D., Orrin H. Ingram II Professor of Cancer Research and co-leader of the Signal Transduction and Chemical Biology Research Program, are trying to unlock the molecular mysteries of KRAS to develop new therapies that would help patients with the mutation.

This research is part of VICC’s GI SPORE or Specialized Program of Research Excellence. The federal SPORE program provides research funding for specific forms of cancer and was created by the National Cancer Institute in 1992 to support “translational” research which moves knowledge from the laboratory to the clinic. VICC is on its third round of SPORE funding, with $11.5 million over five years supporting research by an interdisciplinary team of investigators.

One of Coffey’s research interests involves the epidermal growth factor receptor (EGFR), a protein on the surface of cells to which the EGF binds. This binding activity triggers a reaction that causes cells to multiply, and high levels of EGFR are found on the surface of several types of cancer cells. Unfortunately, an existing drug which blocks the EGF receptor only works in a small subset of colorectal cancer patients, so Coffey and his laboratory colleagues have been searching for other ways to inhibit EGFR.

“An important advance in our work has been to identify a new stem cell marker called LRIG1 which is a negative regulator of the EGF receptor,” explained Coffey.

In an article in the journal Cell, Coffey and his colleagues reported that this EGF receptor inhibitor marks a distinct population of colonic stem cells and also acts as a tumor suppressor.

His group has already characterized the normal LRIG1 stem cell and is in the process of characterizing the tumor LRIG1 stem cell, hoping to find the Achilles heel that would make those cells vulnerable to elimination.

The SPORE group is also testing imaging agents used in PET scans. Those agents, developed by H. Charles Manning, Ph.D., associate professor of Radiology and Radiological Sciences, track a number of biological processes including cell growth, cell death and certain cellular metabolic processes and could lead to new procedures or treatments that could be useful in patient care.

While VICC investigators search for new therapies, physicians recommend that patients undergo screening exams to identify colorectal cancer in its earliest curable stages. During a colonoscopy, which involves threading a flexible tube with a camera through the colon, physicians can see any polyps or small growths on the lining of the intestine and actually snip off the growths before they become cancerous.

“The general recommendation is that people get screening beginning at age 50 but if there is a family history, then those folks may need to start screening earlier depending on the age when the youngest person was diagnosed and whether there is a genetic syndrome in that family,” said Chan.

All in the Family

Several genes have been linked to the development of colorectal cancer, and in some cases, the risk is inherited.

Research also suggests that some colorectal cancer may be linked to a poor diet, so eating a diet high in fruits and vegetables and low in sugar and fat is recommended. Studies also indicate that exercise is beneficial.

“People consider a half-a-mile walk a day as exercise. I consider that sedentary,” said Berlin. “The bottom line is there is data showing that in patients that have had resected colon cancer, exercise or an active lifestyle will actually reduce their risk of the colon cancer coming back.”

Fargo says exercise is a big part of her life and she regularly enjoys yoga and walking. She has also started Partners in Hope, a small, informal support group for other cancer patients in her community.

For Fargo, family, work, exercise and helping others with cancer is all about …“having a full life and never feeling like I have to accept something less just because I have cancer.”