VICC Momentum >&nbspEB Jackson: In Her Own Words

EB Jackson: In Her Own Words 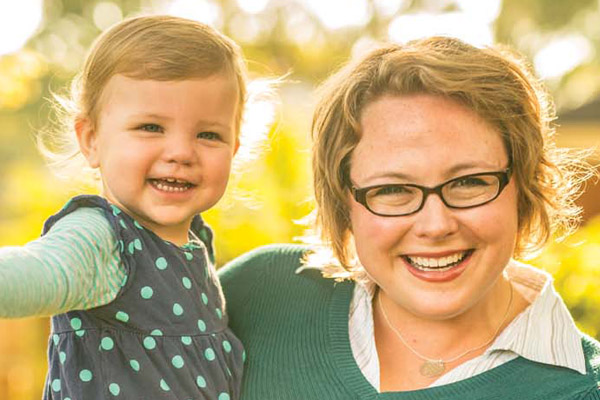 In the summer of 2013, my 39-year-old husband, Todd Jackson, our 4-month-old daughter, Allie, and I were living the life we had dreamed of and worked hard to achieve, when our bliss was interrupted by Todd’s strange speech symptoms. Brain surgery and a diagnosis of glioblastoma, the most aggressive form of brain cancer, followed over the next two weeks.

We had shared the most delightful spring as a new little family. While I was on maternity leave, Todd was working from home as a health care consultant. We marveled at this wondrous creation who had blessed our lives (and disrupted our sleep!). For the first several months of her life, the two of us collaborated intimately on Allie’s day-to-day routine, offering each other constructive parenting feedback on topics ranging from cloth diapering techniques to whether she had enough layers of clothing. Todd would emerge from his office whenever he heard Allie cooing contentedly on the baby monitor after a nap. “Is it time to get her up yet?” he would ask with a grin.

Together, we immediately began to nurture Allie’s inquisitiveness, exploring the world on long walks in our neighborhood and traveling to visit friends and family. I bought a brand new pair of running shoes, and we put many miles on our jogging stroller. Just before I was set to return to work in June, Todd said he felt sure we would look back with great fondness on the intense “togetherness” we had enjoyed, even if we were all a little restless during those final couple of weeks.

Over the July 4th holiday, my sister visited from North Carolina and we all ran the downtown Nashville 5K race. Todd’s time was around 23 minutes. We attended a Vanderbilt Owen Graduate School of Management event that next week, and I noticed that something seemed to be wrong with Todd’s speech. He was struggling to find the right words to express his thoughts (for a man with strong opinions, a sophisticated vocabulary and a gift for self-expression, this was alarming). Worse, he seemed to be replacing words or whole thoughts without realizing it. Over the next few days, we prayed that this could be a stress response and not the re-emergence of a brain tumor.

All the way back in 2003, just six weeks after we had met as work colleagues, Todd had brain surgery to remove a very small, barely malignant pleomorphic xanthoastrocytoma (PXA) that had been causing minor seizure activity. Dr. Reid Thompson, a fairly new addition to Vanderbilt’s faculty at that time, and now the William F. Meacham Professor and chairman of Neurological Surgery, performed a truly elegant procedure. With follow-up radiation directed by Dr. Anthony Cmelak and neuro-oncology consultation with Dr. Paul Moots, we all considered the case closed and enjoyed the best decade of our lives. Todd and I fell in love, earned MBA graduate degrees, honeymooned in St. Maarten, traveled through Europe and Asia, renovated our beloved home in Sylvan Park, and overcame fertility challenges to welcome our little Allie.

Paying tribute to Todd’s experience and to that of too many family and friends, in 2009, we founded and co-chaired Vanderbilt-Ingram’s Young Ambassadors program (youngambassadors.vicc.org), a group of young professionals that provides “seed funding” in the form of Discovery Grants for early-stage, high-risk, high-potential cancer research at Vanderbilt-Ingram. Our group has given away more than $400,000 in first-round funding to our 10 awardees, and more than $125,000 in renewal grants. These brilliant scientists have since generated about $5,000,000 in subsequent funding for their work at Vanderbilt-Ingram from large external funders like the NIH.

As we faced the scary prospect of a new cancer, we quickly learned that this second experience would not be as straightforward as it had been a decade earlier. A fist-sized glioblastoma tumor was invading Todd’s temporal lobe and causing the speech issues. Brain tissue, with all those folds of gray matter resembling an intricate piece of coral, is so vulnerable to glioblastoma, this most malicious kind of cancer that infiltrates the brain and even creates its own self-sustaining vascular structure and blood supply. It’s impossible to cut it all out. This is the kind of cancer that can be slowed down but cannot be cured. Over the next few months of treatment, Todd’s speech improved dramatically, to the point that friends would say, “if you didn’t know, you wouldn’t know.”

A remarkable clinical trial seemed to halt tumor growth after standard treatments including surgery, radiation and chemotherapy had failed.

Those weeks and months felt like we were riding an endless Space Mountain—Disney World’s famous roller coaster in the dark. You knew there would be drops, dips, sharp turns, squeals of laughter and tugs of pain ahead of you, but you couldn’t see them coming.

As we navigated the cancer journey on our own personal roller-coaster-in-the-dark, I kept wishing the lights would pop on, so I could see around the corner, even just a little ways. I’m a bit of a planner, but maybe the lesson of cancer is that you just can’t know what is coming next. In the searing flashes of light that did reveal the true gravity of what we were facing over the last year or so, we were buoyed by family and friends, laughing, crying and supporting us the whole way.

I have been reflecting on the mindfulness practice of “feeling your feelings.” This is sometimes easier said than done. Allowing yourself to get past evaluating, analyzing, discussing, comparing, denying and re-characterizing requires slowing down and summoning courage. For me, there is a physical component to feeling my feelings. Joy is the smell of Allie’s hair as it blows against my face while we step outside and breathe deeply each morning to greet the day. Grief is the tightness in my diaphragm from sobbing in a way I have never known before and the thirst of dehydration from rivers of tears. But isn’t it wild that we have the capacity to feel both with equal intensity? Todd and I always reminded each other that the highs in life wouldn’t be as high without the lows as the counter-point. Over the last few years, I have come to believe that while the extremes do continue to amplify each other, it’s unfair and inauthentic to simply put the “ups” in a bucket labeled “good” and the “downs” in a bucket labeled “bad.” In fact, the hard things are sometimes the most meaningful, even though agonizing at the time. Cancer makes you feel everything more acutely…the exquisitely painful realization that you can’t stop time no matter how much you try, followed by the delicious new appreciation of truly resting in each moment.

In April, just after his 40th birthday, Todd’s cancer began to progress quickly. Despite the uncertainty we all felt, Todd greeted each new day with conviction. We shared raw, vulnerable moments as we contemplated the inevitability of his cancer. Todd died peacefully on June 9, about 10 and a half months after his diagnosis. His memorial service was a remarkable testimony to his remarkable life, filled with levity, irreverence, anecdotes and Beatles songs.

At the time of Todd’s surgery in 2013, I uncovered a partially-used spiral-bound notebook of mine from my undergraduate years. It’s one of those heavier-duty ones, about ¾ inch thick, with a sturdy, dark blue plastic cover. After tearing out a few pages of notes, I put this relic back into service. This book became our constant companion at doctor’s appointments, care-related phone calls, etc. I was remarkably consistent at keeping this important book with us. Others have contributed by taking notes in this book at moments when the information was too emotionally weighty or simply too voluminous to manage. There was one period when the finality of this journey seemed honestly remote. I remember arriving at a routine check-in and realizing that my notebook was at home, reflecting our deep commitment to keep living in the moment and not dwell on cancer when it could be avoided. I took notes on paper and stuck them into the book. Even given the college-ruled pages, I always assumed I would reach the end of my notebook—and many others like it—before the end of Todd’s life. Maybe I’ll have Allie decorate some of the last few pages with her crayons.

In the first couple of weeks after Todd’s passing, silence and stillness, normally my allies, made me feel desperately anxious. Getting in the car by myself, a time I’d often call Todd to laugh, rant or just check in, was a sure trigger for gut-wrenching sobbing. But as the sun rises and sets with reassuring consistency, I have begun to feel more like myself in the stillness. Recently, Allie and I were looking at some of our earliest pictures of the three of us as a family, and I was telling her some favorite stories from those cherished times together after she was born. Todd the doting father took literally thousands of pictures of his baby girl! I use these moments to explain emotions to her that she is really too young to grasp as an 18-month-old toddler (or maybe not). As I cried, she put her arms around my neck, buried her face in my shoulder, and patted my back tenderly. After a few moments, she pulled back. Her face so close to mine that our noses almost touched, she flicked my eyelashes with her little fingers so my tears splashed off onto her own cheeks. The tickling sensation made her giggle…and so we both giggled. With giggles and tears, Allie and I will continue putting one foot in front of the other. We’ll do it for Todd, and we’ll do it for ourselves, and we’ll do it for the chance to serve other people.