VICC Momentum >&nbspEzra Fitz: In His Own Words

Ezra Fitz: In His Own Words

In late January of 2006, I was looking neither at tide pools, nor at stars. I was staring intently – just as I am now, as I’m writing this – into a computer screen, trying to cover a bone-white Word document with a few bits of black text. A publishing company in Chicago needed a novel by one of their Mexican authors translated from Spanish into English, and the deadline for me to deliver a finished manuscript was fast approaching. For the previous couple of weeks, I’d been sitting at this computer morning, noon, and night, trying to finish the job. So when my eyes started to lose their focus, I assumed it was simply due to strain and fatigue.

I saved my work and shut down the computer. I started to walk down the hallway to the living room so I could lie down on the couch and rest. But halfway there, my unfocused eyes were now rolling up and back into my head. I stopped. My mom came over to see why I was standing there in the dark.

And then the seizure came.

The next thing I knew, I was strapped onto a gurney in the back of an ambulance heading for Vanderbilt University Medical Center. A battery of scans and tests were run. The good news was that I could see again. But the bad news was that I had a malignant tumor the size of a golf ball in the left temporal lobe of my brain. And that meant, in a matter of days, I’d be undergoing brain surgery.

Shifting from a writing desk to an operating room table in less than a week was a pretty precipitous change, to say the least. But there was a sense of peace in the speed with which events had progressed, the way a jetliner can sound almost silent to a passenger even while traveling at over 500 miles per hour. I wasn’t even nervous about the surgery itself; that is, until right before I was rolled into the operating room, when my mom and dad squeezed my shoulders, and I could feel how sweaty their palms were.

I was to be awake and conscious during the operation. Language can be affected by temporal lobe damage, and left temporal lesions like mine can disturb the recognition of words. For someone who makes his living as a writer, these are important factors to consider, and I’d be undergoing verbal and visual tests throughout the operation to monitor my linguistic capabilities. An anesthesiologist was there to prevent me from feeling any pain, but my other senses would remain intact. I’d put in a special request to my neurosurgeon, Dr. Kyle Weaver, for some Rolling Stones music to be piped in through the speakers, but when the surgical saw was fired up, sounding like an angry dentist’s drill on steroids, Keith Richards’ bluesy riffs were all but drowned out. And when the saw began cutting into my skull, I felt a wave of vibrations that couldn’t have been produced by even the loudest of electric guitars.

Nearly five hours later, I was finally allowed to fall asleep. When I woke up later, in the ICU, my sister was in the room with me.

“How are you feeling?” she asked.

I could hear her. That was a good sign. And I could understand her, too. I knew what those words meant. But how much of my left temporal lobe remained? Did I still possess enough language to answer her?

“I want a cannoli,” I replied.

After spending a few more days recovering in the hospital, I was allowed to return home on Super Bowl Sunday. My favorite team, the Pittsburgh Steelers, was squaring off against the Seattle Seahawks, and the halftime show featured my favorite band – you guessed it – The Rolling Stones. The Stones rocked and rolled across the stage, and the Steelers ran up and down the field, winning 21-10.

I was just days removed from brain surgery, and I couldn’t have been happier. 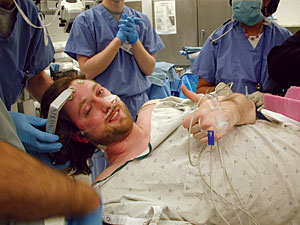 Feeling surprisingly serene, Ezra gives a “thumbs-up” in the operating room just prior to brain surgery, during which he had to be awake and conscious.

But of course, surgery was just the on-ramp leading up to the road to recovery. About a month later, I started 30 rounds of radiation, and that treatment was followed by 12 monthly rounds of chemotherapy. Also thrown into the mix were two relatively minor follow-up surgeries to clean out a rather stubborn staph infection. Every step along the way – every little bit of progress made – was tempered by the discovery of new challenges and limitations. In college, I was a Division I track and cross-country athlete with a 1:21 half-marathon under my belt. In 2008, I ran the Country Music Half Marathon in just over 2:10. Yes, the race could still be run, but my breezy, six-minute pace had morphed into plodding, 10-minute miles.

Mental obstacles lay ahead as well. I couldn’t pluck words out of the thin air with the same ease and facility as I had before. And it seemed that the more trivial the situation was, the more frustrating it became. I remember one afternoon in a sub shop, trying to order a sandwich with no tomatoes. But I couldn’t come up with the word “tomato” itself. I tried to describe to the person what it was that I didn’t want: it’s a red vegetable, they’re round, and when you slice them they become flat, but at the same time they’re still round … clearly, this was an exercise in futility, and in the end it was all to no avail. I had survived brain cancer, only to be condemned to a life in which all sandwiches would be slathered with thick, slimy, revolting tomatoes. It was almost enough to make me miss hospital food.

But let’s face it: this really wasn’t so bad. We all slow down as we get older, and since I like things like pizza, pico de gallo, and salsa, I suppose I could learn to tolerate the occasional tomato in yet another form. Life was different, but it was still quite decent. My neuro-oncologist, Dr. Paul Moots, told me about Gilda’s Club Nashville, a community for anyone and everyone touched by cancer, and it was there that I began forging friendships with other survivors … friendships that endure well beyond the span of human life. I decided not to return to grad school, and instead wrote a novel of my own (attention publishers: call me!) in which one protagonist is a cancer survivor. I rescued a pound hound with big, floppy ears and soulful, plaintive eyes from a shelter in Franklin. I went to my brother’s Princeton graduation, where I met Bill Cowher, former coach of the Steelers, and his wife Kaye, and told them the story about how significant their Super Bowl victory was for me. And most importantly, back in Nashville, I met a stunning and exciting woman whom I would end up marrying.

Life looks bleak when you’re diagnosed with cancer, when you’re forced to face that long, slow walk up to the edge of the precipice. But when you’re lucky enough to be able to turn around and walk back upon solid ground, with the slightest of grins traipsing across your lips, it’s hard not to feel pretty good about things. Not great, necessarily, but pretty good nonetheless. A far superior writer than myself from Oxford, Miss., famously spoke of the human condition in terms of enduring versus prevailing. But those of us who have gone toe-to-toe with cancer and lived to tell the tale prefer to use a different word: survival. (Although, thanks to Lance Armstrong, the word “LiveStrong” is now a close second.) 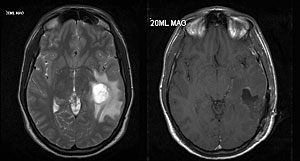 Survival means taking the good with the bad. Back in July, I had an MRI scan that showed no evidence of tumor re-growth. A clean bill of health. Later that same week, though, Bill Cowher’s wife Kaye lost her own battle with skin cancer. My memories of victory on the operating table and on the football field now had to share the same space with a new memory of loss, of defeat.

But survival also means finding deeper significance in all things great and small. In his book, “The Log from the Sea of Cortez,” John Steinbeck wrote that “quality of sunlight, blueness and smoothness of water, boat engines, and ourselves were all parts of a larger whole and we could begin to feel its nature but not its size.”

The specific type of tumor I had is known as an astrocytoma. It’s called that because it originates in a particular set of brain cells known as astrocytes. And if those names make you think of astronauts or astrology, there’s a reason for that. Astrocytes are surprisingly, yet unmistakably, star-shaped.

In that same book, Steinbeck advised us of the benefits inherent in looking back and forth between the tide pool and the stars, and I’ve been doing that ever since I first read it roughly 20 years ago. Then, I saw (or thought I saw) plankton and planets and all things in between. But now, as a cancer survivor, I also see astrocytes. The very same starry, microscopic cells that play a principal role in repairing the brain after traumatic injuries almost killed me.

But they didn’t. Not yet, anyway. And until that day comes, I’m a survivor.

Photo(s) By: Photo by Daniel Dubois