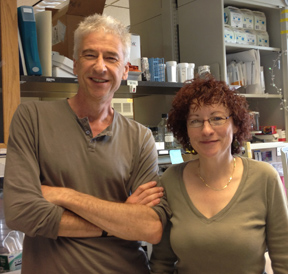 Ian Macara, Ph.D., recently joined the faculty as the new chair of the Vanderbilt Department of Cell and Developmental Biology.

Macara, who was also named the Louise B. McGavock Professor, succeeds Susan Wente, Ph.D., associate vice chancellor for Health Affairs and senior associate dean for Biomedical Sciences, in this role.

Macara came to Vanderbilt from the University of Virginia School of Medicine, where he was the Harrison Distinguished Professor of Microbiology and director of the Advanced Microscopy Facility with the UVa’s Center for Cell Signaling.

His research interests include cell polarization mechanisms in epithelia; epithelial morphogenesis in mammary glands and breast cancer; polarity proteins as tumor suppressors and RNA localization. His research has focused on the role of GTP binding proteins as molecular switches which control a wide range of biological processes including: receptor signaling, intracellular signal transduction pathways and protein synthesis.

Macara joins a growing Department of Cell and Developmental Biology. Under Wente’s direction, the department’s extramural research grant portfolio increased by nearly 73 percent and its number of graduate students nearly doubled from 45 to 85.

Macara is a popular presenter among peer professionals, speaking at conferences and symposiums within the U.S. and abroad, and serving as Distinguished Lecturer at Fox Chase Cancer Center; plenary lecturer at the annual meeting of the Korean Society for Molecular and Cell Biology in Seoul, South Korea; and program keynote speaker, U891 INSERM, Marseille, France.

The author of more than 150 research publications, he is also the recipient of professional distinctions such as the University of Virginia Distinguished Scientist Award and UVa’s Harrison Distinguished Professorship.

Macara received his bachelor’s and doctorate degrees in Biochemistry from the University of Sheffield, UK. He underwent postdoctoral training at Brandies University, and Harvard University, and was a Miller Visiting Professor at UC Berkeley in 1997.

At the University of Virginia, Lannigan’s research focused on signaling pathways involved in mammary gland homeostasis and breast cancer. Last year, Lannigan and fellow researchers at UVa published a novel study in the journal Genes & Development demonstrating that they could successfully and accurately replicate the early growth of human breast tissue outside of the body by using a novel three-dimensional model developed in their lab.

The model allows researchers to visualize how breast tissue grows in its earliest stages, providing the capability for a close look at the early stages of breast cancer and the potential to understand how and why the normal well- ordered development is lost in cancer. 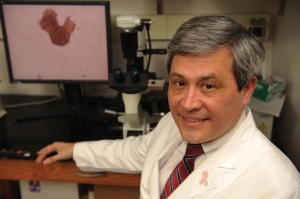 Carlos Arteaga, M.D., associate director for Clinical Research and director of the Breast Cancer Program at Vanderbilt-Ingram Cancer Center (VICC), has been named to the Scientific Advisory Board of the Susan G. Komen for the Cure Breast Cancer Research Foundation.

Komen is the one of the largest nonprofit organizations dedicated to funding breast cancer research and providing support for patients, survivors and their families. Since its inception in 1982, Susan G. Komen for the Cure has invested more than $1.9 billion in breast cancer research, education and support programs.

The Komen Scientific Advisory Board is a six-member group of cancer investigators and advocates who work to enhance the organization’s scientific peer review process and support other Komen activities.

Arteaga was named to the advisory board because of his “experience, leadership, knowledge and drive for innovation in breast cancer research.” Board members, who serve a three-year term, provide insight and advice about the best research directions to fund and assist with medical information for breast cancer education.

“I am honored by the invitation to join this important advisory group,” said Arteaga. “Komen has been a great partner and supporter of our breast cancer research here at VICC and I am pleased to assist with their research and education mission.”

Arteaga previously served for two years as a member of the Komen Scholars, a group of international investigators with a wide range of expertise, including clinical and
laboratory research, pathology, radiation oncology, surgery, pathology, prevention and other research disciplines and specialties.

Arteaga holds the Donna S. Hall Chair in Breast Cancer. His research has been instrumental in characterizing the role of several key pathways in breast cancer, including those responsible for cell growth, division and metastasis.

Vanderbilt-Ingram Cancer Center’s gastrointestinal Specialized Program of Research Excellence (SPORE) has been awarded its third round of funding by the National Cancer Institute (NCI).

“We decided to roll the dice and propose high-risk, high-reward projects,” said Robert Coffey Jr., M.D., Ingram Professor of Cancer Research, professor of Medicine and Cell and Developmental Biology, and director of the GI SPORE. “This included a project focused on colon cancer stem cells and another to develop a drug to inhibit the mutant KRAS oncogene, thought to be an undruggable target.”

The gamble paid off. The NCI — a division of the National Institutes of Health — will provide $11.5 million over the next five years to continue to support the gastrointestinal (GI) SPORE, which focuses on colorectal cancer, the most common form of GI cancer in the U.S., with an estimated 142,820 new cases and 50,830 this year.

The federal SPORE program provides research funding for specific forms of cancer and was created by the NCI in 1992 to support “translational” research which moves knowledge from the laboratory bench to the clinic for patient therapy.

This emphasis on bench-to-bedside research is designed to accelerate the pace of scientific inquiry in support of better patient care.

The competition for these SPORE grants is intense.

The team members are focused on learning more about the causes and potential therapies for colorectal cancer.

“A distinguishing feature of our GI SPORE is that patient advocates are integral members of each project,” said Coffey. “I cannot emphasize enough how much our GI SPORE is a team effort.”

Coffey noted the contributions of Meghan O’Loughlin and Leticia Wallace, who worked tirelessly on the grant preparation.

“We are delighted by the renewal of the GI SPORE grant, especially during this time of increasingly tight federal research budgets,” said Jennifer Pietenpol, Ph.D., director of Vanderbilt-Ingram. “Dr. Coffey continues to provide tremendous leadership for this integrated group of investigators.”

“Bob has once again assembled an incredible team and they have the potential to translate discovery into meaningful improvements in the prevention and treatment of colorectal cancer,” said Nancy Brown, M.D., chair of the Department of Medicine.

The National Cancer Institute of the National Institutes of Health is supporting this research under Award Number P50CA095103.

Vanderbilt physicians, who are specialists in Medical Oncology and Hematology, will see patients in the new facility. The board-certified cancer specialists, led by Michael Neuss, M.D., chief medical officer at Vanderbilt-Ingram, will provide diagnosis and treatment of cancer as well as blood disorders.

The new outpatient facility, which is located on the second floor of the NorthCrest medical office facility at 500 NorthCrest Drive, Suite 521, is designed to treat adult patients.

The new facility will allow patients to come to one office to receive medical care, including physician and nursing visits, laboratory testing and chemotherapy treatments. Radiology imaging and other services will continue to be provided on NorthCrest Medical Center’s main campus.

NorthCrest Medical Center is a not-for-profit community hospital that has been providing quality health care since 1956. The hospital offers inpatient, outpatient and emergency medical services to patients in northern Middle Tennessee and Southern Kentucky.

The new cancer clinic will make it more convenient for patients to receive comprehensive cancer care close to home, including the opportunity to enroll in the latest clinical research trials under way at Vanderbilt.

A recent affiliation agreement between NorthCrest Medical Center and Vanderbilt University Medical Center affirms the common goal shared by the organizations for a more cost-effective regional health care delivery system,
and a commitment to approach this goal collaboratively. 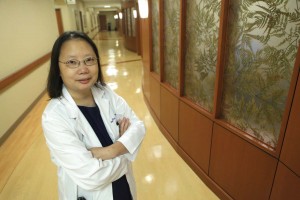 This pilot project for colorectal cancer is part of Vanderbilt-Ingram’s Personalized Cancer Medicine Initiative (PCMI), a program to identify genetic mutations in a patient’s tumor that may be useful in matching the appropriate therapy with each patient. VICC patients with lung cancer, breast cancer and melanoma already have their tumors tested for specific mutations, and now some colorectal cancer patients will be added as part of a pilot program.

“We’re testing a panel of eight genes, including mutations in the KRAS and BRAF genes,” said Emily Chan, M.D., Ph.D., assistant professor of Medicine and clinical director of GI Oncology. “What we’re looking at are genes that are known to be mutated in some colorectal cancers. Companies are already developing drugs that block the molecular pathway that gets activated in some of these gene mutations. Other genes don’t have drugs available at the moment, but that doesn’t mean they won’t down the road.”

Some of the mutated genes may serve as predictive markers that indicate how patients may respond to a specific therapy. The results may also help physicians match patients to clinical research trials that target certain molecular pathways in the tumor.

The gene tests are conducted on tissue samples from the patient’s tumor. About 200 patients will be tested during this initial colorectal cancer program and the results will be evaluated for future projects. 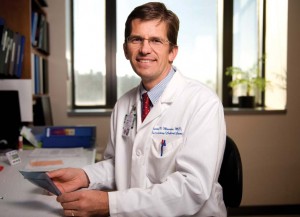 Pierre Massion, M.D., professor of Medicine and Cancer Biology, has been named director of the Thoracic Program at Vanderbilt-Ingram Cancer Center.

Massion, who joined Vanderbilt in 2001, will lead the wide-ranging program that is designed to perform cutting-edge lung cancer research and provide exceptional services to patients with lung cancer and other diseases of the chest.

“I am very honored and excited about the opportunity to enhance our patient care, education and research programs to galvanize the discoveries and foster the academic mission of Vanderbilt-Ingram,” said Massion, an Ingram Associate Professor of Cancer Research.

“Pierre Massion is a dynamic leader whose research accomplishments and commitment to patient care and education make him the perfect choice to lead this effort,” said Jennifer Pietenpol, Ph.D., director of Vanderbilt-Ingram.

Massion and his colleagues plan to enhance the Thoracic Program, which will be segmented into three arms.

The first arm features a Thoracic Center led by Joseph B. (Bill) Putnam, M.D., and Otis Rickman, D.O. The Thoracic Center will open a new early detection clinic to screen and distinguish benign lung nodules from early stage lung cancer, when there is the best chance for a cure. Clinicians will use innovative technologies for noninvasive diagnosis as well as minimally invasive thoracic surgeries. They will also expand personalized care for patients who are dealing with more advanced disease, including intensive palliative care for patients. There will also be a strong emphasis on the prevention of lung cancer, with an integrated smoking cessation program.

The second arm is a Thoracic Educational Program led by Leora Horn, M.D., Eric Grogan, M.D., and Rickman, which is designed to provide academic training for students, fellows and clinicians in preventive, diagnostic and continuing care, with special emphasis on continuing medical education for physicians.

“We also want to empower our survivorship group and bring education to the forefront for all of our beneficiaries, particularly patients at risk for lung cancer, as well as patient advocates,” said Massion.

The third arm is the Thoracic Research Program, led by William Pao, M.D., Ph.D., and Massion, which will be integrated within the lung cancer center and continue to develop investigator-initiated studies including clinical trials geared toward prevention, early diagnosis, personalized medicine and health services research.

“The Thoracic Program will be a collaborative and interdisciplinary team effort to cultivate an outstanding program with the leading-edge lung cancer care and research in the nation,” said Massion.