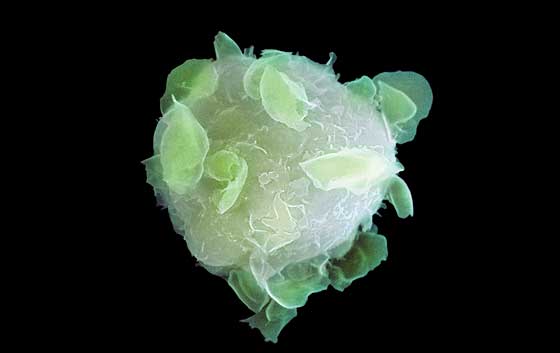 Although she is now “100 percent donor” and her new immune system appears to be functioning well, she remains vigilant against the health complications related to her transplant – like infections, for example.

“I hated wearing the mask because I couldn’t stand something over my face,” Meredith admits. “But if I’m in Walmart, and somebody starts coughing, I’ll put it on.”

“And if my husband gets sick, he sleeps in the other bed,” she says with a chuckle.

Such precautions are warranted. A viral infection that may only cause minor discomfort to most people can spell serious trouble for a patient who has had a stem cell transplant (SCT).

“They say I’ll always be more apt to get an infection than the average person,” she notes. “The main thing is, if you have a problem, don’t let it slide. Take care of it right away, because it can quickly get really bad.”

Meredith is right: patients who have undergone SCT have to be watchful not only for infections, but for a wide variety of issues that crop up after – sometimes several years or decades after – their transplant.

“After transplantation, more than half of the patients will be cured,” said Bipin Savani, M.D., associate professor of Medicine and director of the Long-Term Transplant Clinic (LTTC).

“But those patients who survive beyond five years, without intervention, their life expectancies are actually 10- to 15-fold lower than the general population.”

According to Savani, there are about 50,000 allogeneic stem cell transplantations performed worldwide every year – and those numbers are rising 10 percent to 15 percent per year. So by 2020, Savani estimates that there will be almost half a million long-term survivors who will be at risk of transplant-related complications.

“Patients who are cured are vulnerable for late effects of transplantation. They can die from transplant-related complications even after 10 years post-transplant.”

Vanderbilt-Ingram Cancer Center is one of a small number of centers in the world with a program focused on late effects of transplantation, he says.

“The goal is to prevent and screen and (to develop) preventive guidelines and management guidelines to educate primary care physicians on the late effects of stem cell transplant.”

After a patient undergoes an allogeneic (donor) stem cell transplant and the “acute care” phase for 100 days following the transplant, the patient “graduates” to the LTTC, explained Madan Jagasia, M.D., director of the Outpatient Transplant Program and section chief for Hematology and Stem Cell Transplant at Vanderbilt-Ingram.

“We are one of few long-term clinics,” he noted, “and we follow these patients indefinitely after day 100.”

In the first year post-transplant, the goal is to monitor for graft-versus-host disease (see “When the Treatment Fights Back“) and to get patients off immunosuppressive therapy as soon as possible. After two years, the focus shifts to vaccination and screening for the host of late effects that can occur in transplant patients (see list, at left). 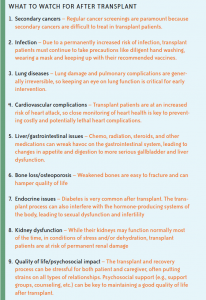 “We open this huge Pandora’s box (of late effects of transplant),” says Jagasia, an associate professor of Medicine. “The leukemia may be gone, the patient has survived, but how do we get them back to normalcy? That is the challenge.”

Besides screening and monitoring for specific late effects, the clinic also has programs to help patients recover their function and quality of life. Based on research showing that a patient’s fitness dictates their outcome after transplant, Vanderbilt-Ingram recently began working collaboratively with the Vanderbilt Dayani Center to establish a post-transplant rehabilitation program to get patients moving again as soon as possible after transplant (see “The Path to Recovery“).

“As soon as they recover their blood counts, they are out there exercising,” says Jagasia. The Vanderbilt program is unique, he says. “Nobody else seems to be integrating rehab this early.”

Mike Brown, who had a transplant in early 2011 for non-Hodgkin lymphoma, is a believer in getting an early start on rehabilitation. While his transplant occurred before the Vanderbilt program was established, Brown took the initiative on his own to pursue rehab and physical therapy in his hometown of Crossville, Tenn.

“It has made a world of difference in my recuperation,” Brown says, who has dealt with gallbladder and dental problems likely related to his transplant and associated chemotherapy.

Just one year post-transplant, he now feels nearly back to normal and ready to get back on the water for his favorite activity: rowing.

He attributes his quicker-than-expected rebound to the aggressive physical therapy and fitness routine – and to the unwavering support of his wife, Sue, who he affectionately calls the “Surgeon General” because of her take-charge attitude in his health care.

“All of those things really make a lot of difference in making a person whole again,” Brown says. 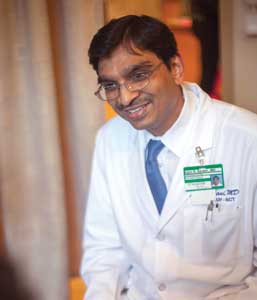 Psychiatrist John Shuster Jr., M.D., sees all SCT patients at day 100 post-transplant to screen for issues that may impact a patient’s quality of life, including: depression, anxiety, issues with sleeping, fatigue, spiritual peace and social support.

“At day 100, this is a chance to really look at quality of life things, to make sure that those kinds of things aren’t falling through the cracks,” said Shuster, a professor of Psychiatry and Medicine.

A stem cell transplant – or any major or chronic medical condition – can put strains on relationships and mental and spiritual health, Shuster said. Marital problems are surprisingly common among transplant patients, along with problems in other relationships at work, within the family and with friends.

While the most common problem at day 100 is insomnia, Shuster finds that what causes most patients trouble is anxiety.

That was certainly true for Joan Meredith when she was going through the information about late effects of transplant.

“When you read all the terrible things that could happen, it scares you to death,” says Meredith.

While Meredith has had some lingering effects – mild GVHD of the skin and eye, fatigue, pain and hypothyroidism likely resulting from the chemotherapy – her recovery has gone relatively smoothly. She says she feels like one of the lucky ones.

“The further from the transplant I get, the more relaxed I get about it,” she says. “A lot of the time, it just seems like (it was) a bad dream.”

Mike Brown says humor is another of his keys to coping with the situation.

“Even though it was a very serious situation, I have tried not to take this episode I’ve been through too seriously,” he says. “I just lived it day to day…and kind of laughed my way through it.”

“Lots of people – maybe most people – are generally coping pretty well,” says Shuster. “Most people report that they have a high degree of spiritual peace. Many people report that this has been a life-changing experience in a positive way, that they’ve had some substantial personal growth, maybe they’ve been able to really put things in perspective and get their priorities straight, really come to enjoy every day and to appreciate their important relationships with the people that they love.”

“That’s really gratifying to witness and to be part of helping,” he said, “because that’s the whole point – to help people not only get more days, but to get more out of their days.”