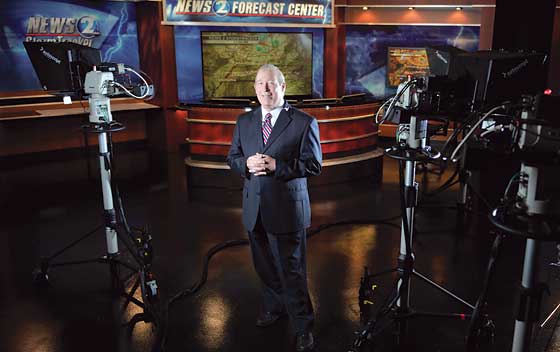 The best meteorologists can seem akin to conjurers – mixing scientific information about pressure gradients and wind patterns with a dollop of gut instinct to create weather forecasts that often appear magically accurate.

As a meteorologist for WKRN Channel 2 in Nashville, Davis Nolan, 57, is an expert at diagnosing weather patterns that can create violent winds and thunderous storms. But he had no hints about the potentially deadly storms that were brewing inside his own body, until a routine visit to his primary care physician led to a diagnosis of not just one, but two, unrelated forms of cancer.

During a regular checkup, Nolan’s doctor ordered a diagnostic blood test to check the levels of prostate-specific antigen (PSA), which is sometimes a marker for prostate cancer. The prostate is a walnut-size gland located just below the bladder in men.

Nolan’s PSA levels were high, so his doctor ordered a biopsy of some prostate tissue and the biopsy revealed something unexpected – tumor cells.

The doctor said, the bad news is you do have prostate cancer but the good news is it is self-contained and it hasn’t spread, so it’s totally curable,” said Nolan.

As a precaution, the urologist ordered a CT scan and this time the doctors found something more ominous.

“He came back with a long look on his face at the next appointment and said he had found something different,” said Nolan.

What a radiologist saw on the CT scan had nothing to do with prostate cancer. Instead, the test revealed evidence of a different form of cancer.

“It was something in my blood and there were two spots in my ribs and a spot in one of my lower vertebrae,” said Nolan.

Those spots that appeared on the CT scan of Nolan’s bones are the hallmarks of multiple myeloma, a form of blood cancer that begins in the bone marrow and usually results in tumors in the bone.

“The doctor said this prostate thing is on the back burner now because this is much more dangerous,” Nolan remembered. “He said with these kinds of things we’re good at a five- or 10-year survival rate but not much after that.”

Nolan and his wife were trying to cope with the shocking diagnosis.

“I’m thinking my daughter will be 20 when I’m dead. My wife was crying. It was pretty devastating.”

No Clouds on the Horizon

Nolan had no symptoms that would have helped his doctors forecast the disease in advance. Common symptoms include bone pain, broken bones, weakness, fatigue, weight loss, nausea or constipation, feeling excessively thirsty or frequent urination.

Multiple myeloma originates in the plasma cells which are a type of white blood cell. The disease starts when a plasma cell becomes abnormal and begins to divide and multiply. Eventually, the myeloma cells collect in the bone marrow and start destroying parts of the bone. These aberrant cells can also damage other tissue and organs, including the kidneys.

Approximately 21,700 people will be diagnosed with multiple myeloma in the United States in 2012, and 10,710 will die from the blood disorder, according to the National Cancer Institute. This form of cancer is more common among men, individuals over the age of 65 and African-Americans. Researchers aren’t sure what causes the disease, although patients with a family history are more likely to develop the blood cancer.

Nolan had no symptoms, family history of the disease or obvious risk factors like another blood disorder. Like most patients, he developed cancer for reasons that are still unknown.

And, like other multiple myeloma patients, he faced a lengthy and complex treatment regimen with no guarantees about the outcome. His cancer journey would be a marathon, not a sprint.

Nolan’s physicians referred him to Vanderbilt-Ingram Cancer Center to help coordinate what would become a very complicated cancer treatment, including an autologous transplant using Nolan’s own stem cells to treat the multiple myeloma. 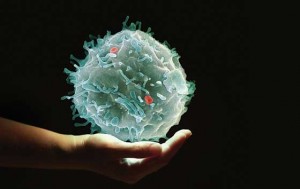 Madan Jagasia, M.D., director of the Outpatient Transplant Program and section chief for Hematology and Stem Cell Transplant at Vanderbilt-Ingram, was in charge of his care.

“Multiple myeloma in its active phase is, over time, a life-threatening disease,” explained Jagasia. “Davis’s situation is a little bit unusual so it required a team approach working with his referring oncologist and his urologist at Baptist Hospital.”

The team had to decide how to balance the risks from two different forms of cancer.

“Both of these diagnoses individually are treatable and controllable so you don’t want to lose sight of one disease while you are focusing on the other disease,” said Jagasia.

Nolan’s multiple myeloma was far more dangerous, so Vanderbilt-Ingram physicians, in conjunction with Nashville oncologist Karl Rogers, M.D., decided to treat the blood cancer first. Rogers started with chemotherapy using novel drug agents to try to get Nolan into a controlled state, and then they took a hiatus from the myeloma therapy to address the prostate issues.

For his prostate cancer treatment, Nolan chose brachytherapy, which involves implanting radioactive seeds in the prostate to destroy the cancerous cells.

When the brachytherapy was completed, the medical team had to decide how to treat Nolan’s multiple myeloma. Since the disease is fairly difficult to cure with today’s therapies, the goal is to achieve a lengthy and durable remission and a stem cell transplant with the patient’s own cells is one of the best options to achieve an initial remission.

So Nolan chose the autologous transplant which required harvesting his own stem cells. For several hours, his own blood was fed through tubes to an apheresis machine where the cells were separated until enough stem cells had been collected.

Nolan said he was pain-free and wide awake during the procedure.

“You sit there for two or three hours and you don’t feel a thing,” Nolan explained. “I was literally having my stem cells harvested and worked on a laptop and did updates on the weather website for Channel 2.” 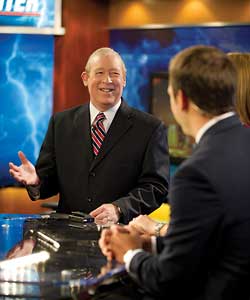 Today, Nolan is back at work full time doing TV and radio weather reports for Channel 2. He takes maintenance medication to try to keep his myeloma under control, along with a bone-building drug.

Nolan was happy to learn that the team was able to harvest enough of his stem cells for two transplants, in case he needs a second infusion of cells.

Before receiving the stem cells, the patient’s own bone marrow system must be wiped out to prevent the body from attacking the re-introduced cells. Chemotherapy is the weapon used for this phase of the battle.

“This is basically as high a dose of chemotherapy as the human body can take because with that intensity of chemotherapy we essentially destroy the entire bone marrow,” explained Jagasia. “That’s the reason before we deliver that chemotherapy we collect the patient’s own stem cells in a process called stem cell mobilization.”

This is the most dangerous phase of the transplant process because the patient’s own immune system has been wiped out and they can develop fevers and other side effects. That’s what happened to Nolan, who spent four days on the immune-suppression floor of Vanderbilt University Hospital. While he was behind closed doors, he wasn’t out of touch with his TV colleagues. He arranged to have the Channel 2 morning show crew give an on-air shout-out to the nurses on his floor – thanking them for their care.

When Nolan was stabilized, the frozen stem cells were re-infused.

On schedule, Nolan’s numbers started to rebound and eventually his strength returned. The transplant was working.

Nolan was able to stay on the job at Channel 2 throughout most of the process because Vanderbilt-Ingram has built a robust outpatient transplant program for patients with blood cancers.

“We’ve been doing outpatient transplants since 2006 and today close to 70 percent of our transplants are done as outpatient procedures,” explained Jagasia. “It requires a lot of pieces to be in place – a clinic that is open and fully staffed seven days a week, off-campus housing accommodations, quick access to the emergency room and rapid admission to the hospital should patients require an admission. Vanderbilt has built that infrastructure to help our patients.”

Jagasia said this commitment to the outpatient program makes Vanderbilt a leader in this arena.

“Many of the hospitals in the country do not have all of these pieces lined up to manage a successful outpatient program. Over the last five years we’ve done it fairly successfully.

“Patients prefer it that way because, if they are from out of town, they stay in apartments near the Cancer Center rather than in a single hospital room. It’s easier on their family and caregivers.”

“At no point in time do we compromise patient safety, so we have strict criteria for admission and we are always overcautious,” said Jagasia.

Since Nolan lives within close driving distance to the clinic, he was able to live at home during the months following the transplant when he had to be monitored on a daily basis.

Today, he is back at work full time doing TV and radio weather reports for Channel 2. He takes maintenance medication to try to keep his myeloma under control, along with a bone-building drug.

While the disease may eventually relapse, requiring more chemotherapy and another transplant, this experienced weather forecaster has decided to worry about potential storm clouds later.

“I was born and raised in New Orleans, and I have little elderly aunts praying novenas and rosaries for me,” Nolan smiled. “I have people in churches here in Tennessee that I don’t even know and I’m on their prayer lists. With all of that power maybe I can be one of the exceptions.”