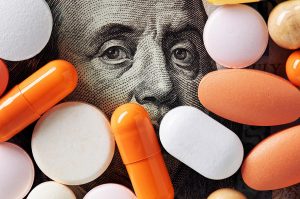 A new study in the New England Journal of Medicine highlights how some older Americans diagnosed with cancer can face unlimited out-of-pocket spending for prescription drugs under the current structure of the Medicare Part D benefit.

The analysis, authored by Stacie Dusetzina, PhD, Ingram associate professor of Cancer Research and associate professor of Health Policy, illustrates how the current design of Medicare’s prescription drug benefit program can cost people without subsidies more than $10,000 for one year of treatment. In fact, across the 10 drugs studied, each of these drugs would cost Medicare beneficiaries over $3,000 for just the first month’s fill.

Dusetzina provides an example for a patient diagnosed with hormone receptor-positive, human epidermal growth factor receptor type 2 (HER2)-negative breast cancer, and another with HER2-positive breast cancer. The preferred first-line therapy for HER2-positive breast cancer involves two orally administered drugs covered under Medicare Part D, an aromatase inhibitor that is low cost and available widely in generic form, and palbociclib, the most commonly used CDK4/6 inhbitor. Palbociclib is expensive for Part D beneficiaries who do not qualify for low-income subsidies and can cost more than $10,500 for the first year of therapy.

The preferred therapy for patients with HER2-negative breast cancer, however, is a physician-administered infusion of a combination of drugs, which is covered at virtually no cost under the medical benefit of a person’s health plan (Medicare Part B).

Most Medicare beneficiaries have supplemental coverage to limit their costs or they have out-of-pocket limits on their medical benefits. A woman diagnosed with breast cancer who is single and has the median income would not qualify for a full or partial subsidy. This means she would pay nearly half her annual income for this one drug alone, not including insurance premiums or other necessary medical care.

“Patients may have to pay much more out of pocket to receive the treatments that they need if those drugs are covered under Medicare Part D than if they are covered under Part B. Patients also don’t have a choice about what benefit they use for their drugs or what cancer type they get,” Dusetzina said. “It is incredibly unfair to have your cancer type dictate whether or not you can afford to be treated, even on the same health plan.”

And this scenario where patients face large out-of-pocket expenses is not just for patients with this type of breast cancer, the analysis said. Most beneficiaries would reach the catastrophic phase of Part D’s coverage program after the first fill, after which the patient would be responsible for 5% of the cost the rest of the year.

“Assuming beneficiaries filled prescriptions for these drugs every month, they would spend between $10,000 and $15,000 out of pocket for one year of treatment with a single drug,” the study said.

Dusetzina said this is just another illustration of why Part D needs to be reformed, so that all patients can afford and access the treatment they need.