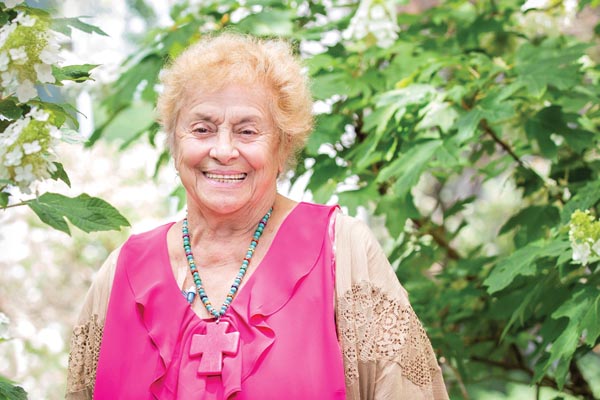 Dona Potter rode Harleys and drove 18-wheelers back when men dominated the open highways, and she is still defying expectations.

The 87-year-old from Tullahoma, Tennessee, has proven that age is not a barrier to tolerating and benefiting from chimeric antigen receptor cell therapy (CAR-T), a new immunotherapy that entails re-engineering a patient’s T cells to target cancer. Diagnosed with non-Hodgkin lymphoma, she received the treatment by participating in a clinical trial at Vanderbilt-Ingram Cancer Center (VICC).

A persistent pain led her to seek medical attention.

“I was starting to have this nagging pain in my groin, and I felt as though someone was digging their nails in it,” Potter said. “I went to Dr. Stephen Bills, my doctor in Tullahoma, and he sent me for a PET scan. The next day, he told me I had cancer in a pelvic bone and sent me to Dr. Herbert Schwartz at Vanderbilt for surgery.”

The cancer was actually non-Hodgkin lymphoma that had metastasized and spread to her bone. After surgery, she received her first chemotherapy treatment at Vanderbilt, then scheduled subsequent treatments in Tullahoma. During a follow-up visit at VICC with Bhagirathbhai Dholaria, MBBS, assistant professor of Hematology and Oncology, she learned the cancer was not responding to chemotherapy.

“Ms. Potter was diagnosed with an aggressive diffuse large B-cell lymphoma, which unfortunately progressed after initial two cycles of chemoimmunotherapy,” Dholaria said. “The standard of care in such situations is more intensive chemotherapy followed by an autologous hematopoietic cell transplantation. However, given the encouraging experience we have with CAR-T therapy in other patients, we decided to enroll her in a clinical trial testing the role of CD19-directed CAR-T therapy.

“Her age was initially a concern, but given her excellent performance status, we decided to move forward with the clinical trial. Her courage and trust helped us to push the limits of this novel form of immunotherapy.”

Dholaria referred her to Olalekan Oluwole, MBBS, MPH, assistant professor of Medicine, who specializes in CAR-T therapy.  Potter underwent CAR-T therapy in mid-September 2019 as part of a clinical trial.

“In large cell lymphoma, failure to achieve remission with chemotherapy portends a poor prognosis, and there are historical data that suggest that as many as 50% of such patients will die within six months. In order for a patient to have a fighting chance, they need to have high doses of chemotherapy coupled with an autologous stem cell transplant,” Oluwole said.

“Ms. Potter is ineligible for transplant due to advanced age. Thankfully, we have this new clinical trial where she can participate, and that has extended a new hope for her. It is great to have this CAR-T option for those who really had none.”

VICC in 2016 became the first cancer center in Tennessee to treat a patient with CAR-T. Since some patients can experience serious complications, the treatment is limited to elite cancer centers with clinicians experienced in recognizing and managing those complications.

Potter was hospitalized at Vanderbilt University Medical Center for eight days while she was closely monitored for reactions. Her only reaction was a high-grade fever for two days.

“I kind of just floated along,” she said. “Actually, the whole thing hasn’t been that bad. The nurses were exceptional, and the doctors were all wonderful. Everybody has treated me so well here.”

CAR-T is prescribed for diffuse large B-cell lymphoma, a subtype of non-Hodgkin lymphoma, that has relapsed or proven resistant to treatment and for B-cell acute lymphoblastic leukemia in patients 25 and younger.

The one-time infusion is an effective treatment that renders remission in many patients.

The treatment has spurred Potter’s immune system to fight the cancer. Her tumors are shrinking. She said she’s always been the type to keep forging ahead, having worked as a waitress, small business owner and truck driver who has reared four sons.

“I’ve worked my whole life putting kids through college, taking care of kids and doing one thing after another,” Potter said.

She’s a Harley-Davidson owner who has been featured in Outlaw Biker, Harley Women and Easyriders magazines.

“The bike was my escape. It was the best fun I ever had in my life, and I kept my clothes on at all times,” she said, laughing.

Potter stopped driving her truck and riding her bike in 2018 due to eyesight limitations from macular degeneration.

“The devil gives me cancer and bad eyes at the same time,” she joked.

Jeff Konig, her best friend and truck driving partner of 32 years who retired about the same time as she did, drives her from Tullahoma to Nashville for her appointments.

“We’ve spent so much time together in that truck I think we’re like an old married couple,” he joked.

Asked if she had any advice for anyone who has been diagnosed with cancer, she said, “When you get the news — and it’s not happy news — right away you feel crushed. But go on and search for that person who can help you like I did. I have a lot of faith in these people here. I hope some day I can ride a bike again.”