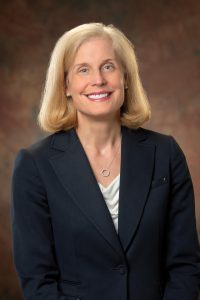 Jennifer Pietenpol, PhD, director of the Vanderbilt-Ingram Cancer Center (VICC), Benjamin F. Byrd Jr. Professor of Oncology and Executive Vice President for Research for Vanderbilt University Medical Center, is stepping down on June 30 from her long-held role as the Cancer Center’s director to focus on a combined leadership role for VUMC as chief scientific and strategy officer (CSSO).

In one facet of the CSSO role, Pietenpol, who holds the Brock Family Directorship in Career Development, will lead the organization’s scientific, technological and research strategy and operations.

In the other aspect of the role, she will partner with the CEO and other senior officers and leaders to develop, execute and sustain strategic initiatives of the highest value for VUMC.

“It is exciting to have the opportunity to step into a new leadership role at VUMC and continue to advance our strategic directions and integrate research discoveries into the care of those we serve both within and beyond our ever-growing catchment area and, importantly, make a difference in the lives of people,” said Pietenpol.

As CSSO, Pietenpol will be responsible for developing and sustaining transdisciplinary initiatives, partnerships and collaborations among VUMC’s department chairs, center and institute directors, other members of the Medical Center’s leadership team, Vanderbilt University leaders and other affiliate partners.

“Dr. Pietenpol’s assuming these new responsibilities is a natural progression, allowing full advantage of the depth and breadth of her extensive institutional experience,” said Jeff Balser, MD, PhD, President and CEO of VUMC and Dean of the Vanderbilt University School of Medicine.

“Jennifer’s prior leadership involving such a broad range of transdisciplinary initiatives makes her ideally suited for these new roles. I look forward to her partnership as we continue the important work of designing and pursuing VUMC’s future.”

During the past 15 years under Pietenpol’s leadership, VICC has seen a 100% increase in its research funding, a greater than 30% increase in its analytic — newly diagnosed or first treated — cancer patients, and 160% growth in inpatient visits.

Further, she prioritized significant growth of quantitative and cancer population sciences, including expanding its world-class cancer epidemiology program and creating a cancer health outcomes and control program. These all remain recognized strengths at VICC, with the Cancer Center a leading model of clinically integrated tumor genomics and cancer informatics.

Her investments in highly qualified deputy and associate directors, program leaders and members, as well as leading technologies and shared resources, led to three successful renewals for VICC from the National Cancer Institute as designated comprehensive status with exceptional merit ratings.

In addition, through a partnership with dedicated clinical colleagues, VICC expanded the footprint of the cancer clinic’s enterprise to seven off-campus sites in the Central Tennessee region that provide personalized cancer care closer to where patients live.

As a result, VICC is home to one of the country’s most respected and diverse teams of basic, clinical and population science investigators and clinical providers dedicated to translating discoveries to patients and the community. VICC also trains the next generation of leaders in cancer care and research.

“Providing patients the most sophisticated and nuanced cancer care is an integral aspect of our health system’s offerings. From the outset, Dr. Pietenpol has been a tremendous leader and partner, working to advance and improve an impressive array of clinical treatments and research offerings that have placed VICC firmly on the national stage. I want to express my appreciation to Jennifer for her many contributions that have advanced the lives of our patients, and I look forward to working with her in these new roles,” said C. Wright Pinson, MBA, MD, Deputy CEO and Chief Health System Officer.

During her tenure as director, Pietenpol also advanced VICC through her dedicated service to the National Cancer Program. After becoming VICC’s director in 2008, then-President George W. Bush appointed Pietenpol to a six-year term on the National Cancer Advisory Board. She has provided expertise as a member of the Blue Ribbon Panel, advising former Vice President Joseph Biden’s National Cancer Moonshot. She also served on the National Cancer Policy Forum and American Association for Cancer Research board of directors; and she currently serves as a chief scientific advisor for the Susan G. Komen Foundation.

“It has been an extraordinary 15 years, and I am very grateful for remarkable institutional support and to all my exceptional colleagues and the members of the Vanderbilt-Ingram Cancer Center Board of Overseers, chaired by Orrin Ingram II, for supporting my vision and making it a reality,” Pietenpol said.

Park will begin serving in this role on July 1, when he succeeds longtime VICC director Jennifer Pietenpol.

“I am thrilled Dr. Park accepted the director position. He will lead the next phase of Vanderbilt-Ingram Cancer Center’s trajectory, and there is no doubt the future is bright,” Pietenpol said. “Since his recruitment from Johns Hopkins in 2018, Ben has brought us new and innovative approaches to cancer care, including molecular tumor boards that are providing precision oncology for our patients both within and beyond our ever-expanding catchment area. He is a highly respected physician scientist who is deeply committed to his patients, internationally known for his research, and a leader who catalyzes collaboration and excellence.”

Park, who was named VICC’s deputy director in 2021, is an internationally recognized physician scientist who holds multiple leadership roles within VICC, including serving as director of the Division of Hematology and Oncology and director of Precision Oncology.

VICC, a nationwide leader in personalized cancer care, is at the forefront of promising new therapies, offering patients access to more than 350 clinical trials at any given time through a team of more than 200 physicians. VICC is a member of the National Comprehensive Cancer Network and is one of 51 National Cancer Institute-designated Comprehensive Cancer Centers. It is the only cancer center in Tennessee conducting research and caring for adults and children.

“I want to welcome Dr. Park into this important role on our senior leadership team. His decades of experience and distinguished accomplishments as a clinical and academic leader, including in the rapidly growing arena of precision oncology, make him the ideal person to lead our Cancer Center into the future,” said Balser.

Park was recruited to Vanderbilt in 2018 from the Sidney Kimmel Comprehensive Cancer Center at Johns Hopkins. His research team identified a high frequency of PIK3CA mutations in breast cancer that led to the development of PI3K inhibitors, approved for breast cancer by the U.S. Food and Drug Administration in 2019.

Park also pioneered cell-free DNA “liquid biopsies” that use mutations as diagnostic tools to guide therapies. His work, including the generation of genetically modified cell lines, has been widely cited, and requests for his cell lines have led to important discoveries by other investigators. He has also made fundamental contributions to the field of drug resistance, including hormone therapy resistance.

He developed and continues to lead the VICC Hereditary and Oncologic Personalized Evaluation Molecular Tumor Board (VICC-HOPE-MTB), which meets weekly to discuss challenging cancer cases from both within and outside Vanderbilt. In addition, he leads the international virtual VICC MTB, called “Our Cancer Genomes,” which meets online monthly to discuss patient cases submitted by the international cancer community.

Park is the author or co-author of more than 170 peer-reviewed scientific publications and book chapters. He also has numerous inventions and holds four patents related to his research.

“I am thrilled and honored to be chosen as the next director of VICC,” Park said. “Under Dr. Pietenpol’s leadership and vision, VICC is now positioned as the institution that provides state-of-the-art care for all patients with cancer. This stems from our ability to offer the most comprehensive diagnostic and therapeutic options for our patients.

“Our team of world-class researchers in basic science, clinical trials and health outcomes, including addressing disparities in cancer care, truly allows VICC to ‘make health care personal’ for all patients in need.”