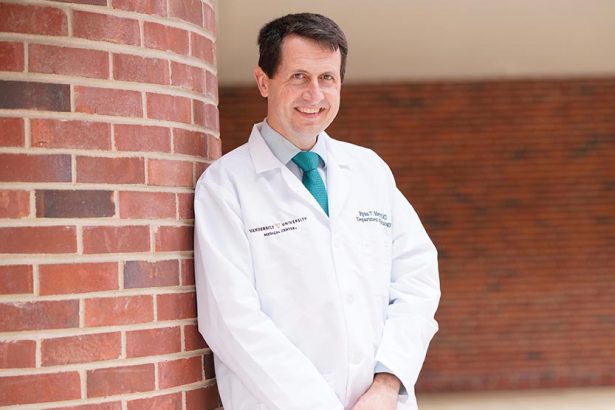 When Ryan Merrell, MD, was in his third year of medical school at the University of Alabama, he hadn’t quite decided what specialty he would choose.

Then life dealt a heavy blow, nudging him toward the field of neuro-oncology.

His father, Jim, who had recently retired from Boeing in Huntsville, Alabama, was diagnosed with glioblastoma in 2003, an aggressive primary brain tumor. The overall survival time is less than two years for most people. He died nine months later, at age 63.

Eighteen years later, being led to neuro-oncology after his father’s death, Merrell joined the Vanderbilt faculty in August 2021 as assistant professor of Neurology and director of the Division of Neuro-Oncology, leading the charge to grow Vanderbilt University Medical Center’s nationally recognized brain tumor program.

Vanderbilt’s Division of Neuro-Oncology specializes in the diagnosis and management of primary or secondary cancers affecting the brain and the neurologic complications of cancer. The division participates in a distinctive multidisciplinary neuro-oncology program that provides patients with exceptional care, engaging collaborators as well as trainees in the full spectrum of clinical and research efforts.

Merrell relives his own family’s experience when he sees patients struggling with a diagnosis of brain cancer, particularly glioblastoma. If he feels it can help, he tells them about his own experience.

“I connect with those patients, and in some cases I think it can be very helpful to tell them that I know what it’s like to lose a family member from this disease. That often doesn’t come up until the end, but I think it helps some people to have that connection.”

Merrell received his undergraduate degree from the University of Alabama in Huntsville and his medical degree from the University of Alabama at Birmingham. From 2005 to 2009 he was an intern, then a resident in neurology at the Mayo Clinic Graduate School of Medicine in Rochester, Minnesota, followed by a fellowship in neuro-oncology in Boston at Massachusetts General Hospital, Dana-Farber Cancer Institute and Brigham and Women’s Hospital.

“Originally, I hadn’t thought neurology would be one of the fields I would consider, but I discovered from my father’s neuro-oncologist that the best way to get to neuro-oncology is through a neurology residency. I’m thankful for the opportunity to have trained at two really well-renowned programs.”

After that, beginning in 2010, he was on the faculty at NorthShore University Health System in Chicago for 11 years, where he led neuro-oncology and ran numerous clinical trials for patients with brain tumors.

Merrell said one of the things he loves most about neuro-oncology is its multidisciplinary nature. “There’s a lot of interaction with people in multiple departments, the strongest of which is neurosurgery,” he said.

His close relationship with neurosurgeons at NorthShore enabled the team to find the best clinical trials for his patients, offering them the strongest opportunities for survival. He’s already solidifying those relationships at Vanderbilt with its “outstanding neurosurgeons” including Reid Thompson, MD, Lola Chambless, MD, and Peter Morone, MD, MSCI, all “highly skilled, careful neurosurgeons with good outcomes. They’re the reason patients come here in the beginning.”

Merrell said that while advancements in the field of neuro-oncology are not happening as fast as he would like, he and other neuro-oncologists see progress in the many patients who, despite terrible odds, survive.

“Even with glioblastoma, there are patients who live years after diagnosis, and some long-term survivors. We see that as progress and indicative that we’ll see bigger strides eventually.”

The icing on the cake in his new position, Merrell says, is the strong research infrastructure throughout Vanderbilt University.

“Most physicians here have research interests, and there are scientists here who can help us develop all types of research for brain tumor patients. This was the professional move I was looking for. That, coupled with the fact that I have the opportunity to build and lead a program, revitalizing it and growing it in all the different areas — that’s what appealed to me,” he said.

In the short time Merrell has been at VUMC, he’s already brought together a multidisciplinary group of clinicians and scientists within Vanderbilt  — neuro-oncologists, neurosurgeons, radiation oncologists, neuro-pathologists and neuroradiologists — all who have an interest advancing brain tumor research, and will continue to come together regularly to share information and collaborate.

One project involves using glioblastoma specimens collected from patients at VUMC to characterize the heterogeneity (how the type of tumor cells vary in different sections of a tumor) of tumor cells.

Another project is focused on intracranial meningioma. Meningiomas are one of the most common types of primary brain tumors. The World Health Organization defines meningioma as grades I, II and III. Grade I meningiomas are the least aggressive with better prognosis.

“The Neuro-Oncology group is working on a series of projects to better characterize the aggressive meningiomas and to define the timing and role of postoperative adjuvant radiation therapy,” Chotai said.

“The advanced molecular analysis is needed to better understand the aggressive meningiomas,” she said, adding that the Neuro-Oncology group is involved in a multicenter study to determine if advanced molecular analyses can be used to predict which grade II meningiomas would benefit from early postoperative radiation therapy and which would benefit from watchful waiting.

Merrell said the division will continue to add clinical trials.

In the works are two clinical trials using immunotherapy for glioblastoma and a future trial that will offer certain patients radiation brachytherapy for meningioma.

Brachytherapy is a type of internal radiation therapy in which seeds, ribbons or capsules that contain a radiation source are placed in your body, in or near the tumor. Brachytherapy is a local treatment, focused on a specific part of your body. It is often used to treat cancers of the head and neck, breast, cervix, prostate and eye.

Merrell said that he will also be partnering with colleagues in medical oncology to help design clinical trials for patients whose breast cancer has spread to the brain.

“There are many drugs being tested in clinical trials for these patients. The breast group has several currently active trials, and we will be looking for ones that I could partner with them for the future. Sadly, there are many young women with breast cancer, who are often mothers of young children, who die because of their brain tumors.”

Merrell said his goal is to allow patients with brain tumors of any type who want to be seen at VUMC the opportunity to do so.

“We want to see as many patients with brain tumors as we can, take the best care of them, and develop novel therapeutics along the way so that we can attract even more patients here.”