A cancer survivor finds solace and strength under open skies 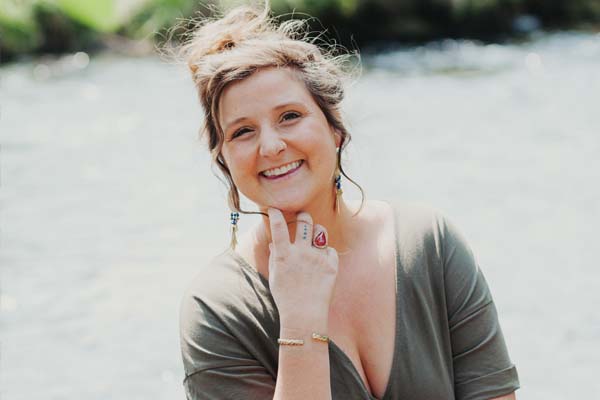 Two thousand fourteen was the best year and worst year of my life. It seemed as if all of my dreams were falling into place. I was a guide for the Outdoor Program of the University of Tennessee and had started leading outdoor excursions in the Smoky and the Blue Ridge Mountain ranges. I had finally found a way to share my passion for the outdoors with the world.

I wanted to share the majesty of the earth with others, and as an outdoor recreational guide, I took it upon myself to learn the names of the trees and plants, the stars and the history of the lands that I took students to. I wanted them to see life in definition and color. I wanted them to know that within each place they went was an energy and a life beyond comprehension of the human mind. During this time, I spent every waking hour of my life outside under the cover of tall trees. You could find me basking by rivers, boating down them and gazing at the stars. My life was full and so was my heart. It was late March when I started feeling tired.

I convinced myself that it was because I was always on the move. By June, I decided I must have mononucleosis. My friends and I joked about having the swamp flu. It never occurred to me to go to the doctor. I had just turned 21, and of course, I believed I was invincible. By August, I could hardly get out of bed. I would wake up with bruises and horrible night sweats. I wasn’t able to keep food down, much less remember anything I was being taught in school. Finally, a friend made a judgment call that saved my life. She made a doctor’s appointment for me, and the day after that appointment my doctor called and told me that the head of hematology was expecting me and to head straight to the hospital. Once I walked through those doors, my life was never the same. I was diagnosed with acute myeloid leukemia on Sept. 4, 2014.

The doctors were baffled by my ability to continue functioning in society for so long. By the time I went to the hospital my blood was 60% cancerous. They informed me that if I had waited one more week I would have died. During the days of initial testing, my family and friends were in a state of panic. The more we learned about my cancer, the more we all realized how serious it was. The doctors informed me that without a bone marrow transplant I would die.

For some reason this news, while it was scary, did not faze me. I had this feeling, this premonition, if you will, that while it would be the hardest thing that I would ever experience, that I was going to live. I think in many ways, this radical belief is what helped me survive. This unproclaimed faith helped me be fearless in a situation where some people cower in the “what ifs.” Was it logical? Probably not. But this belief held me in a space of tranquility, a space of knowingness. The brain is a funny thing — and while I remember snippets of how hard it actually was, how horrible, how uncomfortable, how sick and weak I was — what I remember most was feeling more alive than I ever had before in my life. Suddenly, everything came into a larger perspective. I realized just how amazing it was to be able to experience life in physicality, to truly be a human on this Earth. My connection to the Earth became even stronger as I realized that not only was it something that I loved, but it was something that healed my soul.

This disconnection from being in the great outdoors was the hardest part of being sick. I went from spending all my time outside to being in a small room that smelled like alcohol cleaning products, without any splash of color. Machines were constantly beeping, and the feeling of death was in the air. Living in the critical care unit, to me, felt like I had been put in a cage. I remember the first week I was at Vanderbilt Hospital I was allowed to go outside for an hour a day. My dad and I would go to Vanderbilt University’s campus and climb the Ginkgo trees. Imagine, a grown man and his daughter 30 feet up in a tree swinging from branch to branch. We started playing a game where we would climb up and be silent, and when students would walk by, we would do bird calls. To their surprise, they would find two goofy humans belly-laughing perched high up in a tree.

When the chemo started, the outdoor time stopped, and the light in my eyes started to fade away. I had an idea one day, and in a joking manner I told my mom that it would be fun to make paper cutouts of myself, so I could send them to friends and family and have them take pictures of them with me on their adventures. This way, I could feel like I was there. To my surprise my mom ran with the idea and printed hundreds of stencils of me and dubbed them “Adventure Alle.” Through the entirety of my treatments, I received pictures of friends, family and people I didn’t even know taking “Adventure Alle” on their trips. Even though it wasn’t the same, I felt like a part of me was there — out in the green grass, going down rapids in my kayak, looking out at the vast expanse of the mountains. It was like I could almost taste it.

There was a point in my treatment where I got an infection in my colon, called typhlitis. I had a very high fever and was on the brink of leaving this world behind. It was a medical miracle that the doctors and nurses were able to bring my fever down. After this experience, a piece of me faded. I grew angry and tired. Angry that, at 21, I was facing one of the worst cancers one could imagine. I was angry that I had almost died of an infection rather than dying of the cancer itself. I felt like the fight was in vain, and I just wanted to drift away — to not have to fight anymore. I was tired. And I longed to be outside under the canopy of the sycamore trees. I missed dirt. I missed rushing water. During this time, I had practically nonexistent immune system, and I wasn’t even allowed to have a plant in my room because I could get sick from it. That made my heart hurt more than anything.

I had a very intuitive doctor who took the time to know me well enough to understand that my heart lived and breathed for the Earth. After typhlitis, he noticed the change in me and grew worried. One thing that is almost more important than chemotherapy is vitality, and the will to live. He saw that my spark, my fight, was fading, and he decided to do something about it.

One day, he came into my room and told me that I had been cleared to go off the floor. I looked at him confused and uncertain by what he meant. He smiled a wry smile and told me that today my treatment was to go outside and to touch a tree. Again, I was confused. After all, going outside could kill me. He answered with the purest words I’ve ever heard in my life, “I am afraid that if you do not go outside, that you will die anyway.”

That doctor changed the course of my life, and in some ways, I truly do believe that he helped me escape the looming grips of death that hovered over my own feelings of self-proclaimed defeat. Over the course of the next few weeks, my vitality came back. My joy and my zest for life returned.

A few weeks later I was declared cancer free, and I was able to go home and wait for my bone marrow transplant. I was scheduled to have my transplant in January 2015. During the reprieve of not having chemotherapy, I went to Knoxville to be with my friends. We kayaked off a 12-foot waterfall, went rock climbing, hiking, rode bikes and laughed as hard as we could. Even with cancer, nothing could stop “Adventure Alle” from playing in the best playground imaginable, Mother Earth. My thought process during these times was one of radical vindication. “If I die, at least I died having the time of my life.” This felt like a safe thing to say, considering my transplant was right around the corner.

Two days before I was set to leave for my transplant, I received a phone call that made my heart skip a beat. My bone marrow match had fallen through. Through my tears and sobs of sorrow I decided that if I was going to die, I was going to die well. And so, with the support of my friends, my outdoor adventures continued. While I was on a camping trip, I received another call; the Be The Match bone marrow registry found another match for me. Exactly one month later, I received my transplant.

I learned a few years later that my experience was truly something that people would call a modern-day miracle, and if you don’t believe in miracles, you could just call me lucky beyond belief. My team at Vanderbilt told me that I had had 10 perfect donor matches for my genetic biome. Some people can only find one, or can’t even find a person who matches their genetic markers completely, and in worst case scenarios cannot find a match at all. To find 10 people across the world who are a perfect fit to save your life is unheard of. I was told that nine of these potential donors fell through, and the 10th was the one who saved my life. To anyone in the world who has ever wanted to make a difference, this is a profound way to do it. Please, for the sake of all the people who haven’t lived because they couldn’t find a match, sign up to be a donor with Be The Match. Sign up to save a life.

It’s six years later, and I have to admit, it is not easy being a young adult who has survived a nearly unsurvivable cancer. I lost many friends along the way, and for years struggled with survivors’ guilt and mental health issues that stemmed from the chemo and radiation. I am grateful for my experience because it has made me who I am today. But behind the rose-colored glasses, I still struggle. Life is not the same after cancer. I live with chronic pain and chronic fatigue. And yet, to this day, nature has been my saving grace. It is where I go to heal. And now, instead of romping, I sit. I sit and I listen. I become one with the stillness of this beautiful place we have the pleasure of calling home. Nature is the most pure, free and easy access we have to healing our mind, bodies and souls. This is why I have dedicated years of my life to finding ways to connect people to the wildness of our world. It is my belief that nature can heal almost anything, and because of this, I have made it part of my life mission to share this with others.

Previous Post: Why are young people getting colorectal cancer?