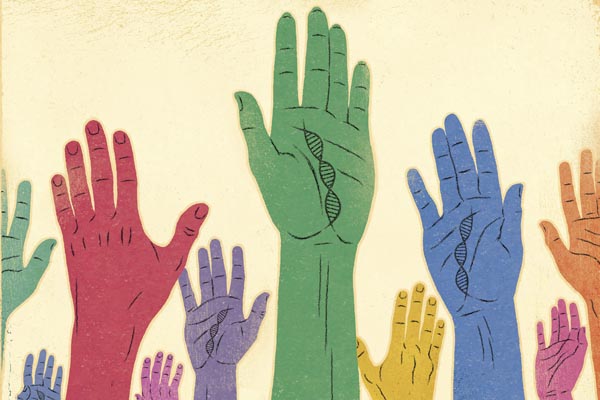 John Joseph Heirigs either built or preserved some of the most iconic landmarks in Memphis. His construction company erected the Egyptian-themed entrance to the zoo and renovated the historic buildings along Beale Street. An avid outdoorsman, he set the state record in 1962 for bagging a white tail deer, and he spent weekends with his family fishing on an Arkansas lake.

His son, Jim Heirigs, followed in his father’s footsteps, working in the construction business, angling for bass and scouring the forests for bucks.

He also had a similar medical journey. Like his father, he developed prostate cancer. So did his brother. Some families have higher genetic odds for the disease, but very little is known about hereditary prostate cancer risks.

New research by investigators at Vanderbilt-Ingram Cancer Center sets the stage for physicians to better distinguish which men have the highest risk levels so those men can be more closely monitored. The researchers identified haplotypes, the variants on ancestral pieces of DNA that are associated with hereditary prostate cancer, in a first-of-its-kind genomic study made possible by tissue donations from prostate cancer patients with family histories of the disease.

Descendants of his family and many others could potentially benefit from this study, which began years before Jim Heirigs was diagnosed with prostate cancer.

The researchers created an algorithm and proved in this first presentation-of-concept study how these ancestral fragments of DNA could be analyzed to evaluate risk. The results of the study were published March 23 in Nature Communications. 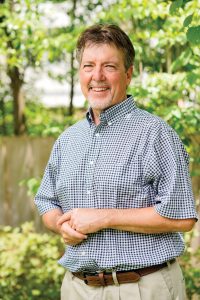 “If I had to do it
all over again, I wouldn’t even think twice about it. I owe all that to Dr. Chang and the people at Vanderbilt.” Photo by Donn Jones.

“In the general public, I don’t think people have any idea of the amount of risk,” Heirigs said. “I sure didn’t. I thought I had a little bit more risk, but it can actually be a lot more risk.”

The researchers analyzed tissue samples collected for the Nashville Familial Prostate Cancer Study in an investigation comparing men with prostate cancer, each from a separate family with a strong history of the disease, to screened men without a personal or family history of prostate cancer. They analyzed haplotypes at a location of chromosome 8, which has been tied to the origin of prostate and numerous other cancers.

In total, the researchers identified 183 variants associated with hereditary prostate cancer at genome-wide significance, including many that had never been previously reported.

“We’ve taken a comprehensive shotgun approach to investigate data at this (chromosome) location and have been able to deconstruct how it contributes to risk, including which of the haplotypes impact age of onset and also aggressiveness,” said the study’s senior author, Jeffrey Smith, MD, PhD, associate professor of Medicine. “Almost 2,300 men with the Nashville Familial Prostate Cancer Study, each with a desire to help others, contributed.”

Data from a separate, even larger study of hereditary prostate cancer by the International Consortium for Prostate Cancer Genetics confirmed observations. The study is believed to be the first to identify haplotypes comprehensively from all associated genetic variants at a locus or chromosome position. The study introduced new methods for finding genetic variants most contributing to risk.

“A challenge of genetic epidemiology is that many genetic variants are highly correlated with each other, which causes multiple variants to detect the same underlying causal risk factor,” said the study’s lead author, William Dupont, PhD, professor of Biostatistics and Preventive Medicine. “We have developed a new algorithm for detecting sentinel variants that are associated with distinct causal genotypes. An additional strength of our study is its use of haplotype analyses that have increased power to detect true risk signals when the causal variant has not been explicitly identified.”

One of the study’s contributing authors is Sam S. Chang, MD, MBA, the Patricia and Rodes Hart Professor of Urologic Surgery, who performed Jim Heirigs’ surgery in December 2019. Heirigs sought out Chang after doing some research and reading an article about him. At age 50, Heirigs had started undergoing yearly PSA (prostate-specific antigen) screenings, a blood test. 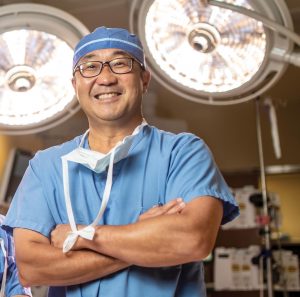 “When I was 59, my PSA became somewhat elevated and by the time I reached 60, it had become and stayed elevated,” Heirigs said. “That’s when I turned to Dr. Chang. Over the next year, Dr. Chang did a PSA test and it was still high, so he ordered a biopsy. The biopsy came back as generally OK, but Dr. Chang noticed a couple of cells he was concerned about. I sometimes think that without Dr. Chang’s expertise in noticing this slight abnormality, my cancer could have been missed. We did another biopsy a month later, and this confirmed cancerous cells. I was nervous as I could be. Having cancer, you start thinking what that could mean, what could happen. Then you read a little too much on the internet.”

Heirigs talked over the options with his wife, Alissa Heirigs, and decided on surgery.

“Dr. Chang was fantastic,” he said. “He first explained to my wife and me what the prostate is, its location, function, what the cancer is and does, my particular cancer, its level, the medical options available and the risks and benefits of all options. It was complete medical information but on a level we could understand. He then answered all our questions. The man is world renowned, so he has to be busy, but he was never in a hurry and always asked if we understood. It was like talking to a trusted friend. We then asked for his opinion, and we agreed with him and selected surgery. His demeanor put us at ease. You could tell he really cared. We walked in scared to death and walked out confident because of him. The level of care by everyone at Vanderbilt was wonderful and so much more than what we expected.”

Heirigs said he’s had no complications from the surgery.

“It couldn’t have gone much better,” he said. “It was a little bit of a challenge the first week or two. I’m a bit of an advocate now. When I talk to men of my age and if the subject comes up, I urge them to get tested, and if you have to have it removed it’s not that bad. There are always exceptions to everything, but as far as what happened with me, if I had to do it all over again, I wouldn’t even think twice about it. I owe all that to Dr. Chang and the people at Vanderbilt.”

The Nashville Familial Prostate Cancer Study was initiated in 2003, and patients from both Vanderbilt University Medical Center and the adjacent Veterans Administration hospital were recruited from then until 2009. Of those participants, 91% were of European descent and 9% were African American, a population that has higher incidence rates for prostate cancer and higher death rates for the disease than white men. The Vanderbilt University Human Subjects Research-Institutional Review Board set the rules for the study, which required that participating families not be identified.

“Patient participation in research trials, such as this that will increase our knowledge of disease and improve treatment choices, should be encouraged,” Chang said. “These men in particular should be applauded for their selflessness and willingness to help others.” 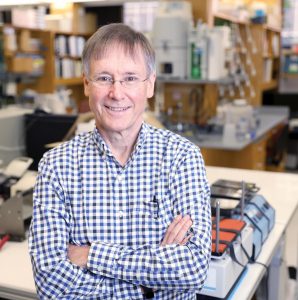 William Dupont, PhD,
professor of Biostatistics and Preventive Medicine, (left) is the lead author of the study that delved into hereditary prostate cancer risks. Photo by Erin O. Smith.

Smith and Chang along with Joseph Smith Jr., MD, the William L. Bray Professor of Urology, and Michael Cookson, MD, recruited patients and are co-authors of the study. Their work received funding support from the U.S. Department of Veterans Affairs, the V Foundation and the National Institutes of Health.

One of the haplotypes identified in the Vanderbilt study was associated with younger age of diagnosis. The mean age at diagnosis for carriers was 1.4 years younger than comparable non-carriers, who also had a family history of the disease. The age difference was more striking relative to men in the general population, seven years younger than the United States and United Kingdom average. This age disparity is important because men of younger ages may miss an early-stage diagnosis, lessening the likelihood of successful treatment.

A few mutations in particular genes — BRCA2 and HOXB13 — had been previously linked to inherited prostate cancer.

“There were really very few similar high-risk, genetic mutations that were known that essentially cause familial prostate cancer. Some of those are tested clinically,” Smith said.

The study by Smith and his colleagues identified additional genetic risk factors.

“In particular, there are two in this paper that are probably worthy of inclusion in testing panels,” he said. “This particular paper features their discovery. Our investigation has not gone down the road of utility for clinical application yet, but these are in the realm of strong risk factors that are likely to impact future clinical care.”

The Vanderbilt haplotype study differs from prior investigations of risk factors that typically focus on specific mutations or perform a genome-wide association study (GWAS). A GWAS looks for genetic markers that can be used to predict disease risk by searching the genome, the genetic material of people, for small variations called single nucleotide polymorphisms (SNP) that occur more frequently in people with a particular disease. The Vanderbilt haplotype study was conducted specifically among men with a strong family history of the disease to discover its strongest heritable causes, and comprehensively discovered such individual risk variants but also their overall organization, how they are transmitted together on a chromosome that is passed from one generation to the next. 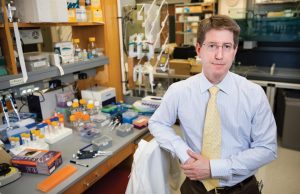 Jeffrey Smith, MD, PhD, is studying how ancestral fragments of DNA can be analyzed to evaluate risk of prostate cancer. Photo by Susan Urmy.

To the researchers’ knowledge, no prior investigation had reconstructed haplotypes comprehensively from all associated variants at a GWAS location or explicitly used linkage disequilibrium patterns — the tendency of adjacent genetic variants to be inherited together rather than independently — to identify cancer risks.

“These are pieces of DNA that are passed along generations of a family,” Smith said. “Ours is the first such study to do this.”

Jim Heirigs said he plans to make sure his children, grandchildren, nieces and nephews understand the importance of male descendants being screened for prostate cancer.

“After talking with Dr. Smith, I know it’s not just an elevated risk or a little more risk; it can be a lot more risk,” he said. “They need to be tested, and they need to keep a vigilant eye on it.”