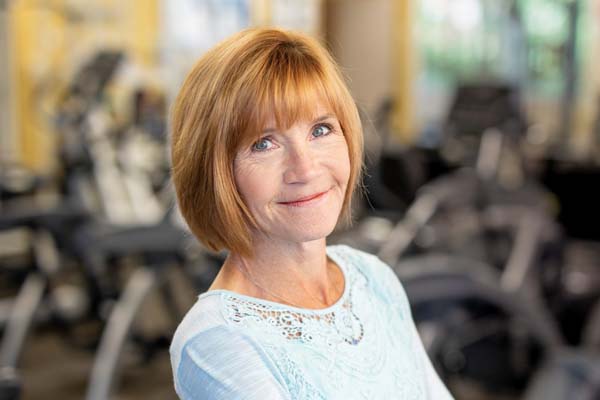 At first glance, it looks like an ordinary workout gym — cardio machines, a running track, even a pool. Then you notice that some people are wearing masks.

It’s a Monday morning in the Vanderbilt Dayani Center for Health and Wellness, where three  patients are starting their day. Each was diagnosed with acute myeloid leukemia (AML), received a life-saving stem cell transplant less than 10 weeks ago and is on the road to recovery.

The road to a physical recovery is difficult with a compromised immune system and a daily regimen of strong anti-rejection drugs. Many AML patients led active lives before their brush with cancer, and they now find themselves recovering their strength and stamina. Mentally, it’s difficult to be away from their homes and families for months while their immune systems recover.

That’s where Karen Dyer Young comes in. She cares for patients and members of the Dayani Center who have or are recovering from cancer or a stem cell transplant. During their visits a few times a week, her goal is to help not only restore their strength, but also their spirits.

“They’re socially isolated for this first 100 days after a transplant,” said Young, coordinator of Health Promotions Programs at the Dayani Center. “They’re not supposed to be around kids or any family members that might be carrying an illness. It can be a pretty isolating time for them. Plus, they need a break from their caregivers. This may be a family member, somebody that they really love, but they’re in a small apartment with this person 24/7. It can be pretty tough on them.

“The reason that we started the program years ago is because these patients were sitting around in their apartments with their caregivers,” she said. “They can’t be around large groups of people, so they can’t go to a regular gym. Depression was really high among them.”

Working out on an exercise bike in August 2018 at Dayani, Deborah Shelton recalls the day her cancer journey began, a week before Christmas 2017. She had just recently returned from six months of hiking through Texas, New Mexico and Colorado. Her pace hadn’t slowed much since she returned to her home near Tampa, Florida.

“I got up that day and I rode my bicycle 5 miles, went Christmas shopping and came home and couldn’t walk up my 13 stairs,” she said. “And I thought maybe I overdid it. The next day, I noticed that I couldn’t walk up the stairs and I was short of breath. The next day, when I woke up, I had a strange rash from my knees to my ankles.”

That was a Friday. She made an appointment with her doctor the following Monday. “When I got there, my doctor said, ‘I don’t know what’s wrong with you, but you’re going to the ER right now.’ Within six hours I was diagnosed with AML. Within 24 hours I was at the Vanderbilt ER.”

Shelton said a nearby hospital in Florida couldn’t guarantee when she could be treated. So, she was driven straight to the Vanderbilt Emergency Department — a 14-hour drive.

AML is a cancer in which abnormal cells rapidly develop in the bone marrow and is likely fatal if not immediately treated. Stem cell donors give patients a second chance at life. All Shelton knows about her matching donor is he is a 22-year-old man.

“We have absolutely no regrets about making the trip to Vanderbilt,” she said. “The team from the ER to the hematology clinic, the transplant team, the Dayani Center — everybody has been wonderful. I don’t think I could have gotten better care anywhere else.”

Shelton’s cancer is now in remission, and she says her workouts at Dayani are making a difference. She can make six laps around the track at Dayani Center and handle 20 minutes on the exercise bike. When she started here, she was doing five minutes.

“They’re getting me ready to go home,” said Shelton, nine months after her diagnosis and subsequent treatment. “It’s a very good feeling.”

Young said her first role with the patients is sort of a sales job. “We have to convince them that they’re going to feel better if they do it,” she said. “There are good days and great days, and some days are just plain days. If they can just make it in the door and walk a couple of laps around the track, that makes us happy too.”

Young tailors exercises to improve strength in particular areas, with an eye toward preventing the risk of falls.

Marshall Tipton has been walking around the Dayani Center’s track with Young. “I’m here three and four days a week,” he said. “It’s really helped a lot.”

Before his diagnosis with AML in November 2017, Tipton led an active life as chief engineer for Bristol Broadcasting, which operates 21 radio broadcast stations in Illinois, Kentucky, Tennessee, Virginia and West Virginia and is headquartered in Bristol, Virginia. Tipton’s job took him to transmitter sites on several mountains around the Tri-Cities area of Tennessee, ensuring the equipment was working properly.

His diagnosis came during a blood count at an appointment with his primary care doctor. He went to the hospital the same day. “My world was literally changed in a moment,” he said.

Now in remission, he said the 70 days in the hospital took a lot out of him. “You lose so much muscle mass,” he said. His strength is returning, he said, as he worked out on an elliptical machine, lifted weights and practiced balance exercises.

She said her goal is to increase the repetitions of exercises “when it becomes too easy” for patients.

“You never make it too easy,” joked Tipton.

Billy Guffey of Hilton, Virginia, was diagnosed with AML in April 2017 and spent time in a hospital in Knoxville before coming to Vanderbilt. “When I was fresh out of the hospital, I didn’t have any strength at all,” he said. In August, he was logging a mile on cardio equipment. He said it feels like his strength is returning, and he was looking forward to going home.

That’s what the stem cell program at the Dayani Center is all about.

“When they come in, I tell them they’re in training to go home,” Young said. “We do it in a fun way. We want them to meet each other. A lot of times when you’re sitting in a cancer clinic in a waiting room or a stem cell clinic, people don’t talk. Everybody’s waiting to hear the news. Was their last biopsy good? It’s kind of a tense environment in there. In here, we want it to be much more fun.”