VICC’s top nurse crossed an ocean to achieve her dream 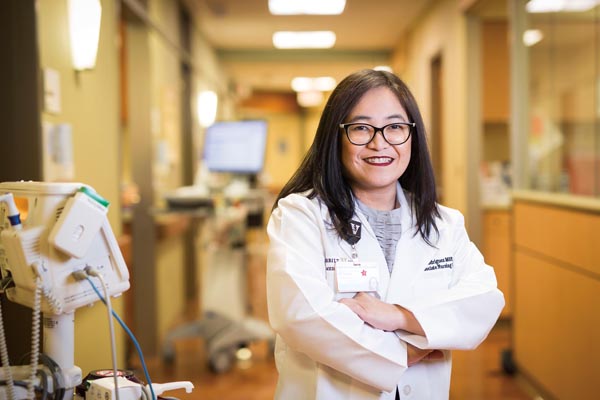 Vanderbilt-Ingram Cancer Center (VICC) has 343 full-time equivalent nursing and ancillary positions, and one administrator responsible for their work. She is Anna Rodriguez, MSN, MHA.

“What I really like about the leadership role is problem-solving, taking complex issues and developing solutions with the team,” said Rodriguez, who became associate nursing officer of VICC in mid-2016.

“The needs of my patients in the critical-access hospital were much different than those of patients that I had in the university setting, where a majority were affluent. We have the obligation to deliver that same quality of care to cancer patients, regardless of whether or not they can afford their care.

At Mount Sinai, the majority of our patients were without means. They had transportation issues, they had to deal with deciding whether or not to miss work to get their treatment and whether to buy maintenance medications or use their money for day-to-day sustenance and living.

“That’s where I developed a lot of passion for ensuring that cancer patients get the care coordination and support they need to navigate through the complexities of their care. There are a lot of psycho-social issues that our patients are dealing with, and the question is how can we as healthcare workers address those needs while providing the best care and treatment.”

Rodriguez grew up in Baguio City, elevation 5,050 feet, known as the Summer Capital of the Philippines. Her father was a driver at a nearby U.S. naval base and her mother was a homemaker. Rodriguez recalls deciding early on that she would one day live in the United States. “I remember as a child reading old books, and there was one in particular, it must have been a geography or history book that had all of the different U.S. states. I distinctly remember deciding then that I was going to be in the United States.”

Following high school, she entered the baccalaureate nursing program at Saint Louis University in Baguio City. After college, board certified in both nursing and midwifery, she worked in Manila at a maternity hospital and taught at a midwifery school.

“I look back at how young I was at that time and how young my students were; I was teaching 17-year-olds to deliver babies. I was fortunate to have that experience.”

In 1995, to secure employment at a long-term care facility in Chicago, Rodriguez paid a job placement agency $3,500, a major investment for someone working at that time in the Philippines. She worked at the facility as a nurse assistant pending Illinois nursing board certification and licensure.

“Again, that’s a life experience that I value because, as a nurse administrator, I can appreciate the difficult work that our nurse assistants and patient care technicians perform in the units.”

The job was her first time out of the Philippines, and her introduction to long-term care  — and snow; there’s neither in the Philippines. “That was a huge lesson for me I guess, seeing older patients being placed in long-term care facilities. Culturally it’s just different.” While still working as a nursing assistant, she met the man she would marry, Joseph Rodriguez, a Chicago native. They have two daughters, Kathleen, 16, and Kirsten, 14.

Within eight months of her arrival in the U.S., Rodriguez sat for the board exam and secured her Illinois nursing license. She next accepted a nursing position at an acute rehabilitation facility in Chicago.

“After that I outlined my goals. I really wanted to go to a university hospital and see how well I could do. We would often hear, ‘Hey, there’s this hospital downtown, Northwestern, and it’s pretty tough to get in.’ I looked at it as a challenge, to see if I could get in, and I was able to. That was my first exposure to oncology.

I had no idea what stem cell transplantation involved, but I chose that path because I knew that it would be something that would likely be fascinating and would give me a lot of different learning opportunities.”

At Northwestern Memorial, Rodriguez advanced to charge nurse, then unit manager. She later moved to leadership roles at Mount Sinai, and then at Presence Resurrection Medical Center, also in Chicago. She obtained her master’s degrees in nursing and health administration from the University of Phoenix while working full time.

“As a nursing administrator, I believe that if I ensure that nurses have the equipment that they need to do their job, if I ensure that nursing staff are elevated, and that we develop them professionally, that will translate to exceptional care at the bedside. While I am removed from direct bedside care, I feel that I still have the ability to influence the quality of care that’s provided to our patients.”

In 2015, she returned to the Philippines for an extended visit with her mother, whose breast cancer had recurred after a lengthy remission. (Her father had died in 2008.) Her mother died a month after Rodriguez returned to the U.S. “I cherish those weeks I was able to spend with her,” she said.

Rodriguez was lured to VICC by the prospect of returning to cancer care in an academic setting. “We have world renowned researchers who are making groundbreaking discoveries in cancer care. It’s a privilege to work alongside scientists who are finding cures for cancer.”