Douglas Morgan, MD, MPH, started working in Honduras after college as a Peace Corps engineer. He returned — after training in public health and gastroenterology — as a physician.

“The healthcare needs that I observed as a Peace Corps volunteer triggered my interest in a career in medicine,” says Morgan, associate professor of Medicine.

When Morgan “reconnected” with Central America as a volunteer physician in the aftermath of Hurricane Mitch in 1998, he was “impressed by the burden of gastric cancer there and the dedication of the talented local physicians,” he says. “Those physicians became collaborators we’re still working with today.”

Through a network of collaborations, Morgan and Vanderbilt colleagues have developed a platform for gastric cancer research built around molecular epidemiology, chemoprevention and technology. These initiatives also provide research and clinical experiences for Vanderbilt trainees and augment the clinical services for the local patient populations. 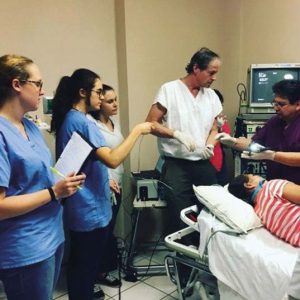 Dagoberto Estevez-Ordonez, a native of Honduras who graduated from Vanderbilt University School of Medicine this year, spent 10 months conducting research in Honduras.

“I am interested in global health and was intrigued by the model Dr. Morgan has built,” Estevez-Ordonez says. “He built research infrastructure, and patient care and other clinical groundwork naturally followed. The endoscopy suite at the rural hospital in Honduras where the Vanderbilt studies are conducted is one of the best in the nation.”

The hospital in Honduras is one of the sites where Morgan and Keith T. Wilson, MD, are overseeing two gastric cancer prevention trials in patients with precancerous lesions — one of the compound DFMO (see main story) and another of a bioavailable form of curcumin, a biologically active component of the spice turmeric.

“The hope is that we will find a medication with a low side effect profile that will prevent the transition to gastric cancer,” Morgan says.

During his time in Honduras, Estevez-Ordonez worked with Ricardo Dominguez, MD, and Morgan to conduct a gastric cancer survival study. The team followed up on patients diagnosed with gastric cancer between 2002 and 2015, sometimes hiking across swinging bridges and up boulder-strewn paths to track down family members.

“It could take anywhere from one to 15 hours to reach patients or their family members,” Estevez-Ordonez says.

“This is the first study to look at the reality of gastric cancer survival in rural populations in Latin America,” Morgan says. “It has underscored the grim reality and will help target areas for improved cancer control.”

Estevez-Ordonez also began the process of establishing a cancer registry, which did not exist, for Honduras.

“Moving forward, 70 percent of the

cancer in the world will occur in the LMIC setting, and with a very modest investment, we can have a huge impact on the populations.”

Next Post: VICC’s top nurse crossed an ocean to achieve her dream