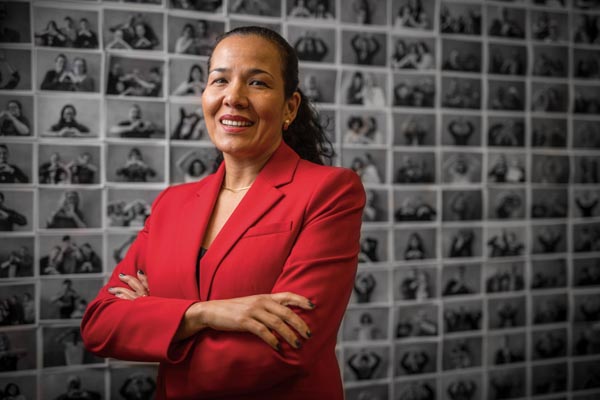 Claudia Barajas knows health disparities in the Hispanic/Latino and African-American communities will not be resolved simply by having patients come to Vanderbilt-Ingram Cancer Center (VICC). To address those disparities, she must go to them.

Barajas is a community health educator who leads the Healthy Communities Program, offering culturally appropriate cancer prevention education and information about the benefits of participating in cancer clinical trials.

“I do that through ongoing engagement,” said Barajas, who works with three part-time health promoters called promotoras, lay workers who have basic training to help people from diverse communities achieve better health. “The promotoras and I are in the community establishing relationships with people and creating new partnerships with organizations interested in the health and well-being of diverse populations.”

Her mission with the VICC Office of Community Outreach Education and Affiliations takes her into community-based organizations, churches, homes and federally qualified health centers. It takes the form of town hall meetings, face-to-face and group education and social media postings. Last year, 7,211 people from Nashville’s Hispanic/Latino and African-American communities participated in 85 outreach and educational activities.

Barajas attends coalition meetings related to health equity, serves as a board member for two nonprofits and is frequently invited as a guest on Spanish-language radio shows to talk about cancer prevention and the importance of early detection screening.

When the venue attracts more than 30 people, she will often bring a Vanderbilt physician or nurse practitioner to present health information. In October, Raeshell Sweeting, MD, instructor in Surgical Oncology, spoke about triple-negative breast cancer, which disproportionately affects African-American women. In January, Ronald Alvarez, MD, MBA, Lonnie S. Burnett Professor of Obstetrics and Gynecology and chair the department, spoke to members of the Hispanic/Latino community about HPV-associated cancers with the assistance of a Spanish interpreter.

Barajas focuses on the five most prevalent forms of cancer that affect both communities, though in different order — lung, cervical, breast, prostate and colon. Each community has its specific challenges. In the African-American community, men are 24 percent more likely to die of cancer than white males, and women, 14 percent more likely than white females, according to 2012 data from the American Cancer Society. A 2015-17 report from the same source showed that Hispanics/Latinos tended to have low rates of the most common cancers (female breast, colorectal, lung, and prostate), but they are more apt to be diagnosed at a later stage. Hispanics/Latinos also have high rates of stomach and liver cancers, and Hispanic/Latina women had the highest rates of cervical and gallbladder cancer when compared with whites and African-Americans.

In the foreign-born Hispanic/Latino community, the key issues are language barriers, lack of access to health insurance, transportation, lack of trust due to immigration status and isolation from the general population. In the African-American community, there are issues of trust in the health system due to negative past experiences. Tailoring programs and considering health literacy are needs in both groups.

“The approaches are different for both communities, and we have to be aware of that and be sensitive to that in order to be effective delivering health messages to each community,” Barajas said.

The goals are cancer prevention, early screening and early detection. Adults are the focus of the program, but children and families are considered as well. Topics such as tobacco prevention touch both groups. Children can also be advocates for their parents and can help overcome language barriers in their homes.

“If people take responsibility for their own choices, get adequate nutrition, have frequent physical activity and start taking care of themselves when they are young, it will help with health outcomes later in life. It may not stop people from having cancer, but if it’s detected in early stages, people will have more options for treatment, and they will be able to live longer,” she said.

Her work has made a difference. Last year, 841 women attended breast and cervical cancer education activities, and 85 women who participated in Healthy Communities programs were referred to and received a mammogram screening and a well-woman checkup at the Matthew Walker Comprehensive Health Center. And 97 people received one-on-one or group tobacco education, with 33 being referred to the Tennessee Tobacco Quit Line.

Barajas joined VICC in 2015, after 17 years of directing similar outreach programs for the Hispanic/Latino and African-American communities in Oklahoma City, Oklahoma. “I got involved with Vanderbilt because I’m very passionate in the area of health disparities providing access to health services to underserved communities,” she said. “When I moved to Nashville, I started getting involved with health organizations, and I saw a huge need for providers to tailor health programs specifically for diverse populations, provide cancer prevention education in Spanish as well as English and refer patients to services available for them.”

Nashville’s Hispanic/Latino community is primarily from Mexico but includes significant populations from Central America, Cuba, Puerto Rico and Colombia, where Barajas was born before moving to the United States 27 years ago.

The concept of promotoras has become entrenched in the Hispanic/Latino community over the last few decades. They are trusted, trained mentors for better health. Barajas oversees three of them who each work 10 hours per week from their homes. They set their schedule, visiting churches and community centers and becoming embedded in the community.

“They receive training in the areas of education that we provide, in this case, breast cancer, cervical cancer, lung cancer and colorectal cancer,” she said. “They have a passion for helping people, and they’re well connected with their community. In most cases, they are the leaders of their community.”

In the Hispanic/Latino community, the American healthcare system can be very intimidating to navigate, in addition to the language barriers, she said. The majority of the Hispanic/Latino people come from countries where the government provides universal access to healthcare, or affordable healthcare, where providers are local, familiar and engage patients in their care, and where a language barrier does not exist. Overcoming those challenges means establishing trust.

“That’s the key,” Barajas said, “to increase the trust of the people by becoming part of their communities, creating partnerships with church leaders to be able to bring the cancer prevention messages. Using this approach, the message will be well-accepted by the community when it comes from somebody they know.”

Barajas is eager to enlist physicians and researchers at Vanderbilt University Medical Center to accompany her and the promotoras.

“We are looking for volunteers, especially physicians who are bilingual,” she said. “I enjoy mentoring researchers because I see a great need among researchers to engage with community members to create awareness about their projects and to understand that after good engagement with the community there are great opportunities for recruitment. We should not market research; we should create awareness about research by engaging with people.”