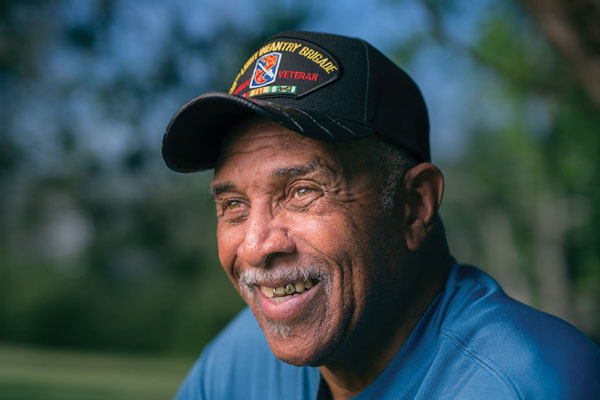 Van Edmundson had been diligent in getting routine colonoscopies, beginning at age 50, so when his doctor asked him to get a new scan after he began having shortness of breath and developed anemia, he was happy to do so. The colonoscopy revealed a small, cancerous mass. Now, four years after surgery to remove the cancer, the Ashland City, Tennessee, resident reports back to Vanderbilt University Medical Center (VUMC) for annual colonoscopies and recommends the screenings to all of his friends.

Edmundson is a walking example of how early cancer detection saves lives. He crossed off an important item on the checklist of actions people can take to prevent and find cancer early before it causes symptoms or spreads to other parts of the body. Most actions are less invasive than a colonoscopy and often take only minutes. The checklist includes vaccines that actually prevent the development of certain cancers.

“I think people recognize that it’s hard to cure cancer—it’s hard to stop a train that’s going at full speed,” said Pierre Massion, M.D., director of the Vanderbilt-Ingram Cancer Center (VICC) Early Detection and Prevention Initiative. “You’d rather not have to deal with that train at all.”

In the past, most of the focus on cancer has been in risk prevention and treatment, but less had been done in the area of early detection. That was because effective early detection tools had not been developed, Massion said, and much of the research investment was focused on therapeutics—in treating the disease—as opposed to diagnostics.

“We have more time at the early detection and prevention stage than we have when you have cancer,” said Massion, Cornelius Vanderbilt Chair in Medicine. “When you have cancer, you want to take it out and begin any needed treatment rapidly. When someone is at risk for cancer, we have a fairly large window of opportunity to intervene or prevent it before the tumor develops, as this process is rather slow.”

Electronic reminders for screenings sent to people from their health care providers may improve compliance, especially for those most at risk, Massion said. At VUMC, an initiative known as Bridge was launched in 2016 that includes notifications to primary care clinicians when patients coming in for an appointment have not had needed screenings such as a mammogram.

“We need to implement evidence-based cancer prevention and screening programs in the population at large,” he said.

The field of diagnostic medicine is continually improving, and many research studies are underway to measure the efficacy of existing surveillance programs, both in catching cancers early and in preventing deaths from cancer. Scientists are also developing new screening and prevention tools. Continued advances in precision medicine are allowing physicians to better identify individuals most at risk for developing cancer and to develop customized interventions.

“It’s incredibly tragic when someone gets cervical cancer that could be prevented by either the appropriate vaccination or screening for the cancer,” said Ronald Alvarez, M.D., MBA, chair of the Department of Obstetrics and Gynecology and Betty and Lonnie Burnett Professor of Obstetrics and Gynecology. “As a health care provider, one of the most tragic things I’ve seen over the course of 25 years of practice, is to watch women, usually with young children, die and miss out on all these great life events because of cervical cancer.”

The HPV vaccine is one of two cancer-preventive vaccines available in the United States. It protects against most head/neck, anus/rectum, penile, cervical, vaginal and vulvar cancers. The other vaccine prevents hepatitis B virus (HBV), which causes liver cancer. 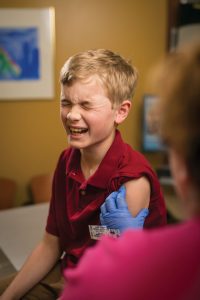 Rhys MacMillan, 13, receives the first of two rounds of HPV vaccines at University Pediatrics in Nashville. Had his parents waited until he was 15 or older, he would have required three rounds. Photo by Daniel Dubois.

Cancer-preventive vaccines are made using antigens from the viruses that cause or contribute to cancer development, and because only a part of these viruses is used, the vaccines cannot cause disease.

In October 2016, the Centers for Disease Control and Prevention’s Advisory Committee on Immunization Practices updated the HPV vaccination guidelines. Girls and boys should still receive the HPV vaccine with the first shot being received at age 11-12 when their bodies will have the best immune response, but under the new recommendations, those who start the vaccine series before they turn 15 will need just two doses instead of the previously recommended three. Between the ages of 15 and 26, you need three shots to complete the series.

Despite the vaccine’s effectiveness, HPV immunization rates in the United States have been slow to increase, with only 42 percent of girls ages 13 to 17 and only 28 percent of boys having received the full vaccine series, said Pamela Hull, Ph.D., assistant professor of Medicine at VUMC and researcher on HPV vaccine compliance.

She is working with pediatric health care providers in Tennessee on developing ways to better communicate to parents the importance of having their children vaccinated at the appropriate age so they will be protected later in life.

The HBV vaccine prevents chronic hepatitis B infection, which is believed to be the cause of 50 to 60 percent of all hepatocellular carcinoma (liver cancer) worldwide. Children should receive their first dose of hepatitis B vaccine at birth, completing the vaccine series by 6-18 months old. A “catch-up” vaccination is advised for children and adolescents who were never vaccinated or who did not receive the entire vaccine series.

People at higher risk for skin cancer (those who work outdoors, are fair skinned or have a personal or family history of skin cancer) should do a monthly self-check and have their doctor do a thorough screening annually, said John Zic, M.D., professor of Medicine/Dermatology.

With self-checks, use the “ABCDE” rule:

Also, look for new spots or spots that don’t resemble the others on your body, slow-healing sores, moles that itch or hurt or that have redness or swelling, and any spots/moles that are scaly or bleed easily or ooze.

Zic recommends a thorough check, including the scalp and between toes, and having someone to assist with self-examinations. Any changes can be monitored by taking pictures of moles or spots, dating the photos and then comparing them, Zic said.

Starting at age 20, women at average risk for breast cancer—those with no personal or family history of breast cancer, no known genetic mutation linked with breast cancer and who have not had chest radiation therapy before age 30—should have a clinical breast exam every one to three years.

During the exam, a health care provider manually checks for lumps and other changes in breast tissue. Women ages 45-54, who are at average risk should also get yearly mammograms, and women at high risk should check with their doctor about starting mammograms earlier. Mammograms can detect breast changes that indicate cancer years before symptoms develop.

Breast magnetic resonance imaging (MRI) can be done after a mammogram to get a better view of suspicious areas and to differentiate between a solid mass and a benign cyst. At age 55, women should consult with their doctor about possibly having mammograms every two years.

Women at high risk for breast cancer may need to be screened earlier and more often than women at average risk. This includes women who:

An estimated 75 percent of head and neck cancers begin in the oral cavity—the area including the tongue, gums, insides of the cheeks and lips, and the top of the mouth. In just five minutes, a dentist or primary care provider can do a through screening. Because oral, head and neck cancers affect a diverse group of people, virtually everyone should be screened, said Sarah Rohde, M.D., assistant professor of Otolaryngology. A doctor will visually scan for ulcers, lesions and swelling, then feel the sides of the neck to check for masses. They will also likely listen for unusual hoarseness in a patient’s voice, Rohde said.

Although ovarian cancer is a rare cancer, it is the fifth most common cause of cancer death for women. No totally reliable early detection tool for this cancer exists, but tests and screenings are offered for women who are at high risk—those with ovarian cancer symptoms such as persistent bloating and pelvic/abdominal pain, a family history of ovarian cancer or a known genetic predisposition such as a BRCA mutation. One of three tests or a combination can be used to screen for ovarian cancer.

Prostate cancer can often be detected early, before symptoms start, by measuring the amount of prostate-specific antigen (PSA) in the blood. Another way to detect prostate cancer is through the digital rectal exam to check for suspicious nodules and abnormalities in the prostate’s size and shape.

Because prostate cancer usually grows slowly, older men who do not have a 10-year life expectancy and who are without symptoms of prostate cancer are not likely to benefit from screenings.

Lung cancer, most often caused by smoking, is the second most common cancer in both men and women, and it is the leading cause of cancer death among adults. Low-dose helical computed tomography (CT) scans, a series of detailed X-rays taken in a spiral pattern, can be used to screen for lung cancer in people at high risk for the disease. Patients considered at high risk include those 55 to 80 years old, smokers or former smokers who have quit but have had at least a 30-pack-a-year smoking history and ex-smokers who quit within the last 15 years. Lung cancer screening is associated with a 20 percent relative risk reduction in mortality among high-risk smokers.

A list of recommendations for both women and men.

If you have a family history of colon cancer or polyps, inflammatory bowel disease (IBD) or genetic disorders such as familial adenomatous polyposis, Gardner syndrome or Lynch syndrome, you are at higher risk for colon cancer.

A sigmoidoscopy can also be performed to examine part of the colon and rectum with a sigmoidoscope, a flexible tube with a small video camera on the end. The sigmoidoscope is just 2 feet long, so less than half of the colon can be examined with this procedure. Fecal occult blood tests can also be done either in a physician’s office or with an FDA-approved at-home kit. While these tests are less invasive than colonoscopies, they are also less likely to detect polyps.

More than 90 percent of all cases of cervical cancer are caused by infection by certain types of HPV, and the Pap smear or test is the screening for this cancer. Pap smears reduce the incidence of cervical cancer because abnormal cells on the cervix can be identified early and treated before they ever become cancer, and existing cancer can be treated early. Testing is recommended to begin at age 21 and to end at age 65, as long as results have remained normal.